On the way to Peasebrook

Saturday was another good laying day, with 8 pairs of rails in - another 150 yards nearer to Broadway. It was meant to be more, but a number of catch up jobs had to be done (correctly placing the sleepers hastily laid when the Telehandler developed a puncturelast week, straightening trackwork ready for ballasting, sleeper spacing et al) so that emptying all 300 sleepers off the two bogie flats as well was too much to ask. If it hadn't been for that tire... 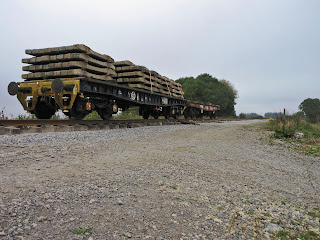 In the end, next to all the other work, one whole bogie flat was emptied and the sleepers on it laid, indeed immediately fitted with rails too. The other is still full and remains on site. A day of further sleeper loading is penciled in for later this week, but in this job flexibility is the watchword, and it may have to be ballast loading instead. We shall see.

So how far did they get this time? 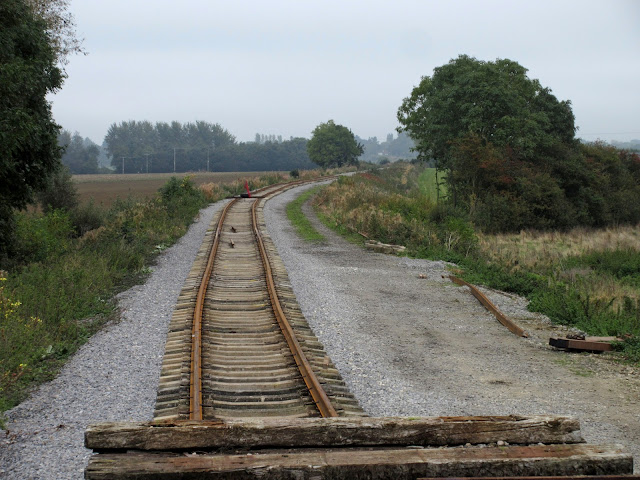 The Warflat is still parked where it was left last time, i.e. adjacent to the wider area here, to make unloading by Telehandler easier. The previous railhead was where the red flag is. 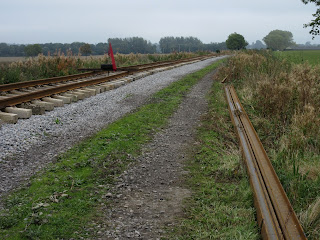 Next to it, a number of new rails are sited in pairs ready for laying, having been dragged off the rail wagons so that they can be reloaded - yes, another load of new rail! The rail wagons have therefore been taken back to Toddington, more of that later. 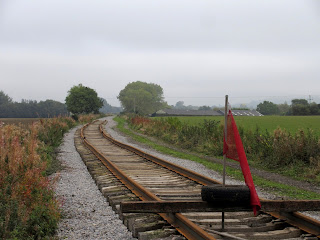 Here's the stretch laid on Saturday then, from the flag right round the long Little Buckland curve, and on to the straight leading to Peasebrook Farm and bridge 4. You might call it the 'home straight' to Broadway - the next curve is the one that takes us from the Childswickham Road bridge, right through the station itself. But that's still the best part of a mile yet. 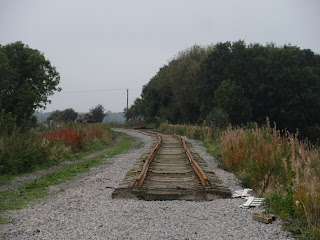 Looking back towards Little Buckland, you can see the red flag dimly in the distance, and last Saturday's 8 panels in front of you. 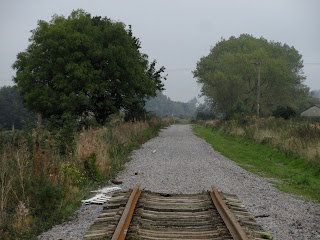 Looking forward, and with a fair bit of zoom on the camera, you can see the current target at bridge 4 where the ballast ends. Looks like a short stroll; actually it's almost exactly 500 yards still.

Once at Peasebrook Farm, we'll be into non running days, winter maintenance, and the need to advance the ballast along the last stretch to the station, and beyond to Springfield Lane bridge. 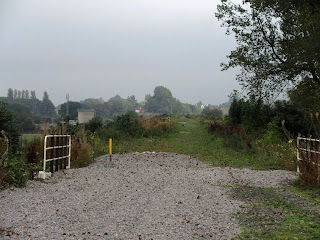 Here's the current target, bridge 4. It's an occupation bridge that used to link two halves of a farm, now owned separately.

The yellow post is a new marker put down to aid the alignment of the track as it is being laid up to this point.

Broadway goods shed is in the middle - red, with a big white door. 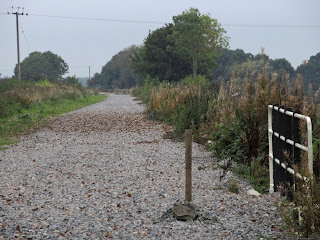 A last look back from bridge 4 - with some difficulty (click on the picture to increase the size) - you can make out Saturday's railhead at the end of the straight.

More track laying on Saturday, of course. But also hard work on Wednesday. The 6 Dogfish loaded earlier at Stanton will be dropped on the Laverton former storage siding (now plain line, without ballast), but before you can do that, you need to have your track as straight and as much in the correct place as possible. With 120 tons of ballast on top, it isn't going to move any more! The Wednesday team will be tweaking the track and straightening the sleepers, before the ballast train comes, in a window between two DMU sorties to the limit of operation. There's going to be pressure that morning, fingers crossed that they will make it in time.

Another two wagon loads of rail arrived on Monday. That's why the wagons at Buckland had to be cleared. 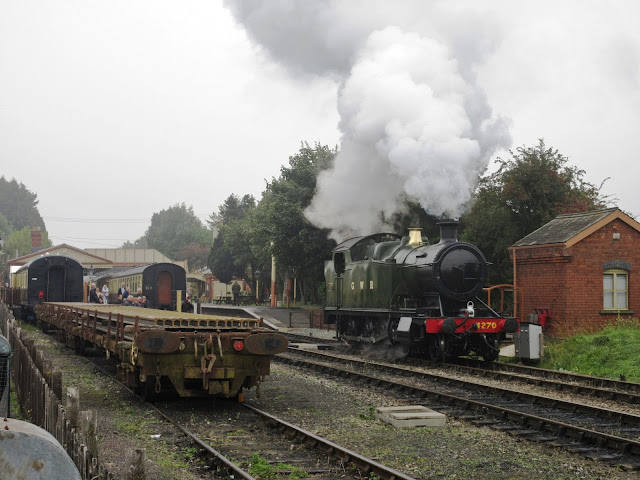 There's a great feeling here - a gleaming pile of new rail, a GWR heavy freight engine steaming out of the mist, and lots of passengers on the platform. Thank heavens our passenger figures are good. 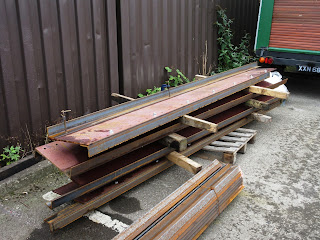 The station canopy frame is making good progress, and to date something just under half of the components has been manufactured and assembled.

Here is a pile of fascia boards made up, ready for riveting.

Work has been suspended for the moment as the workshop used, the former GWR goods shed, is getting a sorely needed rewire, to improve reliability and safety after 35 years of make do and mend.


At Broadway, there's been another delivery of the replica GWR platform lamp posts we have commissioned. 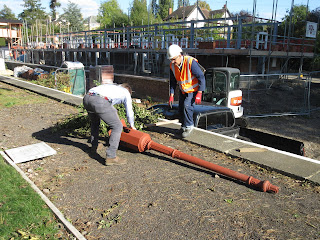 Here is one of them, brand new, straight out of the box. It's a perfect replica, and the railway owns the pattern, thanks to a generous sponsor. We now have 5 in place, with another two due to be delivered tomorrow. They are planted immediately, and the row on platform 2 is getting longer and longer.

When Broadway has been equipped, it will be possible to sell further copies to the general public, generating a small profit for the railway, so if you want one for your garden or to support your local GWR railway, get in touch. 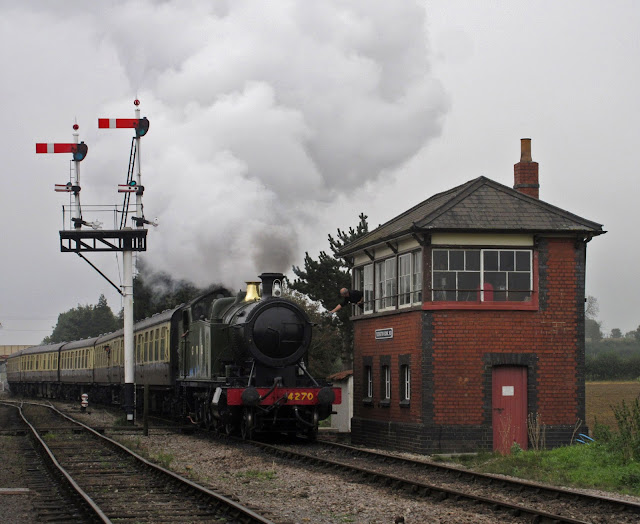 Finally, here's what we are all doing it for - GWR 4270 draws out of Toddington, past the box that we have replicated at Broadway.
The signalman is leaning out to hand over the token for the section to Winchcombe. It's cold, and there is plenty of steam as the loco starts to accelerate the train away.
Posted by Jo at 16:26