Steady as she goes - John was on drilling the holes for the timbers, through a very thick stringer.

Neal was cutting the timbers to fit. 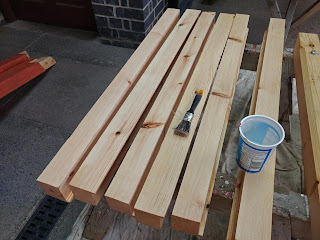 Yours truly on preservation fluid and painting. Six coats, not counting the top coat. Another coat of everything was applied today, we are inching on further. 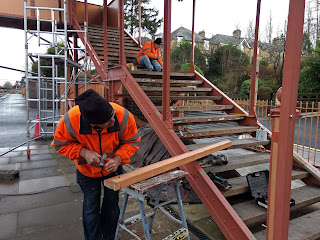 While John drilled higher up, Neal was cutting a timber to size. This has to go back and forth, with lots of little tiny cuts and shavings with a chisel, until it fits snugly round the roof hoops. 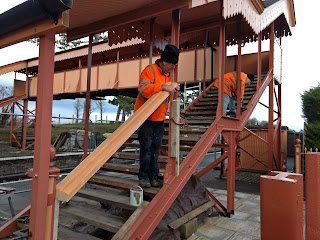 After a while the upper timber on the bottom was tried for size. 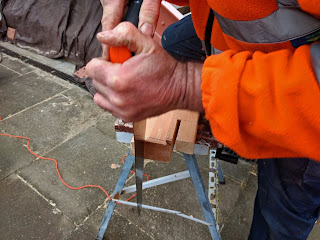 It was right at one end, now for the other. Funny how cutting with the grain is harder than across it. 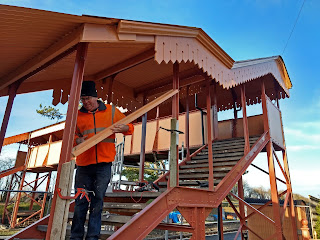 The bottom one is signed off, and taken round the corner for preservation fluid to be applied on the newly cut ends.

Then on with the second timber from the bottom.

We managed to work until almost 17.00 today, with a bit of sunshine towards the end lighting our way.

No Monday (part-) blog post, due to a funeral. In fact three at once in the circle of yours truly, all in the space of about 3 weeks. Is that because of the winter?

Just one degree above zero today on setting off, but minus one and a half between Toddington and Winchcombe. Add into that water running from one side of the road to the other, and that explains the 'POLICE' notice by the side of the road on the way back, and a Ford Fiesta with the front stove in inside the Didbrook turnoff. Dangerous conditions today.

Better stay in the cosy mess coach then, and drink tea until the danger goes away. By mid day the thermometer had reached plus 5 C, but in the many shady spots frost continued to lurk throughout the day, and this can catch out the unwary. 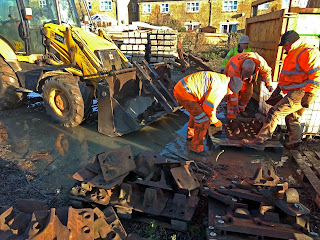 Of course we've had plenty of rain too, and because rain strom has followed rain storm, it never really drains away.

Here we are loading spare cast iron chairs into the JCB's front bucket, and the volunteer nearest the camera is ankle deep in water. Nice. 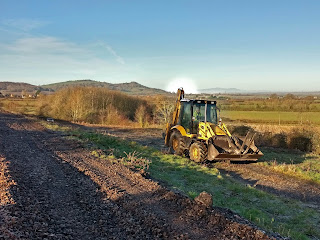 With only 1 Landie available (the other having a technical issue) we clubbed together in private cars, parked up in the pub and hopped over the fence (we didn't hop so easily at the end of the day, that was quite noticeable).

This allowed us to see Stevie arrive in the digger, followed at some distance by a little blue and white dot, the other Landrover. 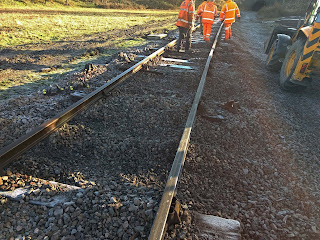 Your mission for today - should you wish to accept it - is to further dig out these sleeper beds, deep enough to accept the new sleeper and its chair, all of which must still fit under the rail without lifting it.

The ground was frozen, but harder than the light frost was the cement like compaction of 40 years train travel, on a poorly drained base (from the early days of course). 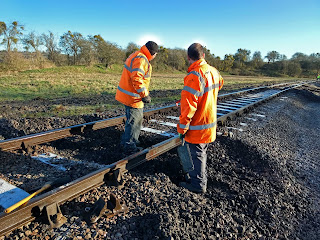 Jack and Neil here are doing just that - digging out the beds as a first stage to reinserting the replacements. 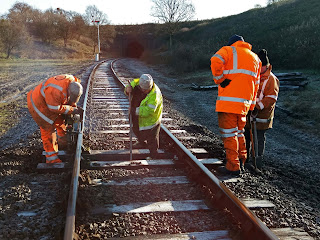 We then settled down to +/- two teams, one inserting the new sleepers and chairing them up, the other team following on behind and applying the Panlock keys.

Bert Ferrule here is tightening the chair screws with the impact wrench, while Stevie (in yellow) is tweaking the sleeper into a better position, parallel to its neighbour. 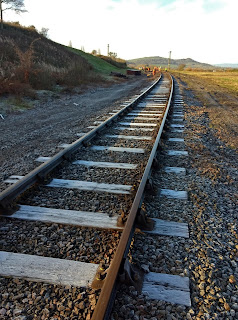 This shot shows the frost on every sleeper. Not so thick, but enough to hide the crosses we put on the ones that need replacing.

The shallow cutting here never saw much sun during the day; the best the sun could do was slide along the top of the cutting, leaving a long dark shadow so that the frost remained in the ground on the left. 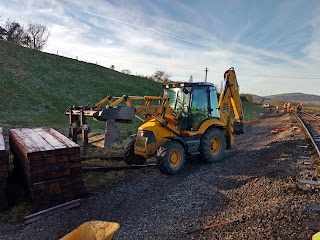 When enough beds had been dug out for the day, Stevie went to collect the first bundle of new sleepers. As we have only a tiny budget, these are actually left over from the Toddington relay last year. 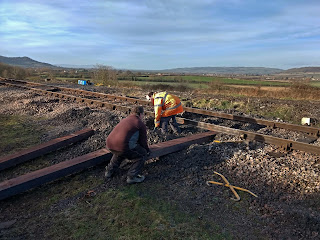 At one point Stevie actually got out of his cab to shove one in (sleeper nips not required by him) and this rare event was captured by a passing camera.

So yes, he does get out of his nice warm cab sometimes. Here's proof. 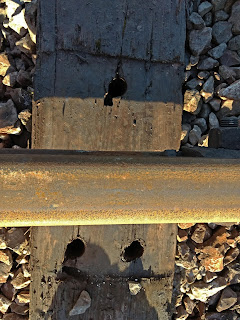 This sleeper looked half decent at first sight, but in fact has holes that have worn oval, which allows the gauge to spread and generally move around. It was dug out and replaced. 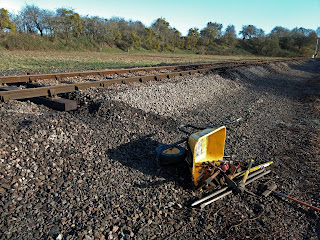 Playing pick up sticks at home or with a wheelbarrow on the trackside has the same conclusion in either case - disaster!

When Chris put the heavy Pan puller on top of everything else, it went.

Dang - all you can do now is give up, and go back to the mess coach and have your lunch. 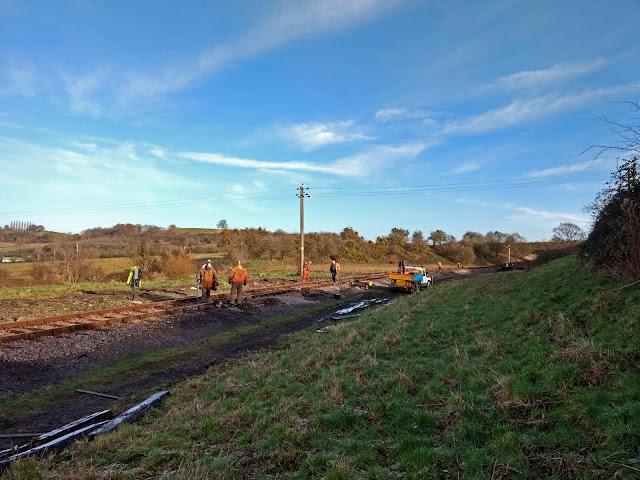 After lunch there was a further surge of activity, with the whole team now well spread out along the affected stretch of track. But in fact this shows how well we were doing today. Counting from the group in the foreground and then back to the tunnel mouth, 54 sleepers had been changed and keyed up at this point, mid afternoon. More were in preparation, and more were completed post camera shot. We think we are something over half way now. 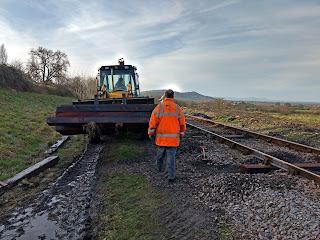 In fact mid afternoon Stevie had to go and get another pack of new sleepers, and distribute them with Jack here along the line.

Note the wet patch again, a place where Steve got stuck last week while unloading from the bogie flat. 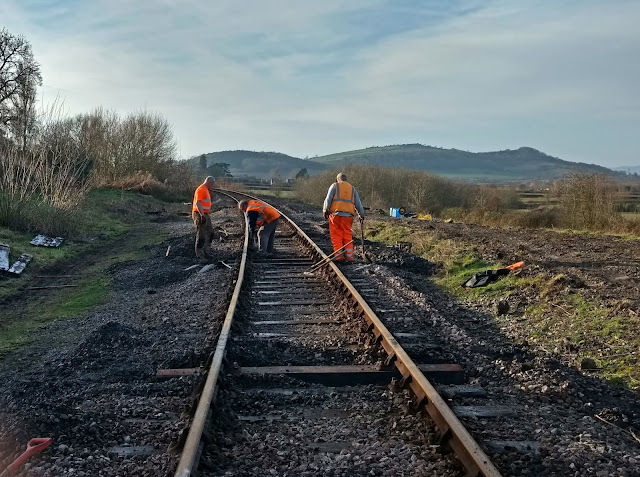 Our last shot of the day, with the 'younger' members of the team (young - ha!) still hard at it.

In the background is the curve before the straight leading to the former Gretton halt. 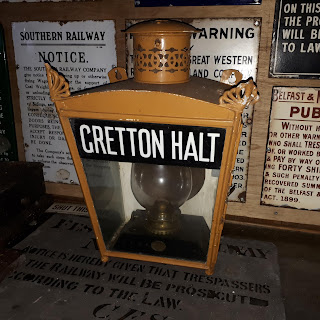 On that subject, a bit of history, for here is a picture of one of the original oil lamps that used to be fixed to the back of the platform at Gretton.

It's quite a find. There were only 4 of them, and it's the first time we have seen one. It's from the former Winchcombe railway museum, currently not operating and hence a private collection.

It's odd that the halt at Hayles Abbey used hurricane lamps hanging from a hook, a much cheaper and less appealing option.