To the finish line

So-so weather forecast - painting under the centre span roof should be OK.

We managed OK, the occasional light shower did not interupt us under that tin roof. 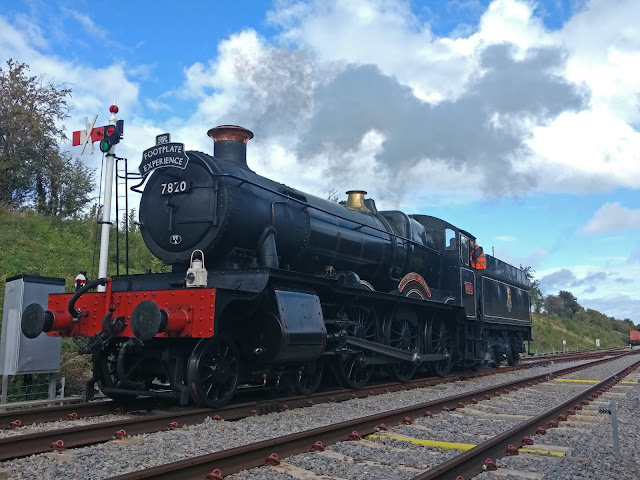 Then the Fire & Drive train arrived, and you can see its locomotive - newly returned Dinmore Manor - running round here, seen from the Broadway mess hut.

OK, OK so yes, we were drinking tea in there. You're allowed a break, aren't you? 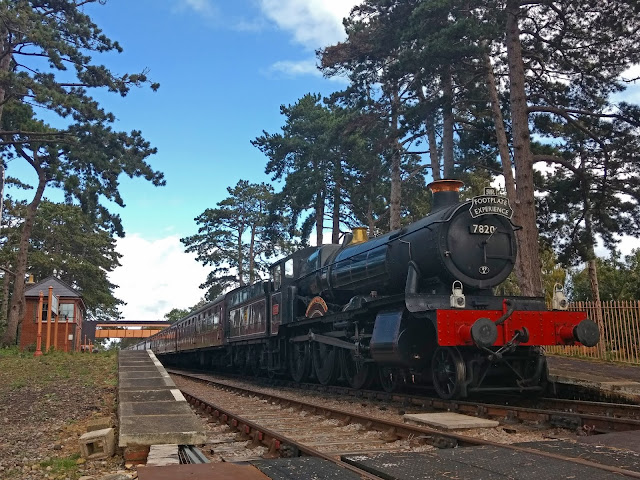 After a smart run round, using the newly repaired turnout at the south end, Dinmore was on the front and ready to go again. It didn't take long. 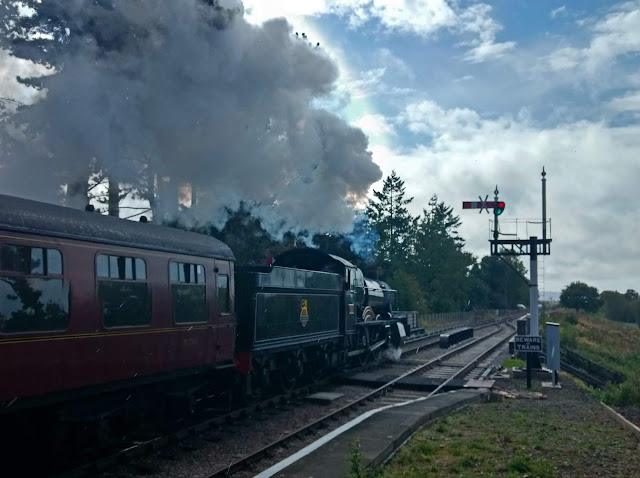 And thar she blows - Dinmore took off at a fair lick, with more applied quite audibly after reaching the end of the 10mph speed limit. Nice to hear, that. 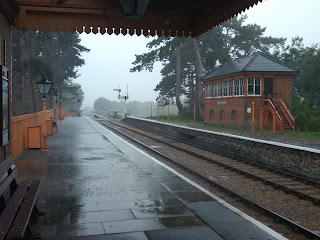 We were then at the receiving end of an appalling downpour. Rarely seen so much water at once. 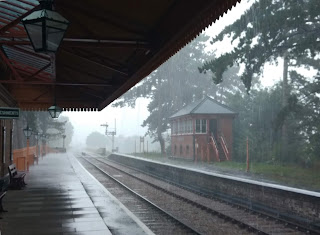 It got worse too - notice how the signal box gets dimmer.

Harder to see is that the canopy guttering was completely overwhelmed, and water started to come down in sheets, straight on to the trackbed.

Our guttering is of a smaller section than on the original station. 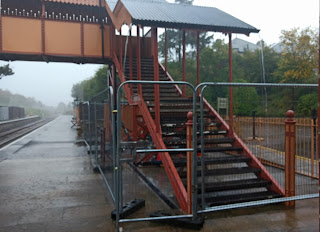 Usually when it rains, we don't see much water in the (unfinished) gutter at the end of the step roof, but today there was a pair of waterfalls left and right. 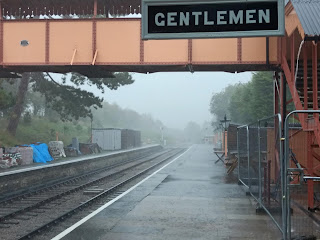 Springfield Lane bridge is also out of sight, lost in the mist of falling water. 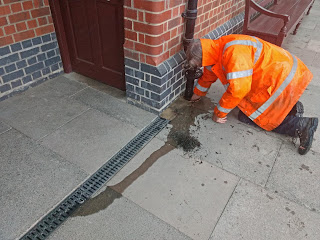 We sheltered under the canopy, where there were still dry areas, but noticed that water was welling out of the ends of the canopy downpipes.

They were clogged with pine needles.

An hour later the sun came out, but the kettle of paint we were using on the bridge had a quarter of an inch of water on top of the paint, rendering it unusable.


Saturday out on the track

We're on the home stretch for the first stage of measuring the track assets, as we near Gotherington. 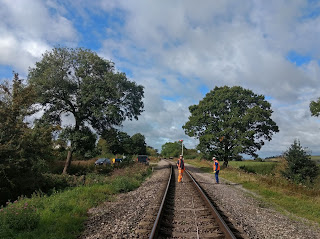 Last week we left off at Three Arch bridge, so today we resumed there, here looking the other way. 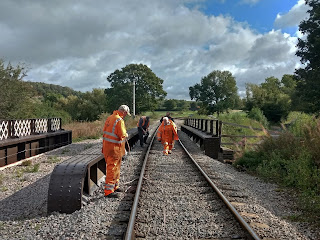 We were soon on the skewed bridge over the road. As the trains on today's timetable meet here, we only had to think of the one time in each hour for a train to appear. If they are on time, of course, you need to stay vigilant.

We took it in turns to keep a lookout, so here is Richard, in a very racy hat.


It's no use keeping a sharp lookout, if you don't vacate the track on hearing the warning. 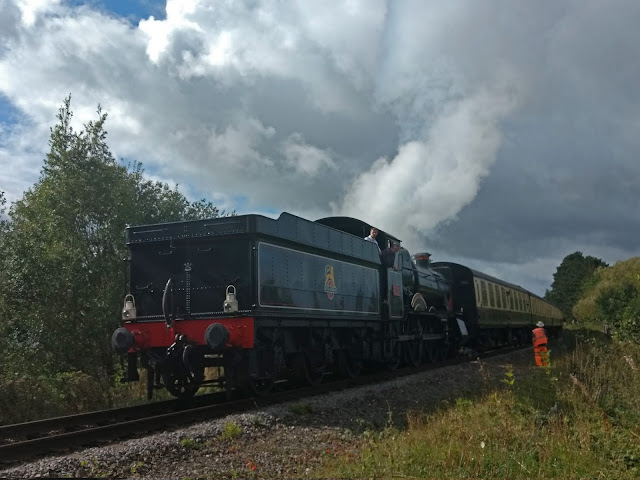 Here's that train. It's an up train from CRC. The down train picture was spoiled by the position of the sun, and now Dinmore is tender first. Dang. 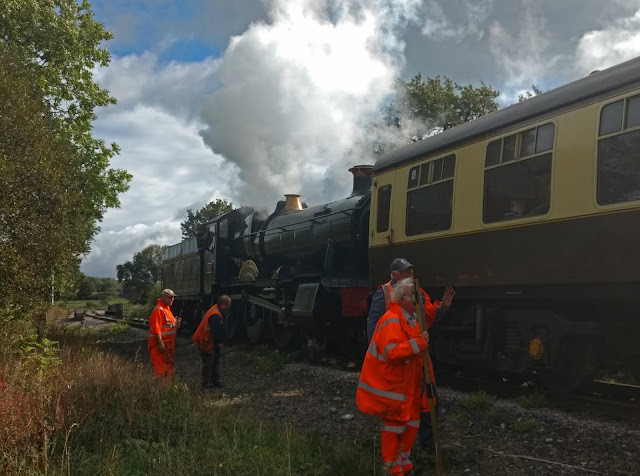 Here Dinmore is accelerating out of Gotherington, and is about to pass over the Skew bridge. On board are the eager customers from CRC, on their way to Broadway, so we give them a wave to be friendly. 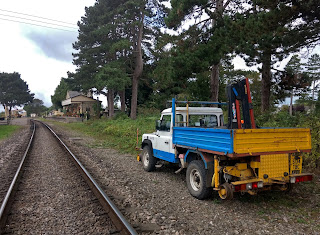 Further round the curve, and Gotherington station is already in sight. Our line occupies the down side, as the up side platform is (mostly) private. We can drive the Landie through though. 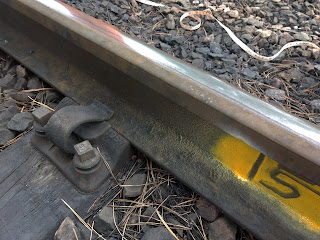 In this area there's an interesting track fixing that we hadn't seen before. It's dated 1958.

Anybody know what they call these? And why don't we see more of them? 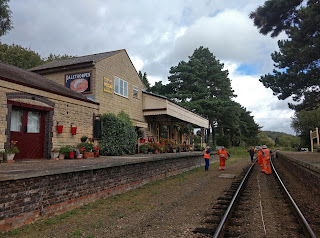 A little milestone for us is reaching the next station after Winchcombe: Gotherington.
The modern extension in Bradstone, in the middle between the main station building and the little goods shed, is very prominent. Unfortunately it was already up when the current owner purchased the property quite a few years ago now.

The canopy was truncated by BR by about 2ft. The reason is not entirely clear but it may have something to do with the property line when they sold off the station building. The platform is private; the edge is GWSR property though. 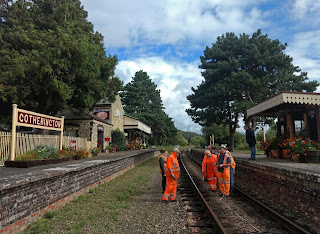 The platform shelter on the right is a freestyle one, also made of Bradstone. The original P2 waiting room was rather larger, as at Toddington. 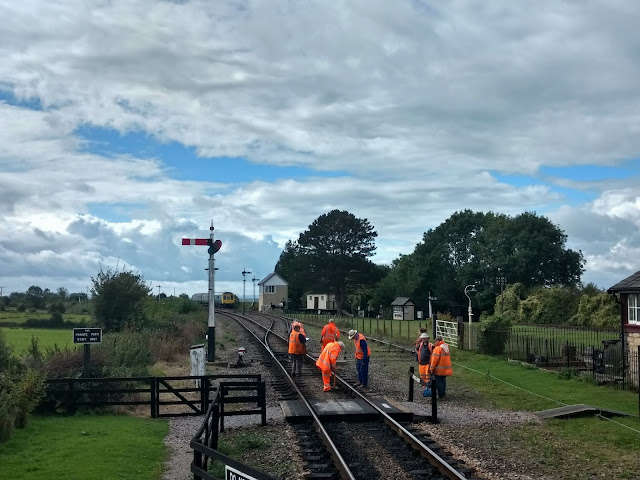 This is as far as we got before lunch, the northern end of Gotherington loop. With 3 trains in service today it's here that trains cross (as well as at Toddington). The DMU is waiting for the down train to arrive, stopping first at the platform. 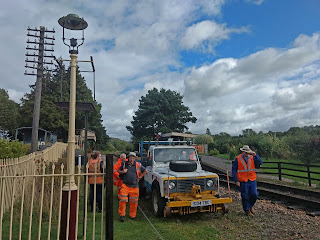 And this is as far as you can go with the Landie trackside, before running out of room. We parked it to one side a bit to let the down train get by comfortably.

The yard lamp on the left is thought to be relatively rare, as it has its original ladder and platform. 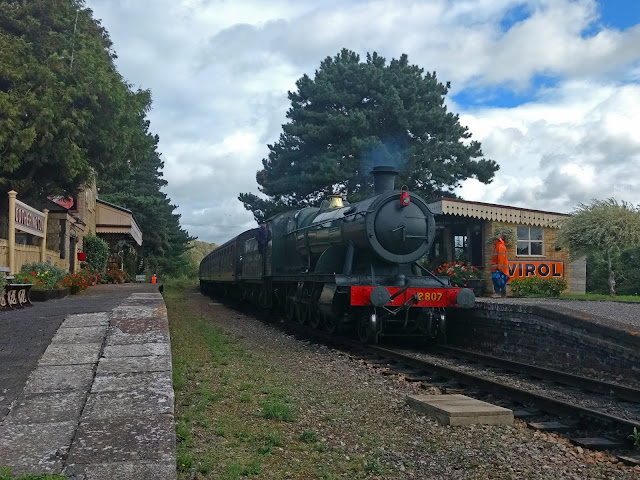 Finally the down train, the third train in circulation today, headed by 2807, arrives at the platform at Gotherington. Behind the camera the DMU is still waiting in the loop. 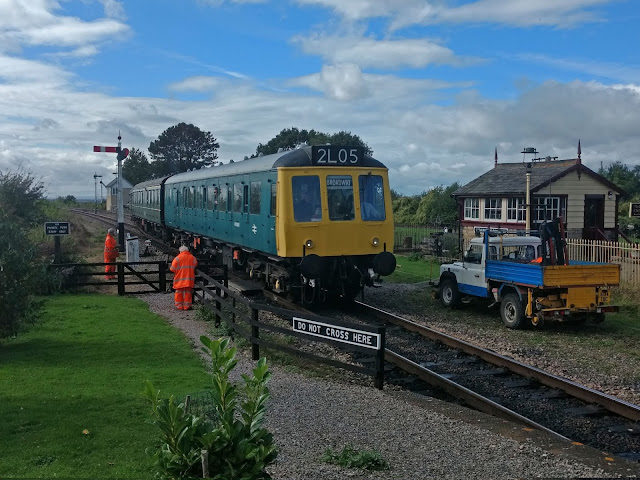 With the down train finally off to CRC, the DMU is free to resume its journey north. It too will pause in the platform first though. 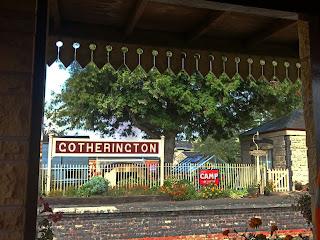 After all the traffic had gone, we broke for lunch. There was just room for us in the little Bradstone shelter, although things were a little more realistic across the tracks. You can visit Gotherington station on special days, such as our wartime weekend, but otherwise it's someone's house, so please respect their privacy.

Mrs. B treated us to a box full of delicious cupcakes today. We particularly liked this one, with a Malteser chocolate button on top. We can report positively on the taste, although we had to consume several to be sure.

No cupcakes were injured in the making of this photograph. 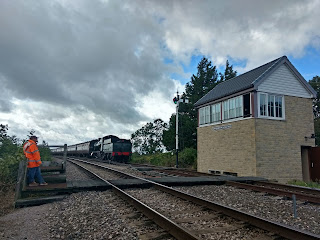 After lunch it was the loop. Our target was to measure down to the southern end, then back up.

The other measuring team, working on Wednesdays, started their measuring at the far end of the loop, so with a bit of luck we could join up the two sessions. 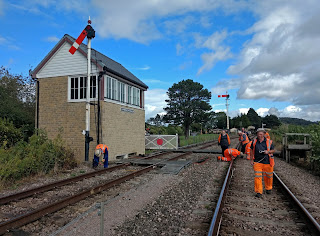 Here we are then, on the through line of the loop. Bert Ferrule is right down low, as we need to identify every weld on the rails (and there are quite a few, as this is second hand rail). The Flash Butt welds (no dirty jokes here please, it's a welding method) are particularly hard to find.

The loop line bears some mystical marks, which we presume have something to do with the tamping here, although having accompanied the tamper last year, the crew didn't write on the rails, relying simply on their cabside instruments. 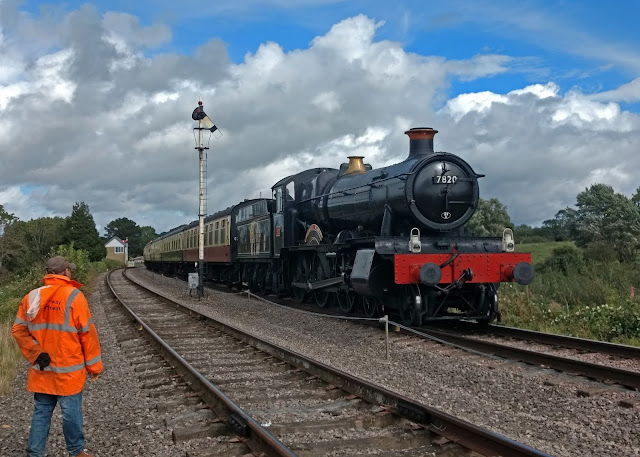 After reaching the end of Gotherington loop (and the start of measuring by the other team) we turned around smartly and worked our way back down the loop line.

Here is Dinmore Manor pulling away after receiving the token from the signalman.

At the end of the afternoon we had indeed got back to the northern end of the loop, and with the exception of the pointwork that concludes the section from Stanway viaduct to Hunting Butts tunnel. A great effort, and teamwork between Saturday and Wednesday.

Still to do: Northwards from Stanway viaduct, and possibly our sidings as well. We'll see. 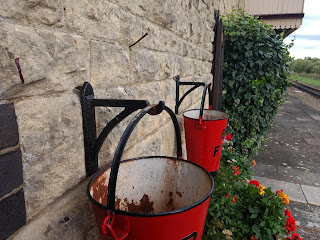 A quick look at Gotherington station and its fire buckets. These brackets are different again from the three different ones we have for Broadway.

We need another two brackets for Broadway - can anyone help? 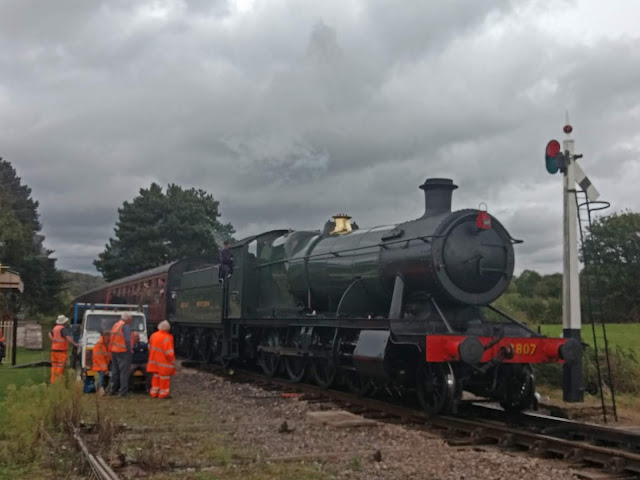 Before returning home, we let 2807 past so that we could turn the Landie round. The sky was starting to look rather menacing, storms were forecast for the south west and rain for us within the hour.