Straight back to work

Back from the hols, and straight back to work! It's good to be back though.

At a recent auction at Bloxham we managed to pick up this set of three original GWR bench ends for a friendly price. Always useful to have, and these are a bit special as they have the pierced uprights, which you don't see too often, and which you can't buy as replicas. 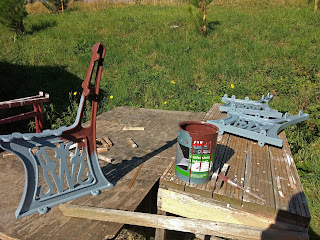 We've had them shotblasted and primered, so Friday being a nice sunny day we applied a coat of chocolate undercoat to them.

The wooden planks for them are also being organised, so this triple bench should be ready for next season. 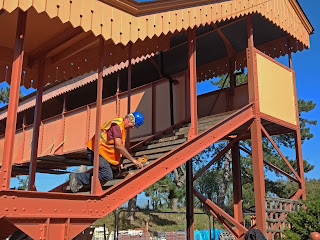 Neal spent the day on the P1 steps, bolting down more of the treads. You see him about half way up the second half of the steps here. 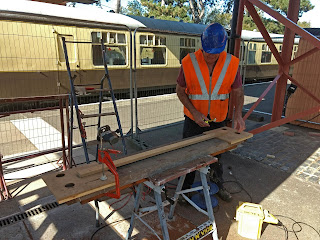 Each tread has to be taken down to a preparation area below, where new holes are drilled and countersunk.

The location of the holes is standardised with this overlay that he built. 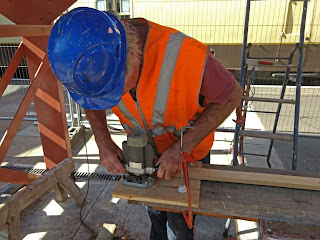 First the countersunk area is drilled out using a router.

The actual bolt hole is drilled through once the tread has been put into its place, then the tread is bolted down. 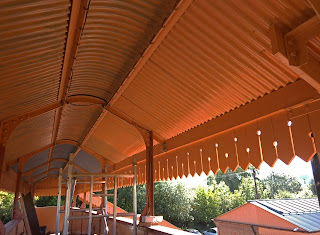 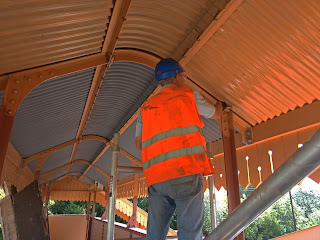 Upstairs on the centre span John was applying a second undercoat to the area on the Malvern side of the roof.

As we have that big pile of T&G boards up there and it's in the way of our platform, we decided to paint everything at one end first, then move the pile of boards to allow the platform to be pushed along to the Cotswolds end.


John was doing well on Friday, and was on the way to completing 3 of the seven panels in two layers of undercoat.

Yours truly will resume on Monday with some topcoat here. 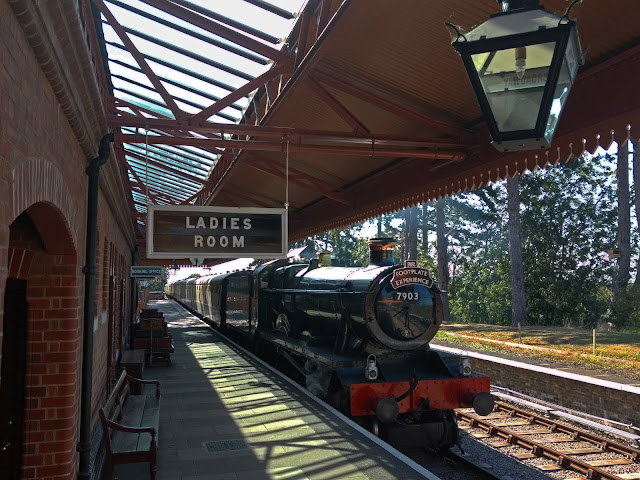 At lunch time we had a visit from Foremarke Hall with a fire and drive train. This rumbled very carefully into the station. 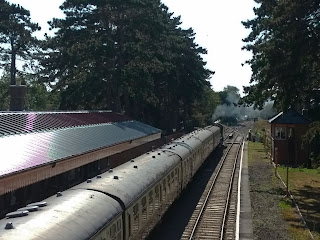 And then it was gone again, peace resumed and so did the painting. Ships that meet in the night...

A small but efficient team met this morning - just 6 of us. Holidays still affect us this time of year, and others were busy with our new office acquisition in Winchcombe yard, now known as Churchward House. Nice. The chief doughnut supplier was on a cruise, so were were forced to raid old supplies of stale ginger biscuits. Needs must. They weren't very nice, but they were still biscuits. 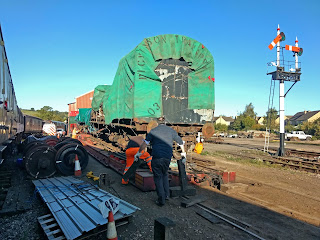 Outside by the C&W shed there was an interesting development, as a low loader had arrived to take away the second of the two wrecked GWR bogies that used to be parked near the yard entrance. This second one, almost a flat pack now, has been waiting to go for ages, but finally it was possible to move it. We wish it well on its new (private) site. 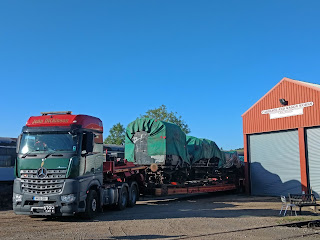 Loading that coach went just fine, but getting the combination back out of the yard, that was tricky. We watched the manoeuverings from the mess coach, with mugs of tea in our hand.

The problem was a lot of C&W spares parked in the awkward bend around the corner of the building, and even with rear wheel steering the combination struggled to get back out. But they did it in the end, so well done that driver.


As a team we are continuing with our lengthy job of recording the track from end to end. This team of two is doing the middle of the line, as we kicked off today at MP 14 near Far Stanley. That is out in the middle of nowhere, a very rural stretch near the Prescott Hill Climb.

Getting there was already problematic, as the low loader was blocking our exit (the Landie had to travel up the trackbed to Toddington to get out) and our usual route through Gretton was also blocked, due to water pipe 'rehabilitation'. What a strange use of the term, it sounds like the water pipe was a bad seed, and has just come out of jail! 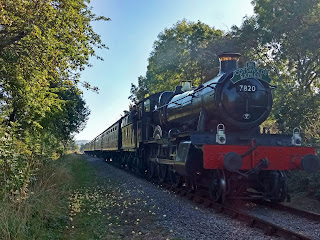 Here's our kick off at Far Stanley, and by the time we got there the first service train, now headed by Dinmore Manor back from gone away, was already passing through. This stretch of track must be a mile long, and we think we have some of the best sighting lines in the industry. 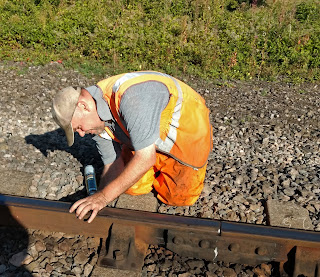 A team of six is one less than the minimum we like, but we managed by sharing the jobs. It's just a bit less efficient.

Here Bert Ferrule with his tin of spray paint is just applying a number to the track panel. We reset this to 1 every quarter of a mile. 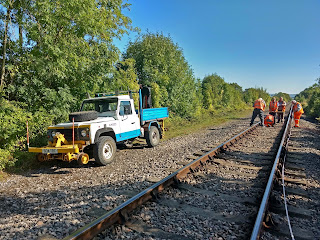 This is the long straight stretch at Far Stanley. It's so long that it's a bit disheartening if you are doing any work on it that means getting to the end e.g. laying it in the first place, then fishplate greasing it, and now measuring it.

The oldies relate that it was the same at Toddington when they first started laying track south. Didbrook bridges seemed so far away, even the first bend seemed far away, and some thought we'd never get there. (well, they were proved wrong) 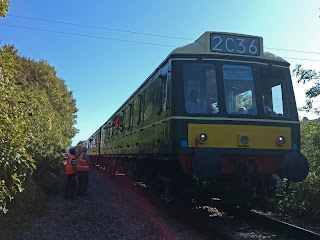 We had two steamers and a DMU out today. Here is the DMU passing through for the first time, and the Trust chairman, a former PWay gang member, is leaning out of the window and has some useful words of advice for today's gang... 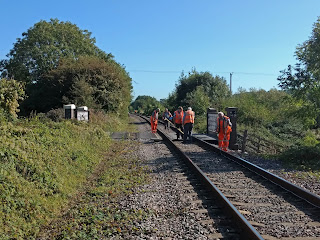 Finally we too made it to the end, because here in this picture we are just getting round the bend between the Gretton straight and the next long straight bit, the Dixton cutting. 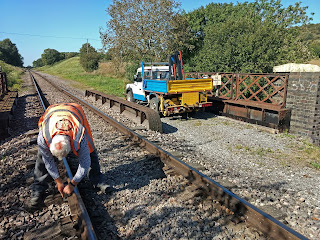 A little further along is the bridge over the Prescott Road, where Neil is seen measuring the wear on the rail head. 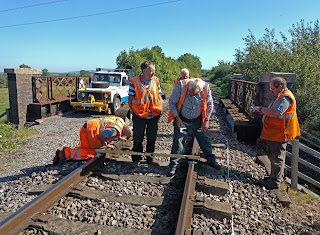 The others soon caught up.

Steve has the track gauge, Bert Ferrule is double checking the fishplate for any cracks, while Nigel is carefully noting down all the results on to a spreadsheet. 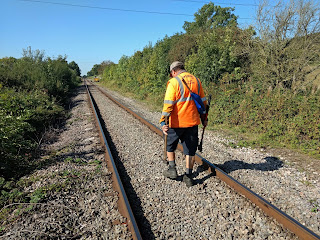 Someone else who caught us up was Dave here, who next to working with the gang regularly also has this stretch of track under his responsibility for his track walks. Any loose fittings can be hammered back in as he goes along, while anything else he finds is noted down for his report. 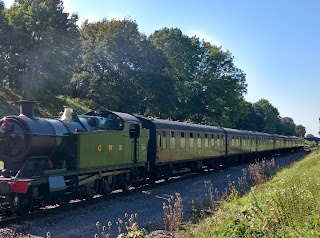 The second steamer today was 4270, here with the maroon rake.

The light is awkward here, into the sun. There are also times when the smartphone camera doesn't immediately react to the click, but has a little think about it first. In these few seconds the locomotive of course has started to move out of the picture! 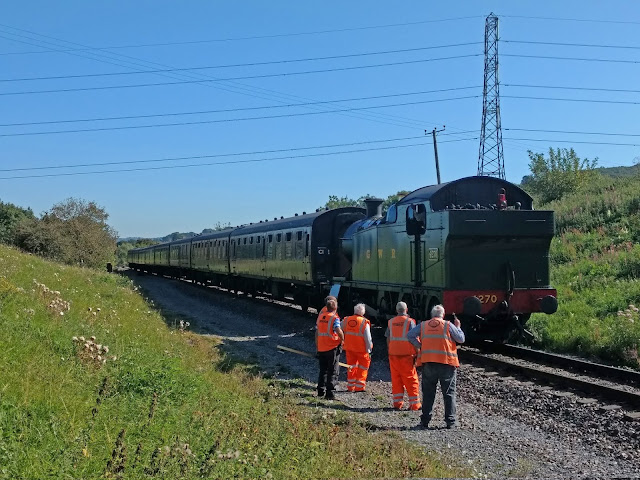 When 4270 came back south we had moved a long a bit, and we found ourselves underneath the high voltage transmission lines. They transmit a constant, angry buzz, a bit unnerving really. Wouldn't like to live underneath them. 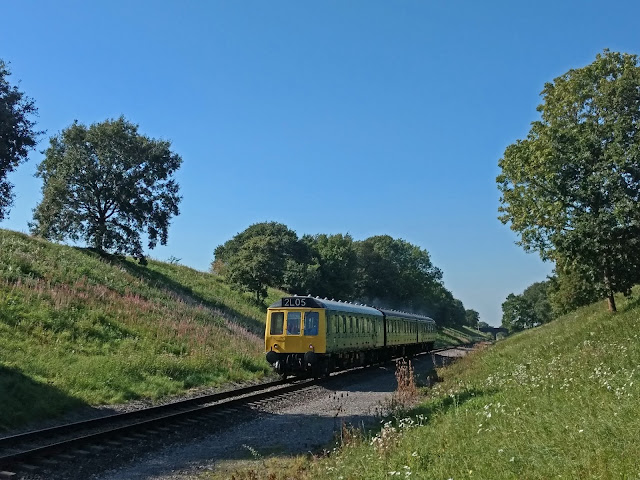 Further into the long Dixton cutting we met the DMU heading north. Three arch bridge, near Gotherington skew bridge, can be glimpsed in the background. 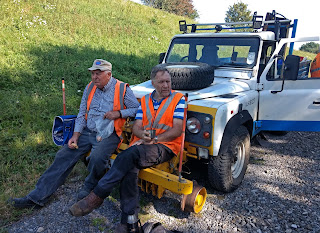 For lunch we picked one of the few shady spots in this area. The front of the Landie makes a handy bench for Neil and Steve. The greenery is riddled with brambles and doesn't make good sitting, so it's this, or a bridge parapet, if we are lucky. 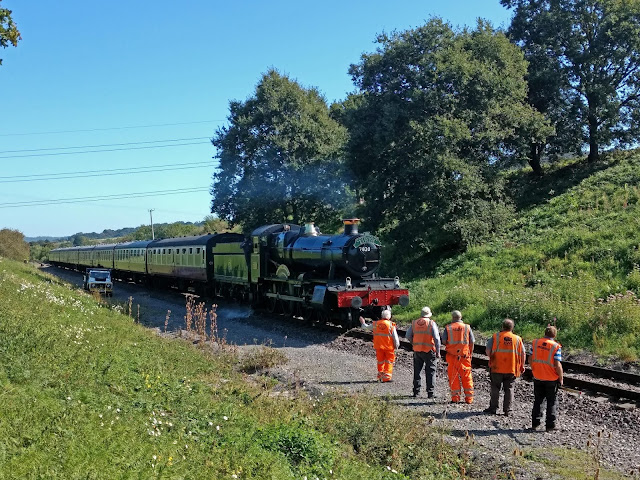 Just after lunch Dinmore Manor came by again, so we stood respectfully to let it pass.

All these photographs are taken from the up side where the gang stands to let the trains pass, and in the morning that means taking pictures against the sun, hence the shadows.

About in the middle of Dixton cutting is this interesting culvert, a stream that passes under the line. It's one of the rare occasions that the railway cutting has pierced the normal line of the stream bed when excavating the cutting in 1905. 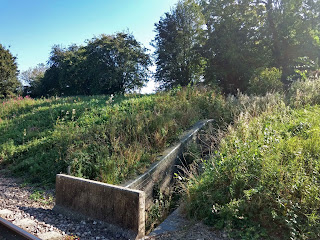 At Stanton the answer to this was to carry the stream across the track on an aqueduct, whereas here at Dixton the engineer's solution was to allow the stream under the track, but 'early' as it were. So on the down side we have a chute from the edge of the cutting, leading to a pipe under the track. 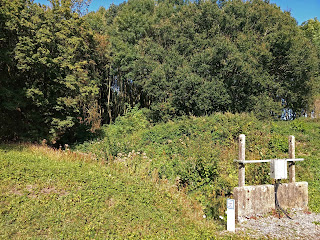 On the up side, the stream is now lower than the bottom of the cutting, and a deep 'V' shaped ditch has been cut to allow the water to continue running downhill, to a lower level beyond the trees. 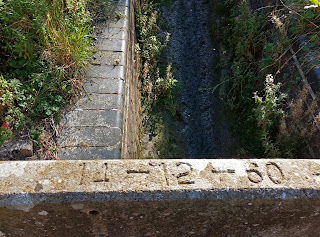 The down side concrete parapet for this little culvert carries the inscription of the date it was built, beautifully pressed into the wet concrete.

This was 9 months after passenger services came to an end on this line.

Out of sight to the right is another inscription giving the location - 14M 60ch. 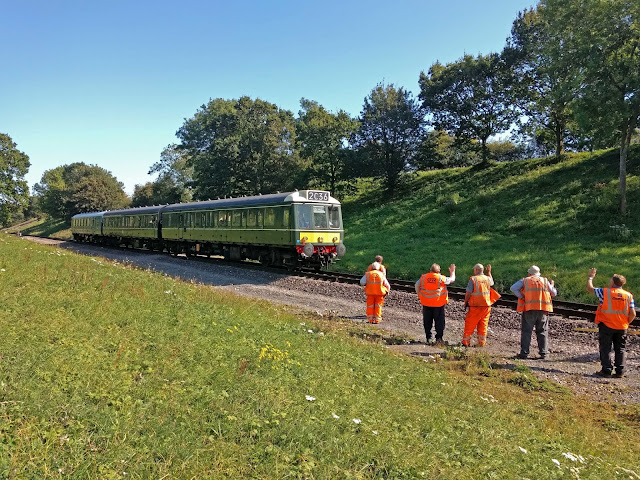 Another meeting with the DMU, in a part of the Dixton cutting that is unusually wide. It's almost as if the engineers intended a station here, but that isn't true of course, Gotherington is only half a mile away round the corner.

The most likely reason for the effort expended here to make this cutting so wide is that material was needed for the very long embankment on which the line runs in the Gretton area. So it's a sort of borrow site, a quarry. The spoil would have been excavated by a steam navvy, and taken away by means of the little contractor's railway and dumb buffered tippler wagons. 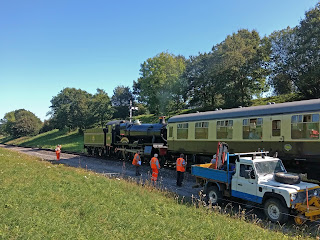 Dinmore passed us at the Gotherington outer home. the angle of the sun prevented a frontal shot, and it was running tender first too, hence this passing shot. 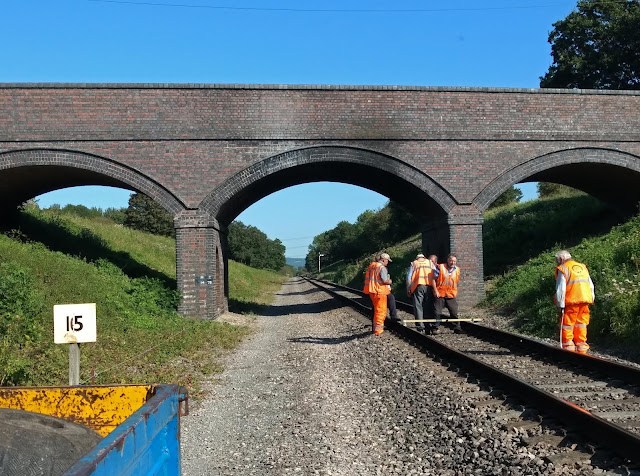 We finished the day here, at MP 15. It's just by three arch bridge, wonder how it got that name?

MP 15 means we did a mile today. That's less than last time, but still a pleasing effort a there is a lot of rail in this area that came to us second hand, with many welds within each panel. We treat each welded piece as a single rail, so this means much more measuring than last week.

The mile post is a steel one erected in the early days, but we do have a supply of replica wooden GWR ones, which just need numbering and fitting. When there is time.

Next week we hope to reach Gotherington itself, with the loop to do there as well.