Why pay to go to Spain?

Why indeed pay, we have our own hot weather here. It's what we wished for all winter, so don't complain now that it's here. There was unrelenting sun today, but we found bits of shade here and there and 11 of us had a good time on the railroad. 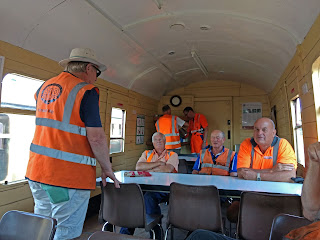 The day started with a familiar shaggy dog story, which as you now know ends in the 'multi story carp ark' .

While waiting for the tea to be poured in the background. Peter, Rick and Martin listen spellbound as John works his way towards the distant punch line.


Having been to a recent Rail Live event at Long Marston recently, Jonathan came back with a bag full of goodies. To be fair to us all, he decided to raffle them off to those attending this morning, so we all drew a number to see what we got. 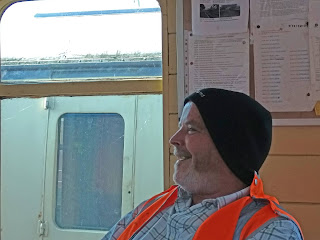 Mike drew a bit of a short straw, as he won a nice warm hat... Patience, the day will come, it will come, Mike. 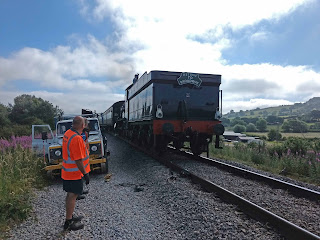 We were basically working on a defect list south of Gothrington, but while your back is turned other defects turn up and one such was a loose bolt found on Chicken Curve.

Hence we loaded up the heavy generator on to the back of the Landie and headed half a mile north.

We waited for the first train of the day to pass, then cut off the nut, which had seized with the bolt loose. Another one, like last week. Strange. 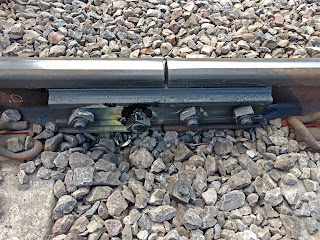 Here's the new one going on, surrounded by the yellow marker paint for the old, seized on solid. A quick burp with the 'animal' and it was job done. 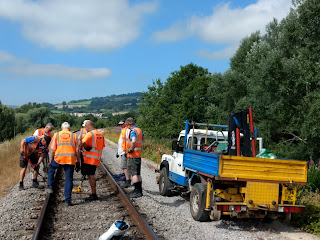 Or no it wasn't, because diligent eyes then found a new loose clip nearby. We had all the gear with us, so it was quickly jacked up, a thicker pad shoved underneath, release the jacks, bang a new clip back in and it was off to Gotherington. 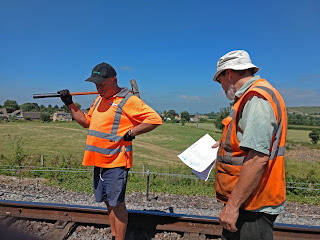 At Gotherington Manor Lane we were all raring to go, but first to understand the hieroglyphics of the track walker's spreadsheet. Hmmmmm. 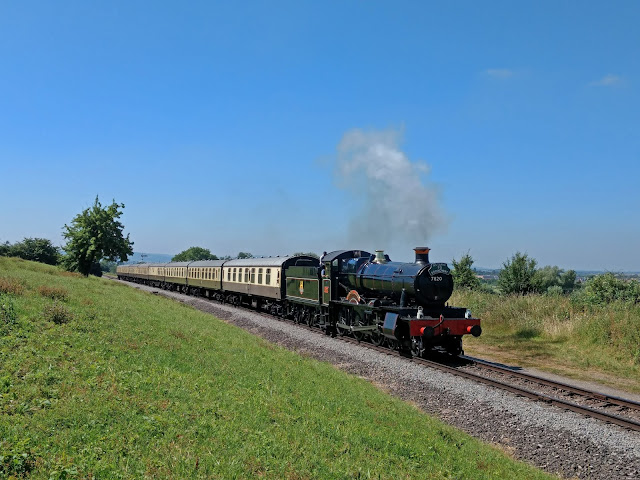 Then the train came. It was the first one ex CRC, and it was well filled (others later in the day less so, and the DMU was only modestly occupied).
Here's a nice shot of Dinmore about to enter the curve leading to Gotherington loop. We learned that this loco was running this week as it had a better ash pan, thus limiting the risk of lineside fires. 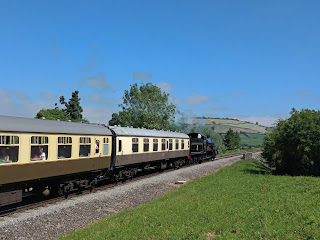 The passing shot, as the loco runs over Manor Lane underbridge. No bridge strikes here! 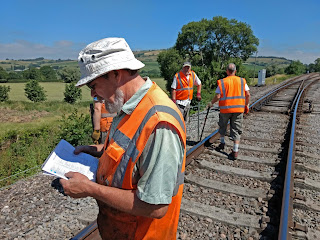 Then Dave consulted the runes again, and it was decided we needed to be north of Manor Lane bridge.
Half of us replaced some clips at the start of the loop, the rest were nearer the bridge on a second lot. 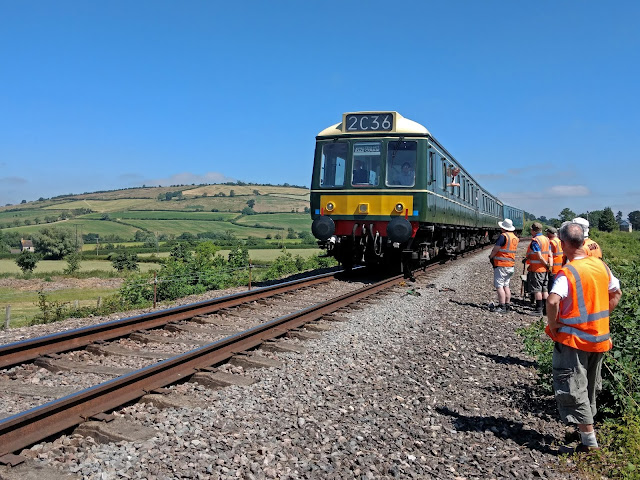 After crossing at Winchcombe on the two train service today, the balancing working eventually reached us at Gotherington in the form of the DMU.

Isn't that a beautiful hill in the background? One of the typical features of the Vale of Evesham, once the bed of the meandering river Severn over the centuries. 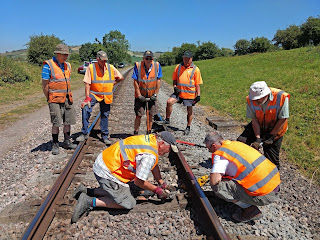 There were moments when not all of us could be employed at once, such as here when a better pad is inserted under a rail. Plenty of advice is always freely given by those that watch. 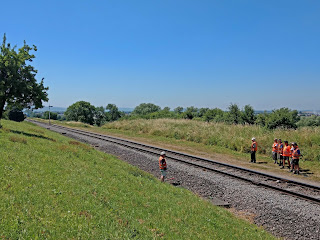 Came the DMU back from CRC, and the gang stepped aside, to be told another joke by John from the other side. 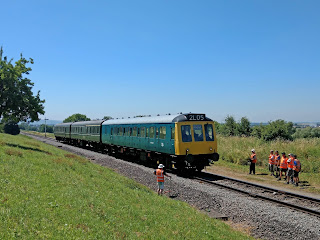 The joke was terminated early as the DMU intervened (Saved by the DMU, some were heard to say) 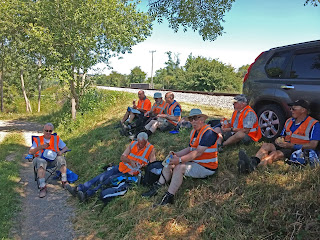 There was a wonderfully shady spot by the access gate, and this was selected for our picnic lunch. Rob (L) had thought ahead too, and was the best seated among us, many of which struggled with the prickly grass and young brambles. 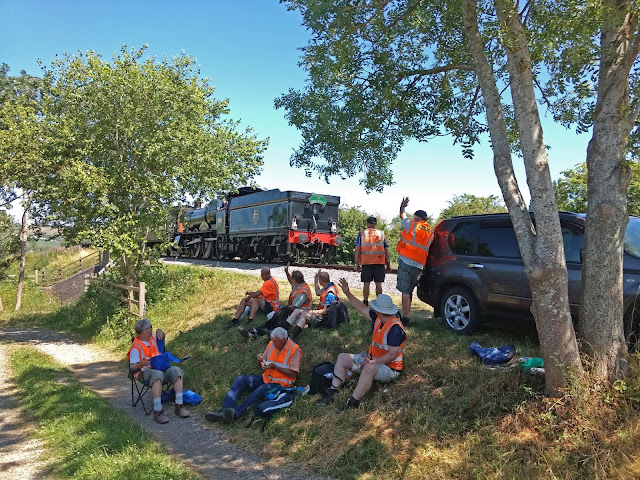 We said 'Hi' to the crew of Dinmore as she drifted by our picnic site. 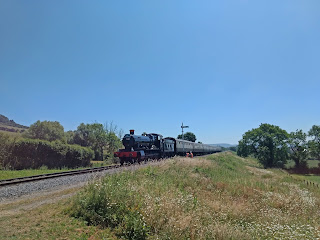 We slowly worked our way south towards Bishops Cleeve in the distance, mainly changing clips and pads that had worked loose, but also doing some ballast shovelling on a stretch with surplus ballast, where the position of each clip could not be seen by the track walker. This was the hottest bit of the day. 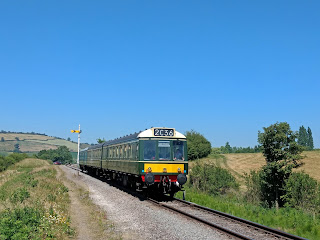 At 3 o clock we decided to knock it on the head, given that we had to drive back to Winchcombe, put all the tools back and lock up the site. Four o'clock saw us on the terrace of the Coffeepot, our reward after a hot day under a pitiless sun. Tea, and a peppermint Magnum - bliss !

After last week's fishplate greasing session with 4 gangers, we put out a desperate appeal for one more ganger, please, all you have to do is put your boot on the other end of the bolt the man on the machine is trying to do up.

We did get a result to this appeal, but not the one expected: one fewer ! 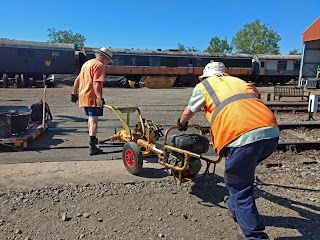 After hesitating whether to give up or plough on, the latter option was decided on. Three of us on site then. Luckily the machines were all out from last week, so all we had to do was get them on to their trolleys, using these wheels. 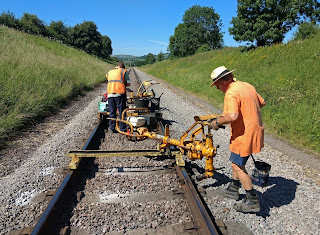 We're now out of Chicken Curve (lovely, with its 120ft lengths) and well down the long Defford straight. Annoyingly, this was laid with short 45ft lengths, thereby multiplying the number of joints we had to handle. We set ourselves a lunch time target of reaching a tree with a nice shady place under which to have our lunch. 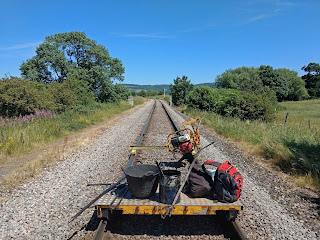 The spot we were aiming for is the smaller bush on the right. It was the site of a concrete bin for gravel for shovel packing, left over from BR days. We sat on the rim of it and chewed our snap.

To our amazement we were suddenly the witnesses of nature's hunting party, to wit a little stoat after a large rabbit. The stoat followed the rabbit 5 yards behind along the other side of the track, the rabbit crossed over and ran back towards us. It vanished in the long grass; the stoat carried on running towards us when it suddenly realised we were there. It reared up, looked at us in astonishment, and it was gone. The rabbit escaped.

An internet search afterwards taught us that stoats do chase rabbits, and that the tactic is to tire them out, whereupon they jump on the back and bite it through the neck to kill it. The big lump - 4 times the size of the stoat, is then dragged back, bit by bit, to the stoat's nest. Check it out on YouTube, there are several examples of what we saw.

We had never witnessed the like of it before, until at Manor Lane 2 days later, we saw part of the chase again! It must then be quite a common occurrence. Not enough to influence the rabbit population hereabouts, there are millions of them.

While working along the track, we come across remnants of toilet paper 'flushed' down the carriage toilets. 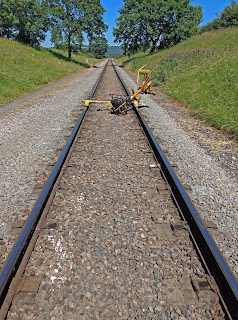 We don't really have an issue with that. The remnants soon disappear, see bottom left of this photograph. The wet toilet paper hits the ballast at speed and pretty much disintegrates. Paper is also a natural product, so it soon bio-degrades. 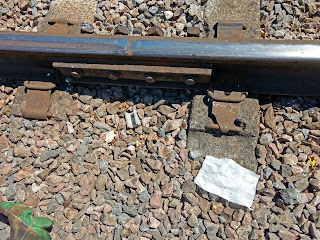 Not so wet wipes. These are the devil's own work, they are not bio-degradeable. We came across several instances where people had flushed these down the toilet. And here they remain, on the trackbed, for all to see. And for a very long time indeed too. The reason is that wet wipes are made of plastic. It doesn't say so on the packet, nothing on the packet gives you any idea of what a wet wipe is made of. It's an artificial fibre, one that lasts forever.

So please don't flush wet wipes down the toilet, not at home (where they cause the fat balls that we have seen in the press) and not on our railway either. They are indestructible. Better use a paper Kleenex tissue, if you must. They are not good at all for the environment, they are a 'single use plastic' and we would rather not find them on our track.

Rant over, a quick snapshot at Broadway. 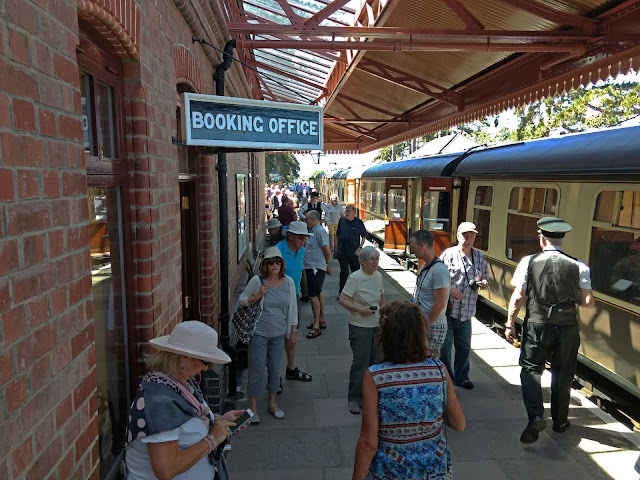 Here's a typical scene on the platform just after a Cheltenham train has come in. It was taken on Tuesday. Busy, isn't it? This is so good to see, it means cash for the railway, and we need a lot of it for the many infrastructure requirements that we face. 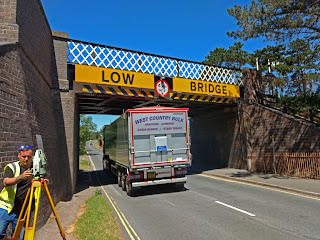 One of these is protection for our bridge. It was struck by someone once again a few days ago. First impressions are of a low speed impact, but what is so hard to understand about this giant sign we have put up? We are still getting them every 60 days on average, sign or no sign.

The good income generated by the opening of the Broadway extension is going to be spent, inter alia, on bridge protection beams here. We would rather spend this money on new loco messing facilities, or a carriage shed, or the completion of platform 2 at Broadway. But if someone gives our bridge a really hard whack, and they have done several times in the pass, we could end up with suspended services until the damage has been formally assessed. So bridge protection beams are an investment.

The good news is that the process for erecting the protective beams has started, and we see here a team surveying the area for that purpose. Meanwhile, another articulated lorry speeds on through.

We will resume progress on fishplate greasing next Monday, so do try to help. We are aiming for Toddington, and will get there, by hook or by crook.