There's non-stop fun on the PWay. Hardly had our little group returned from a look over the fence at the NYMR, than we were out along our own line, fishplate greasing. Just 4 of us volunteered for the sticky job on Monday, but we scraped by. 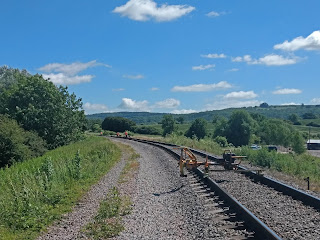 We set out from Toddington, after lugging and pushing two heavy TB2 machines from their place of storage some distance along the trackbed until we reached a crossing, where we lifted them on to their trolleys.

Here you can see the fishplate greasing group at work. In the far distance is the first TB2 undoing the bolts, in the middle a group of two prising reluctant fishplates apart and greasing them, and in the foreground is the second TB2, doing the bolts up again. 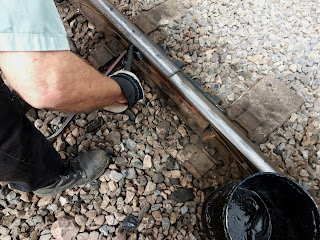 Just because you have loosened the bolts it does not mean that you can apply grease to the fishplates. Almost always they are stuck to the rails and need a good bang with the keying hammer, followed by some levering them open with a jemmy. 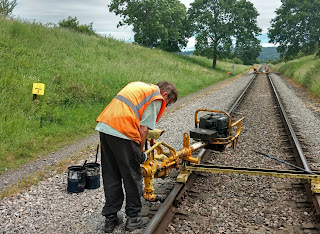 We did a good half mile of this, reaching the 11 1/4 mile post (from Honeybourne) here, followed by a picnic in the shade of the tree. We are half way up the 'Defford straight' here.

After the picnic, we went back down again, doing another half mile along the other running rail, until we got back to Winchcombe again. We will be back next Monday to carry on, volunteers permitting. Ideally we need at least 5 - the bolt tightener needs an extra boot to hold the head of the bolt in while the nut is tightened. Not too hard that, is it? 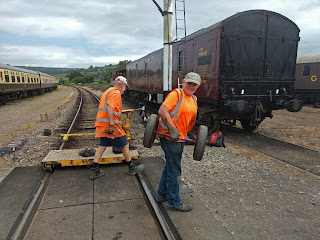 This sort of exercise is good for you, and Paul here has developed strong biceps thanks to his 'weights', in reality the temporary wheels of a TB2 machine.

Today, Wednesday, the normal and somewhat larger gang met. Our mission: ballast shovelling at Broadway (4 gangers) and at Winchcombe, removal and replacement of several fishplate bolts that had seized on Monday, thus preventing the greasing of the attached fishplate. It's never straightforward, this stuff! 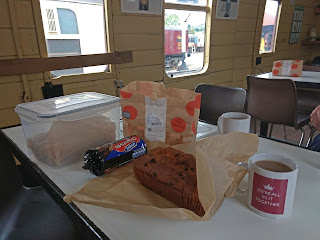 There was an 'embarras de richesses' in the mess coach this morning. Mrs. Dave, making bread, decided to slip a fruit cake into the oven while it was hot anyway. This had to be eaten, natch. Paul brought doughnuts, and just in case, there was a roll of chocolate biscuits as a backup. Which to chose, without causing offence? 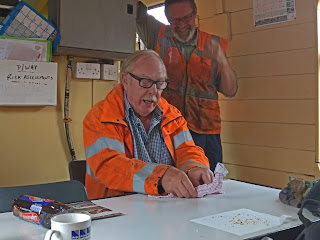 As we munched the cake, doughnuts and biscuits, John entertained us with a party trick involving a napkin. The subject was rather risque, so we won't go into what he was making appear any further. 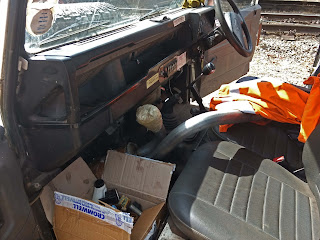 We loaded all the materials for cutting bolts into the Landie, then jumped into the passenger seat for the short drive up the line.

Whoa! No can do, there is a Landrover exhaust system in there already. What the.......? 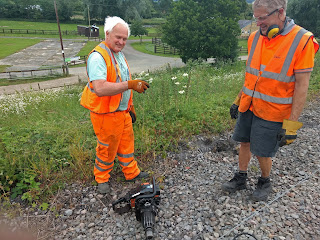 Once on site - the remains of Chicken Curve's chicken farm can be seen in the background - Peter pulled the starter cord on the 'animal' and it did not return. This, or the snapping of the cord, is a common occurrence. Back to base for a repair, and fetching an alternative one. 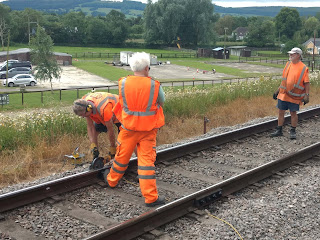 With the 'animal' now working, we were able to take the disk cutter and cut off the seized nuts. According to Clive, our expert on PWay matters, there has been a raft of seized nuts in one shipment of bolts. Possibly some issue with the steel involved? These here were put on just 5 years ago, during the repairs of the landslip here in 2012. 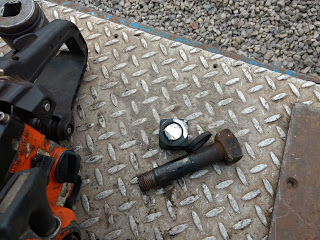 Here's a bolt with the nut cut off. Closer scrutiny of one showed a flat edge on a screw thread, instead of a sharp one. The thread seems to be destroying itself as the nut is removed, it may go half a turn and then locks solid. We had half a dozen of these to fix. 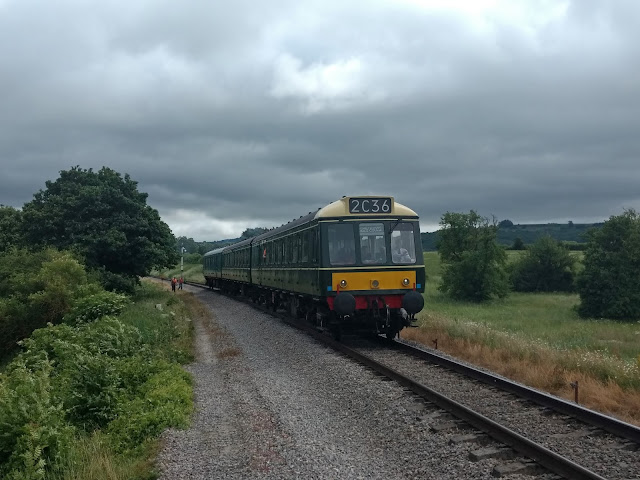 A brief pause in proceedings while the DMU from Broadway drifts by.

It was warm and muggy today, with a strong breeze too. The sky was dark and foreboding, as you can see in the picture. It is the longest day of the year too, bar one. 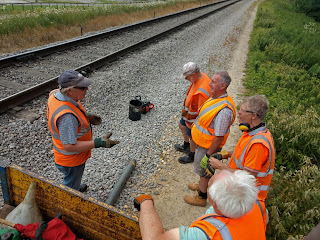 Working in the Winchcombe area during a two train service means that, having just crossed, both trains pass by in a matter of minutes. That's quite handy if you are working on the track.

While we wait for the second one, John regales us with one of his interminable shaggy dog stories. This is the one that ends with 'a multi storey carp ark' and a number of us have heard it before. More than once too. Probably the reason John B (top) is staring at his boots. 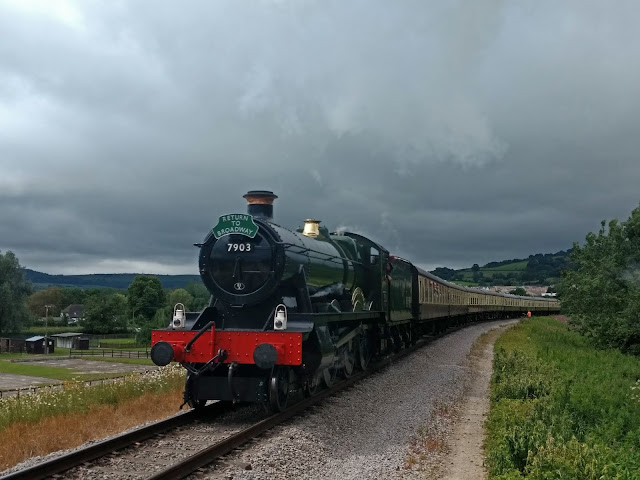 Here comes the other train, having just left Winchcombe and crossed the long and steep Chicken Curve embankment. What a sky behind it ! 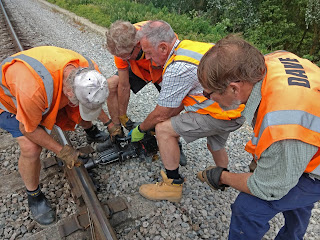 After lunch we came to do a final set of bolts, followed by rectification of two loose clips, all things we can cross off the track walker's faults list.
After a while of working the 'animal' it feels so heavy that people are very grateful for a bit of help relieving the weight. Paul gets a helping hand from Dave and John here. 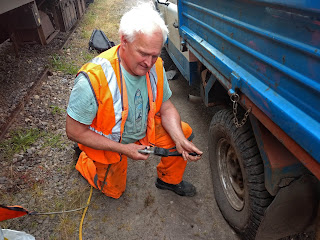 Back at the base we empty the Landie again, but find that the nearside rear tyre is very low.

Peter gave it a good lot of air from a compressor in one of the wagons.

While we were at it, we just checked the other side as well. That was OK. 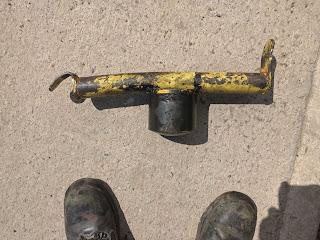 On Monday we noticed that this support for one of the TB2s has had a big konk somewhere along the line. We were mystified as to how this could happen, it must have been something really heavy. Not only is the end bracket bent right down, the pipe in the middle on which the TB2 rests is also bent. Some whack that must have been. 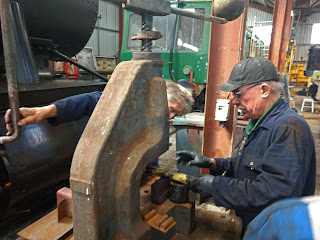 We took it to the loco department at Toddington, in the hope they might help us sort it out. And they did! It was straightened, not 'by Saturday if you could manage it' as we timidly asked, but right before our eyes. How's that for service. But they do have the kit, we must admit, it was done under this big press. Fishplate greasing can now proceed unimpeded next Monday, providing we can get enough volunteers. Can anyone else help us? It would be really helpful if we had an extra pair of boots on the ground than last time.

Out in the yard things were gearing up for a famous visitor. It seems he was born in Jacks Lane, Leeds. Confusion for the loco spotters though, he has no number... 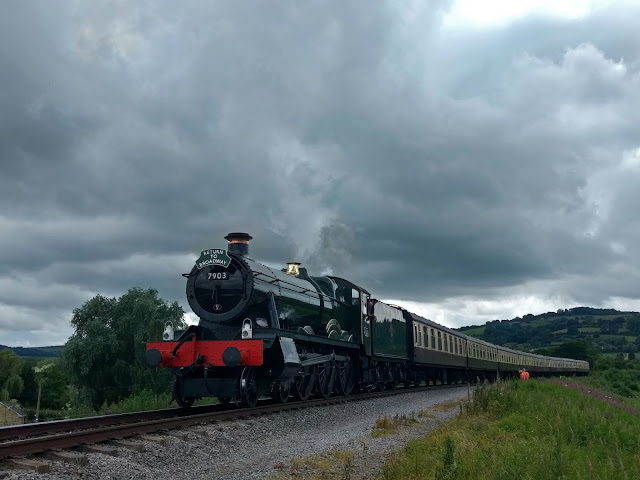 A last look at Foremarke Hall under that foreboding sky. Here she is just opening up as she leaves Chicken Curve with a full train.

If you have the time, why not take another look at the 'Early GWSR' Flickr site? Another 80 photographs of the 1980s have been added from John Lees' collection. And we're still only in 1986! There are a few more to come, and we will post them in batches after scanning and repair of blemishes arising after 30 years in storage. Those were the pioneering days...

John Lees joined in 1981 and has taken photographs of PWay work right from the beginning. With his private pilot's licence he also flew along the line twice, taking pictures from above. The latest batch just posted shows, inter alia, the pictures he took in 1984, during the second flight.