Sunshine at last! A larger than average number of volunteers - welcome back, the rain wimps - assembled in the mess coach at Toddington under a glorious sky. We found two cakes, oh joy! 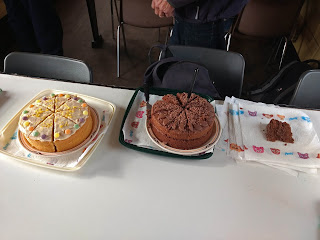 It was Dave P's birthday. Candles were absent, owing to the huge inferno they would have represented. Drawn by the sweet smell of cake, Stevie also made a brief apperarance to secure a slice, but we were not working together today, Stevie being elsewhere occupied on the railway. He was last seen under Stanway viaduct on fencing to keep the lambs at bay there. 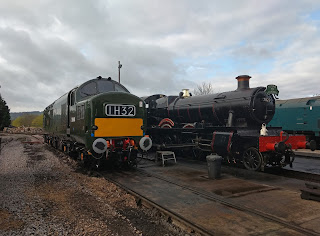 Outside, the Green Goddess made an appearance next to Dinmore, which was in steam ready for today's half steam, half railcar services. 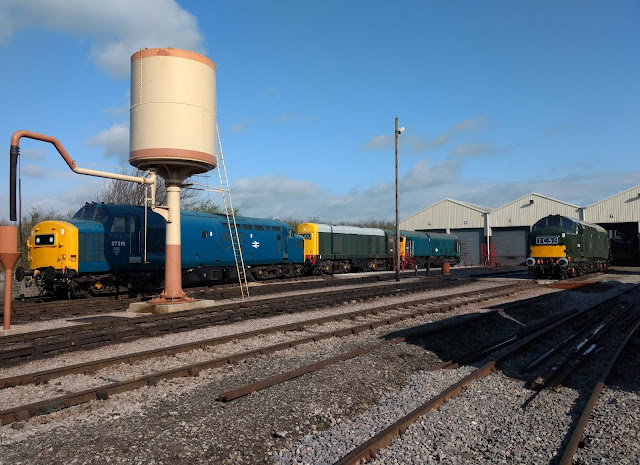 After Dinmore rumbled off to attach to the train, the yard took on a very modern appearance. Five diesel locos ruled the roost; there was even a sixth (the class 47) hidden behind the class 20. All magnificent pieces of machinery, we must admit.

We split into two teams. One went to Broadway to shovel ballast along the P2 road, and the other went to Winchcombe with two missions: sort out the large pile of cast iron chairs next to the running line, and if time allowed, recover the concrete sleepers exposed by the removal of a third party's rolling stock on the unconnected sidings by the yard gate. The latter job eventually had to be deferred to another day, as there were an awful lot of cast iron chairs to move.

Down to Winchcombe then, with a quick pause at Hayles Abbey halt. 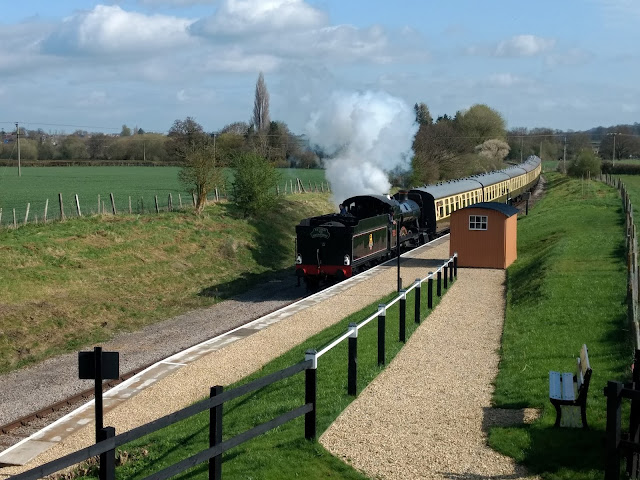 Dinmore trundled through, safety valve blowing off in the lovely morning light. We would have let you see a bit more of her, but the trigger finger camera decided to take the picture earlier than intended.
What an idyllic spot though. The halt is well kept, the grass is weed free and recently mown. The cutting has been flailed with the remote controlled machine and now looks like it did in steam days. 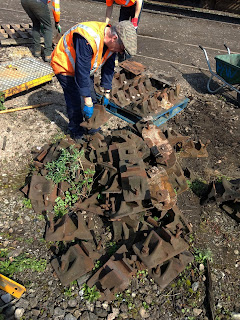 At Winchcombe we started to address the numerous piles. Mixed up all together were GWR type throughbolters, spiked base plates, S1 chairs and specialist chairs for pointwork. Most of them were for bullhead rail, which we now use only in stations, although there are still penty of them out there from the 1980s reconstruction of the line.

Many of the chairs had already been stacked on pallets but not then subsequently moved, so that the pallets rotted underneath the pile.

Here Paul is sorting through a pile, with throughbolters predominating. You can recognise them with their sticking out bolts, which are impossible to remove as the nuts are rusted on solid. They give you something to grab though. 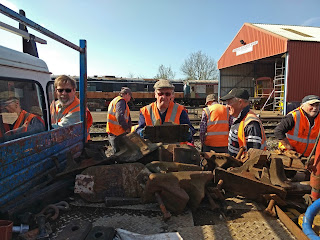 The chairs were removed to the back of the yard where they are out of the way. However, a goodly supply of GWR type throughbolters was taken up to Toddington for the 2807 group to turn into bootscrapers, which sell very steadily and provide them with a income for their favourite loco. They were heaved on to the back of our trusty Landie, while Dave kept a wary eye on the maximum weight allowed. 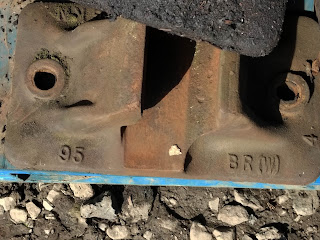 We have accumulated track components over 35 years from all sorts of sources from steelworks, an Army camp, a concrete plant etc so the inscriptions on the chairs make interesting reading.

This one is from the western region of BR, which decided to continue using the through bolts, whereas all the other regions were using chairs with 3 holes for chairscrews. 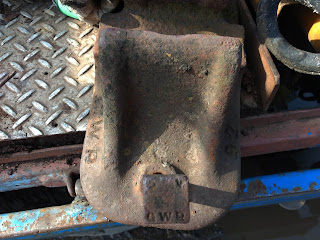 This is a very old one, marked GWR on the left and 92 (1892) on the right. The corners are distinctively rounded, which also points to its venerable age. Note how even the through bolt was marked GWR from above.

We suggested to the 2807 group that they charge a premium for GWR chairs, but they said that would complicate the pricing, so when you buy yours, you might be lucky with a genuine GWR veteran. Rumour has it that they will paint you a specific one in your preferred colour too. 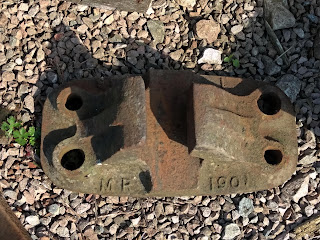 This one has two holes for bolts, and two for spikes. It's from the Midland Railway, and dates from 1901.

It could become your boot scraper too, we found 3 or 4 of them. 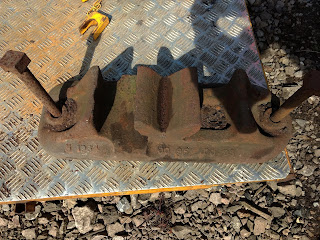 Finally, this one. A 'His and Hers' boot scraper? No more waiting while your partner cleans her boots. Through bolted as well, so of WR origin. 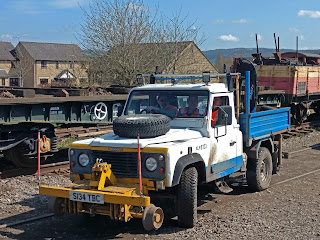 The Landie, well loaded with chairs for 2807, set off twice for Toddington, each time with a crew of three to help unload. It's a tight squeeze in there, but there are seatbelts for each of them, even if the occupants look somewhat apprehensive.

This scene reminded your blogger of a similar photograph he took in China: 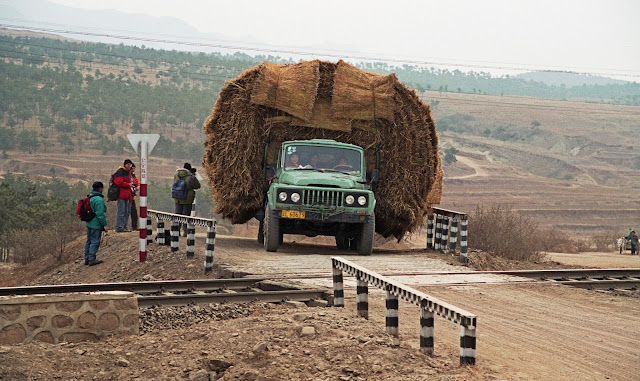 The same three apprehensive faces, as the truck is carefully manoeuvered over an open level crossing with its vast load.

Anything coming? Can't really see, there's a summit just round the corner. After all, what could come along here in the middle of nowhere?

This could come along here, and did, moments later: 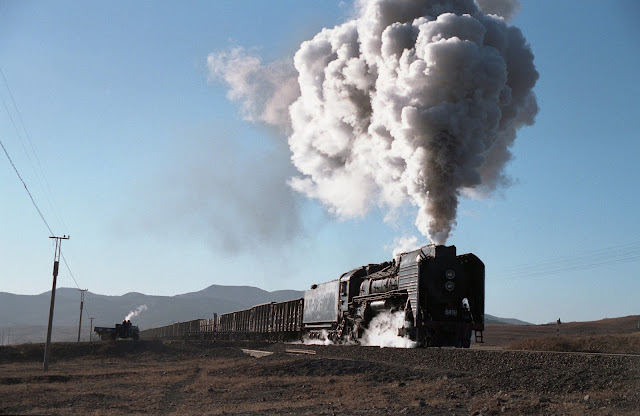 
Back to earth, in Winchcombe. We also had a train go by, it too was steam hauled, but no iron ore here (not since 1965 in fact): 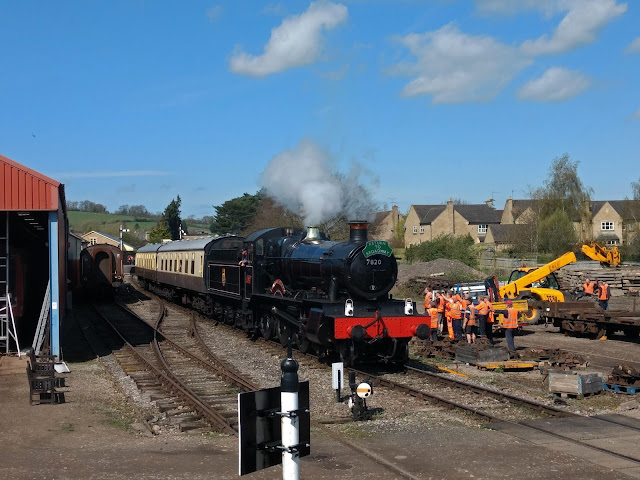 Dinmore takes the 11.20 train out of Winchcombe, as the chair hauling gang gladly pause for a moment to cheer it along with a wave.
You can see the motley collection of piles by the track. At the end of the day they were (almost) all gone. 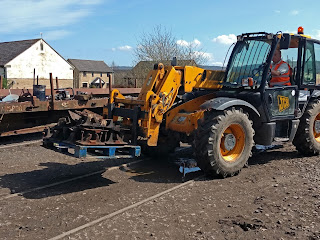 Once the chairs had been re-stacked on to more robust pallets, Martin moved them with the Telehandler up against the fence. 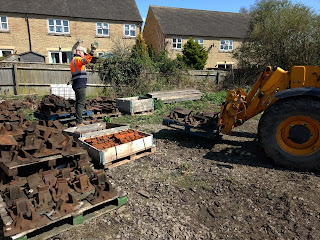 Here Julian received them, and arranged for them to be stacked neatly in rows for an easy pick up if so required at some time in the future. 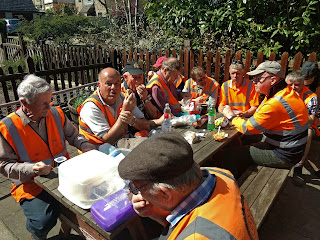 Lunch was held in Winchcombe behind the cafe, which was very busy. We had to wait before we could place our order for teas. And it was crowded out there in the sun - 13 people round a table for six.

Dave's two part birthday cake experience is still with us in the foreground, but was fully consumed by the end of the day. 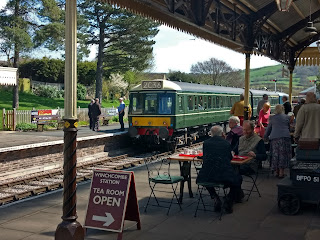 Winchcombe can be very atmospheric when trains cross here, as they do with a two train service. Here is the DMU out of CRC, waiting for Dinmore to draw in with the train from Broadway. All the cafe tables were taken. On the opposite platform sirens wailed as a bus load of schoool children was given a war time experience. 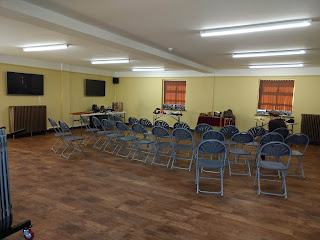 The visitor centre in use. It's very modern in there, but does hold a lot of children. 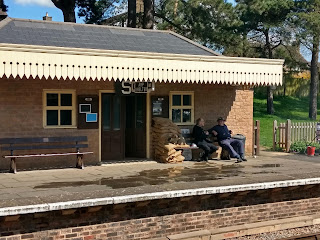 On the opposite platform two ARP wardens / firemen were passing the time between falling bombs with a chat. Squirts from a stirrup pump are left behind on the platform.

A further working session took place on Monday. Next to tidying up / removal of scrap and waste there is a small amout of building work still going on. 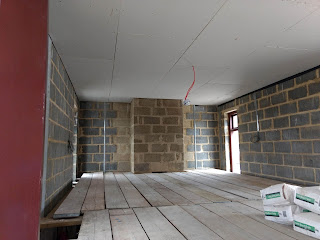 Both the kitchen and the cafe ceiling have now been fitted with plasterboards. This is a low cost activity - we have the plaster boards in stock, and the work was done by two volunteers.

Here the cafe ceiling has just been completed. This is a false floor, made of scaffolding for the volunteers to stand on while putting up the ceiling. The actual floor is a further 3ft down. The fireplace can be glimpsed at the end. A handful of generous donors have clubbed together and raised the funds for a new slate surround and grate, so funding for that is secure.

A professional plasterer will come on Thursday to fit plasterboard to the walls and then skim the boards with the plaster in the bags on the right. There is traditional wainscoting up to waist height. 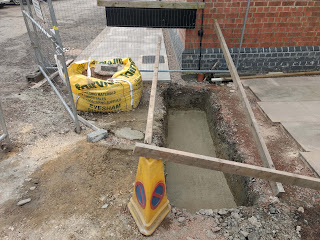 Outside, preparations are being made for the final length of spearhead fencing at the north end of the station building. There will be a single spearhead gate here and the foundation just cast here is for the gate and posts.