In with the new

Couldn't decide which way to turn today - Broadway extension, or winter works at Toddington? We decided to do both. And send a unit to Winchcombe. Luckily we had a good gang today, despite the freezing weather. We spotted one car up to its back door in a ditch along the road we travelled on, so we took it a bit more cautiously today. 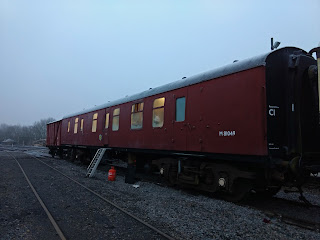 Our mess coach was found one road further along than last week, and covered in frost under a gloomy sky. Inside the lights were on, and there was a thick fugg in the air from the rudimentary heating as the gang assembled round a steaming teapot. 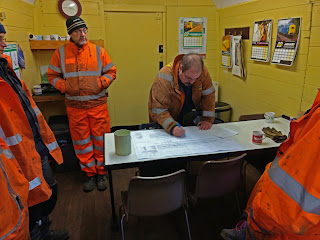 A big day it was today for us, as it marked the start of the non running season. We have a winter project at Toddington now, yet Broadway still has a lot of outstanding jobs. These have all been identified and of the three sub gangs we had today, one was to go to Broadway to start ticking off the list.

In the picture Nigel has a drawing of one of the points on the table and is explaining what we are going to do and what we need for  it. We hotly deny that the word PECO was rubbed off the drawing before we let you see it! 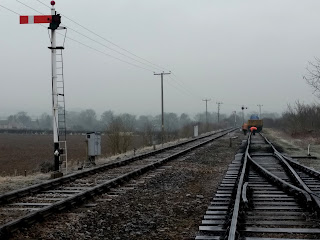 The second (small) sub gang set off for the Toddington south headshunt, where we are going to work during the non running season. The job was to measure up the site for the winter works, which will start next Saturday.

The third sub gang took the Landie to Winchcombe. Or rather tried to take the Landie to Winchcombe. It wouldn't start. Starting the Landie is an art, not a science. You can't learn it, you have to feel it. First of all you have to outwit the alarm system, which takes its job very seriously, both when you try to open the door, and again when you try to start it. Your blogger got over the first hurdle, and then over the second as well (the alarm on the starter) but nonetheless the old girl still wouldn't start. What now? Dave knew the answer.... the ignition barrel is a moody thing, and you have to 'feel' or twiddle it to get it to start. Ah. 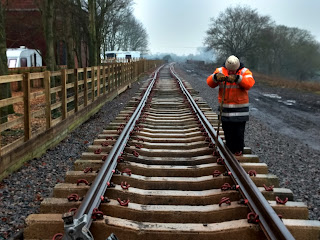 A private car took us to Broadway, while the Landie crew assisted the Winchcombe gang in clearing a bogie flat so that it can be used to load turnout components lying by the trackside at Laverton for use at the Toddington winter works.
At Broadway a minature gang of 2 - your photographer and lonely worker Pete here - set about (re-) clipping up the stretch of track by the good sshed, and later around the bridge as well. Many clips were missing, or had been kicked out again during the welding session on Wednesday. 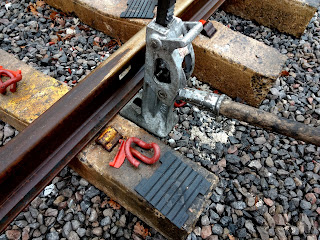 Another issue was missing pads left and right of the welds undertaken on Wednesday. Instructions on laying were to leave these out as the rail gets very hot, and also has to be moved about to get the ends parallel.

We dragged the heavy Duff jacks along several 100 yards and jacked up each weld just high enough to push a pad under, then pulled in the 8 clips right and left. Job done. 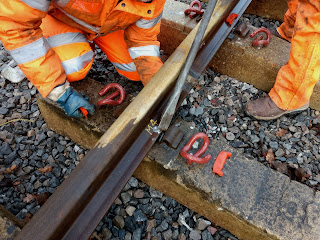 Mostly the pads were reluctant to play ball, and the answer was to persuade them a little using a crowbar.

Fingers under the 1 ton rail are not encouraged. You never know. We use something to poke with, whatever we can scrounge. 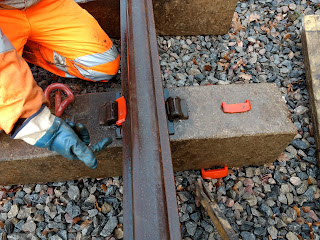 Here's a mystery photograph for you. Why won't the rail sit on the pad? Everything seems to be in place, yet it won't sit down and so clipping up is unusually hard work. Hmmmm.

Undo everything, get down on hands and knees, peer into the half inch space underneath. Aha ! A plastic clip has found its way exactly under the rail, invisible from above. Fiendish, but we have the measure of you. 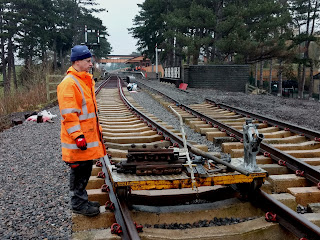 With the job at Winchcombe completed more people turned up a Broadway, this time with the intention of addressing a number of fish plate issues, such as fitting lifters where plain plates had been fitted to start with.
Man, machine and materials can be seen in the picture above. Take a bow, Leigh, he's our fishplate expert. Not many people can say that. 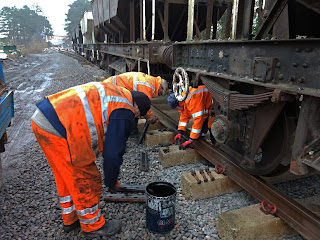 Now who parked that *&*+!$ train just here? It sits exactly on top of one of the fishplates that requires replacement. No worries for us, as there isn't a wheel actually on the joint, but it doesn't make life any easier when you have to crawl in underneath.

Ade enjoys slapping on the sticky grease from a large, sticky bucketful. Want any more grease? Sure?

End of the morning and a dash back to Toddy for tea and, no cake from Mrs. B but from a rival supplier. Yes, we confess, it was Aldi this time. But it was a rather delicious Panetone, which we ate heartily as it was full of air. Hardly any calories, see? 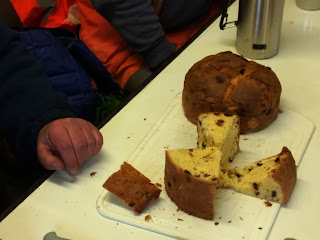 It turned out during the consumption of said Panetone that no fewer than 3 wives are after their husbands to lose some weight. Sadly that will have to happen at home. 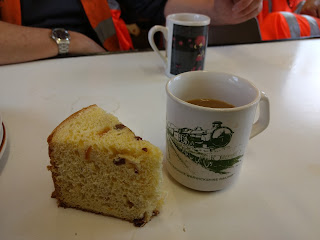 After all this is very difficult to resist, to finish off your salad or sandwiches. Go on, have another slice. Well...... 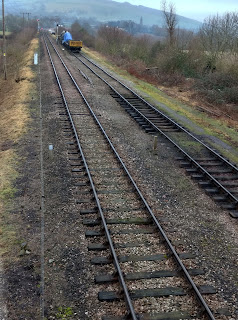 With a couple of minutes to spare after lunch, we were able to take this photograph of the future winter works site for you.

You're at the throat of the loco yard here, looking south towards Winchcombe. On the right is the access to the yard, in the distance the headshunt. It is not in itself connected to the main line on the left, so any loco that needs to go to Winchcombe from the yard has to reverse into Toddington station first.

Our job is to insert a direct connection to the main line here, in the form of a pair of turnouts, or crossover. We recently built one of these at Broadway north. Dismantling of the two lines here will start next Saturday. 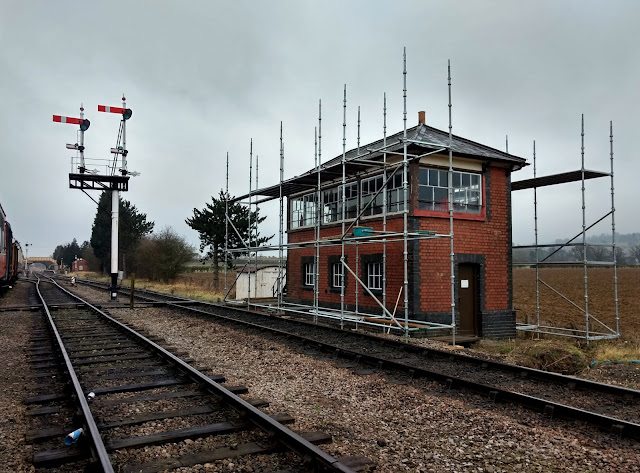 As part of the preparations the PWay gang inspected this new scaffolding around Toddington signal box. Would the train from Laverton with the turnout components be able to pass it? 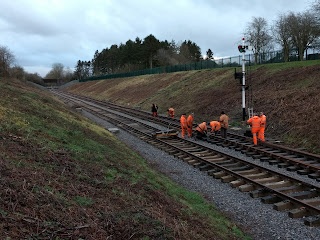 Back at Broadway after lunch and the fishplate gang was well advanced. From the goods shed we could hear the intermittent roar of the nut runner slowly recede into the distance, and the end of the day found them here by the northern inner home signal, where the fishplate set had to be exchanged for an insulated one. Job done as well. 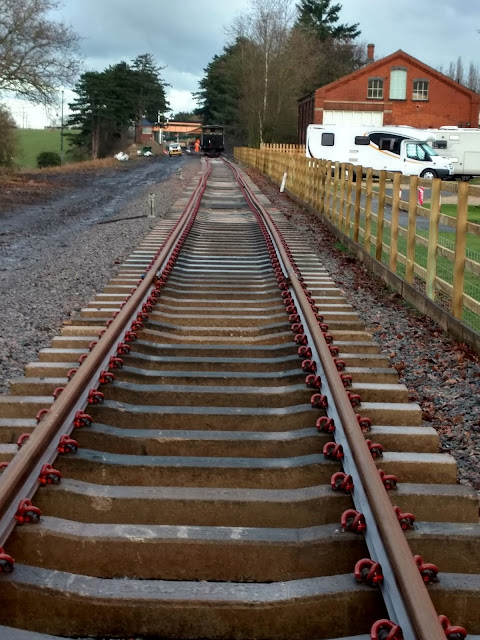 At the southern end of the site we were pleased to be able to say that we had fitted all the Pandrols and missing pads along this stretch by the goods shed. Another job done, we love the neat row of clips all the way up to the SHARK brake back there. Check out the continuing curve into the station here. Just needs a bit more tweaking.

Still to do: the area under the ballast train, and the remainder of the 'Clipathon' stretch at Peasebrook, where a considerable number of clips along almost a kilometre still need to be refitted after the stressing excercise.

You will recall that the snowfall put paid to our planned 'Mega Clipathon' and only a handful of volunteers were able to turn up on the alternative date two days later. We should be able to address this over several days over the next couple of weeks.