The answer may be all of them (just to cover our options). 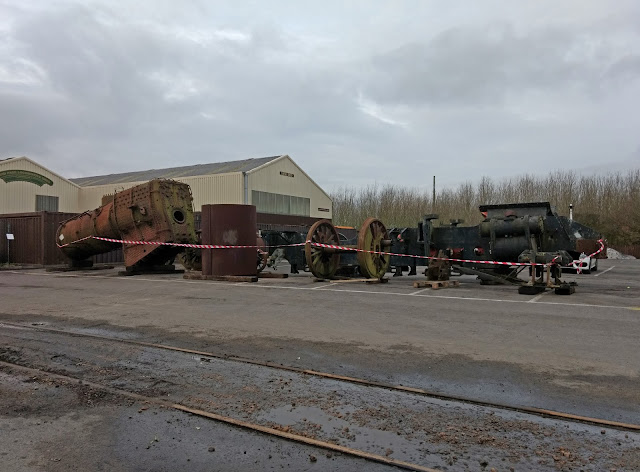 On arrival at Toddington today we were delighted to see the kit of 76077 laid out in the car park, no longer on the wagons on which they were stored up the north headshunt. A sign of things moving at last.

The jobs for the gang today were:

a. Start work on the winter job, i.e. the construction of two turnouts at Toddington south, and
b. Further work at Broadway on the list of outstandings to be ticked off there.

The Landie would bring round materials. 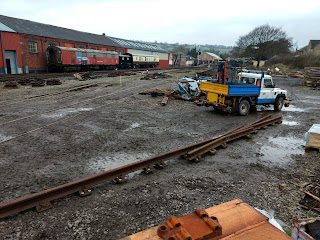 Off went the brave little Landie to Winchcombe, to find a supply of junction fishplates, some 'E' clips (smaller) for the barrow crossings and some blue (reverse) clips, where normal Pandrols don't fit, eg proximity to a fishplate.

In the foreground is a crossing for the first turnout at Toddington, which was later loaded on to a Warflat ready for transport there. 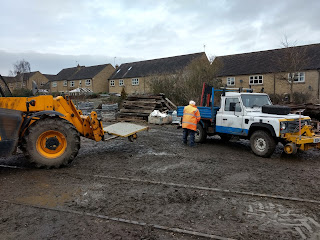 The Toddington gang requested that we bring a Permaquip trolley with us. We dug one out of the lineside grass, broke it into two halves, and got Alan to bring it to the Landie for loading. 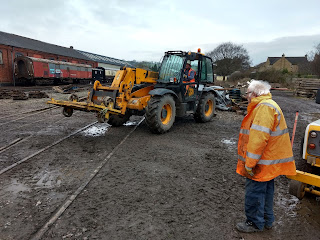 That didn't go so well - Landie too small, or Permaquip trolley too big. One of the two, anyway.

Option B was selected, which was to load both halves on to Alan's forks, so that he could drive up the trackbed to the site at Toddy south. How lucky we are to be a former double track line. 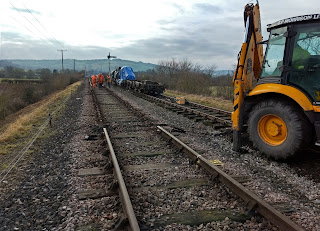 We took a socket for the nut runner at Toddington, and on handing it over found that the team there had already stripped the rails from the area where the turnout from the mainline to the yard is to be situated.
The headshunt on the right will have the second half of the new crossover, but is a bit low so will need to be raised, for which the wagons parked up there need to be moved. They carry, we ascertained, a class 37 engine, and another from a class 47. Big stuff, apparently an engine capacity of 220 Litres, as big as your garden rainwater butt. 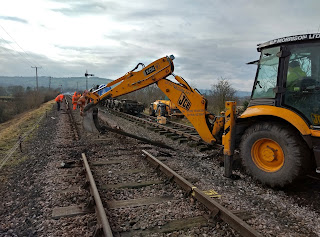 The sleepers from the plain line were then dug out by Steve, one by one. He later graded the area too, ready for the new timbers for the turnout. 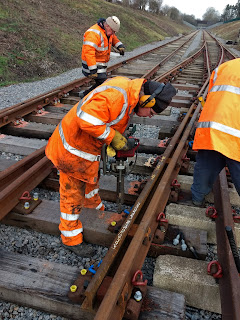 At Broadway, the gang was on the case already, ticking off the outstanding issues one by one. In the pictures they are drilling holes to screw down some base plates that were changed earlier. There was also more clipping up, finding the right clips that were not always available on the day the track was laid. 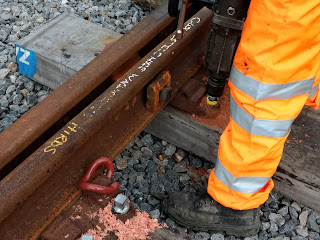 Another outstanding job was to finally bolt on the new check rails on the loop turnout north. To complete that job, we had to order a supply of these square spacers, and from the shavings there you can see that these base plates also had to be drilled and screwed down. 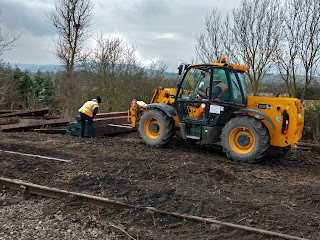 The two gangs met at Toddington for lunch, which gave the opportunity for a second look to see how far they had got at Toddington south, before returning to Broadway for the afternoon.
The plain line length had been completely stripped out, graded, and here Alan is getting a supply of timbers, which were being laid out to support the new turnout. 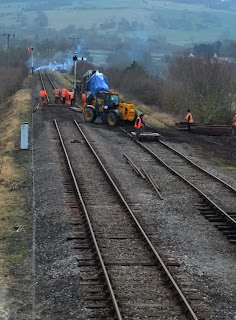 From above, you can get a good overview of the job in hand. The main line turnout will go in the gap just created, while the second turnout into the headshunt / yard access will go approximately where the trolley is parked on the right. 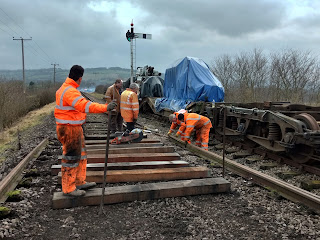 Here's how far they got just after lunch. This is the start of approximately 50 timbers, getting increasingly longer. 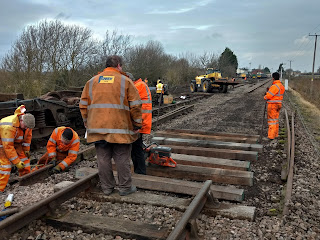 Lookijng north, you can see Alan in the Telehandler emerging from the storage area on the left, with the last of the plain timbers.

The longer ones were only recently delivered, and were still in the car park - they took rather longer to fetch, one by one. 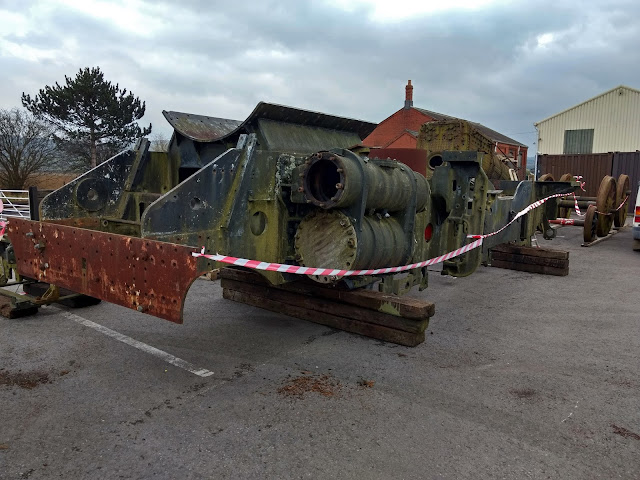 Speaking of the Toddington car park, here is the other side of the frames of 76077. They are being prepared for transport to a shotblaster's, after which they will go to Loughborough for reassembly (of the frames) 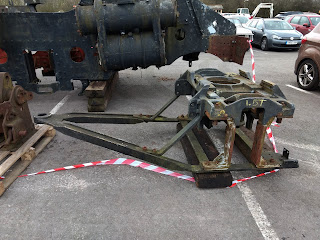 Each of the component parts was labelled with its weight. Very neat. This pony truck weighs a ton and a half - did you know that? You can see how it pivots around a pinion at the end on the left, helping to steer the locomotive through the curves. 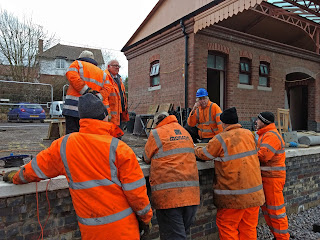 At Broadway the gang stopped to hear the rivetting (ah-hum) tale of how and where the canopy overhang will be constructed. It's Neal's brainchild. It will be supported by a further arched purlin, as visible in the building itself, top right. There will be a double row of glazing, and a sponsor has offered to pay for the big hexagon shaped lamp that lit the covered circulating area here. 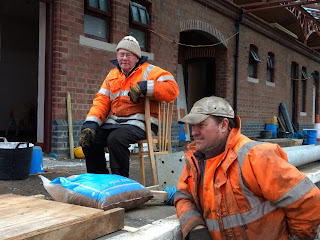 It really was a very riveting tale. Take a seat, why don't you?

Pete sits outside the gents' toilet, which has just received heritage style floor and wall tiles. 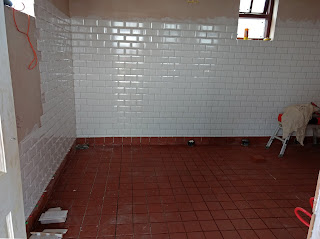 We had a peep inside - isn't this great? Red clay tiles on the floor, and white, brick shaped tiles on the walls. There will be 3 cubicles on the right at the back, 3 wash basins with legs at the front on the left, and three urinals immediately on the right. 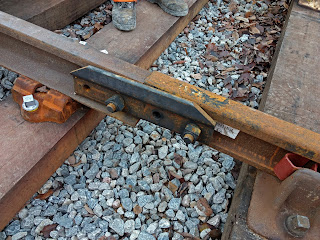 Then it was a diet of fishplates, one after another.

This one here's a temporary one. It's a complicated situation - a junction from worn flat bottomed rail on the left to new bullhead rail on the right, with different rates of wear, so the fishplates also have to achieve a lift from the worn one to the new one. 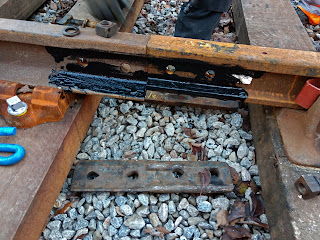 It's this junction plate that the Landie went to fetch from Winchcombe.

A junction place from old technology (bullhead) to new (flat bottomed) is quite common, but one from used modern FB to new old fashioned bullhead is never seen - rare as rocking horse droppings in fact, we were told. 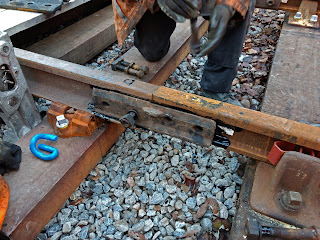 The rare junction plate goes on.

The sad end of the story was though that the lift achieved by the fishplate was slightly too much, so it all had to come appart again, and the temporary plate was put back on. 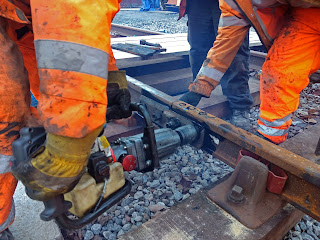 But the one on the other side was a perfect fit, so at least that's that job ticked off. 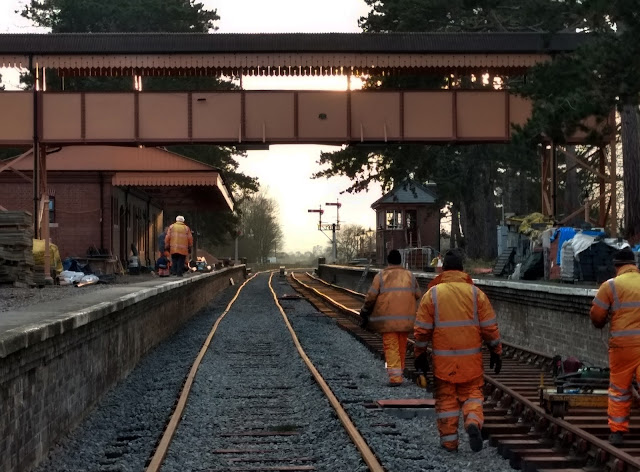 The afternoons are getting longer now, so there was still a remnant of sun in the sky as the gang loaded up the tools on to the trolley and took it to the far end of the station for the next job. The rays of the sun reflected off the tops of the rails, and you could see the curve through the station, with still a bit of a kink at the far side of the bridge on the down line. The ballast train has been removed, and may well come out again, reloaded, later next week. 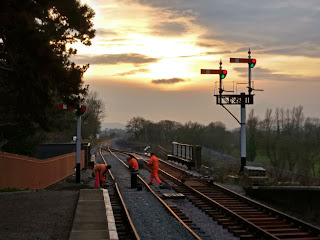 The last job for today was by the southern barrow crossing, which was quickly finished off.

To close, a happy new year from the Extension Blog to all our readers. May your year be as exciting as ours will be ! 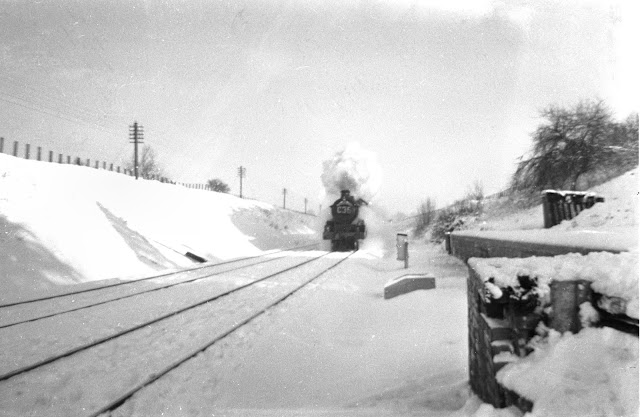 Our new year's wishes are conveyed by this splendid shot by local photographer Brian Parsons, who caught the Cornishman thundering past the Broadway horse dock siding - then already lifted and the crossover taken out - on a snowy new year's day at the end of 1962. The winter of 1963 was in full session, but it did not stop the railway. We were tougher then. Snow or no snow, we're going to Penzance !