The Wednesday gang split into three today, with a long list of tasks.

Team 1: Went to CRC, to address a number of back maintenance issues that we haven't been doing, owing to an extension being built. We're on the case now though.
Team 2: Went to Broadway, finished off the two buffer stops (drilling the sleepers and tightening down chair screws), and then went to Winchcombe to ascertain what sort of bullhead paraphenalia we have, bearing in mind what we need to lay in between the platforms at Broadway.
Team 3: Was sent to Peasebrook to recover  'about a dozen' random sleepers left in the undergrowth. The extension team has swept past here, and left these in their wake. We need to tidy up the lineside, and also see if any can be recovered.


First job of the day though was to test the doughnuts, graciously supplied by Paul.

Jules, Paul and Dave muse over whether Tesco's are as good as Asda's. What d'yer reckon? 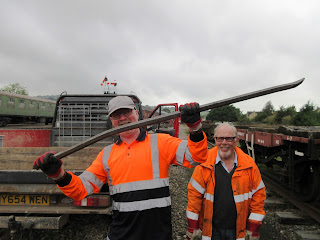 Then it's off to Winchcombe to fetch some tools for No.3 gang, the sleepers stackers.

We need some bars.

Jules has just come back from a sporty sailing holiday. Whoa there, cowboy, you're stronger now than you think. Spare a thought for the tools, old chap. 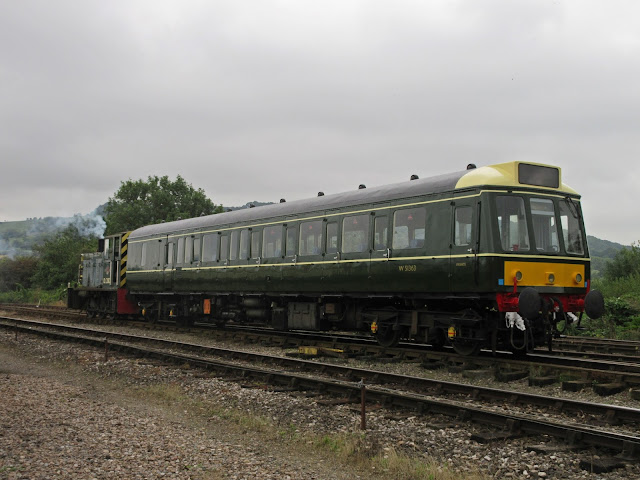 A sight for sore eyes is the latest outshopping from our craftsmen in the C&W paintshop. It's even got its own little steam engine to pull it along (that's right, isn't it?).
The gurus say it's W51363, a Class 117 Driving Motor Brake Second. Doesn't it look splendid! 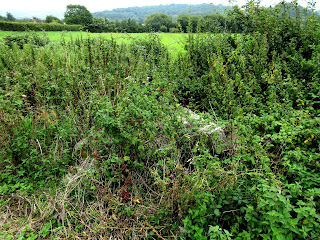 Then it's off to Peasebrook to find the reported 'dozen or so' sleepers hidden in the brambles.

Here they are - see them? We found you. 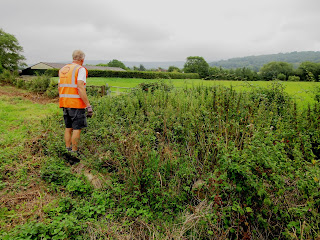 We had to develop our plot carefully, as the brambles were treacherous and hid many nasty traps.

Here Dave is looking a a pile of rail off cuts. See them? Thought not.

Adjacent was a huge roll of stock fencing, threaded through with bramble and loose wire. We took that off to the pile of redundant fencing, also nearby. 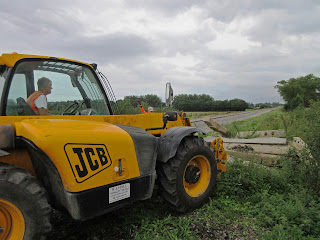 Then Dave took a dive at the pile, and managed to retrieve 5 in one go, but all jumbled up. 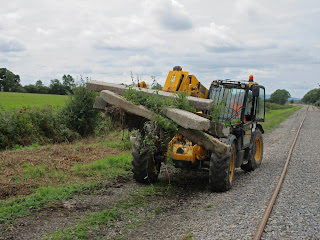 Here is Peter with a similar retrieval, plus a bonus of prickly brambles and an extra helping of wire wrapped round two of the sleepers. 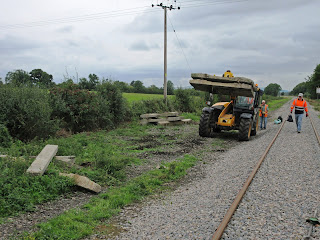 We made two stacks on site, one of SHC sleepers, and one of Pandrols. Most of the latter had broken clips in them, which will need knocking out.

Once we had 8 SHC sleepers ready, Dave picked them up and took them to Childswickham half a mile away. As it was quite a long way away, and involved an awkward crossing of the line (the new vehicle crossing still needs more ballast to build up the approaches) he did just the one trip, but did manage to bring back more bearers, which we needed ugently. 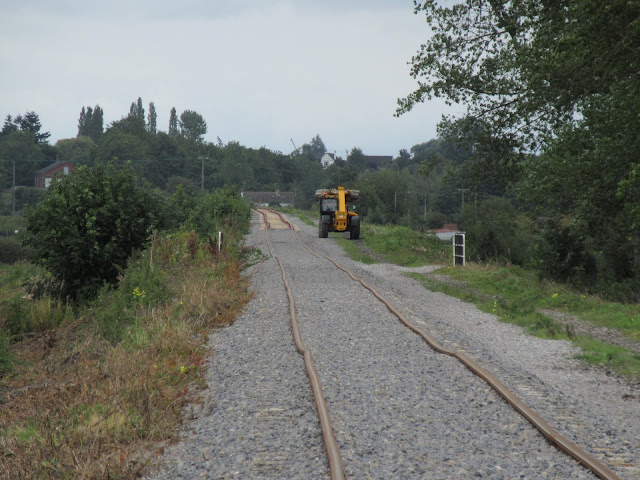 Here is Dave with his cargo of 8 sleepers, carefully driving along the trackbed towards Broadway. The ballast in the foreground has been dropped in the next section that will be tamped and stressed, but we haven't finished the drops yet. Nor tamped it (as we hope you realise). 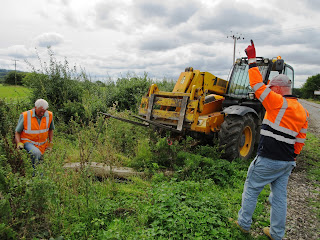 We found rather more sleepers, deep in the undergrowth, than we expected. We guessed the stacking would take two hours; then we could join the gang at Winchcombe, but in fact we were here until mid afternoon, after finding this second pile.

As it was all jumbled up, we had to pull the sleepers out one by one, which was rather slower than with the other pile in the morning. 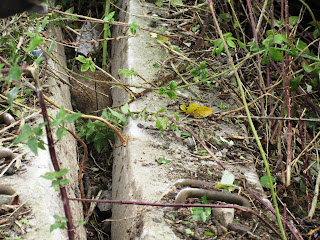 A surprise discovery in the middle of the jumble was this rabbit, the brown ball centre left.

We thought it was stuck under a sleeper, but when we pulled the next one out it started to move, got bowled over upside down by the sleeper, recovered and eventually hopped off into the brambles unharmed. They are tough little creatures. 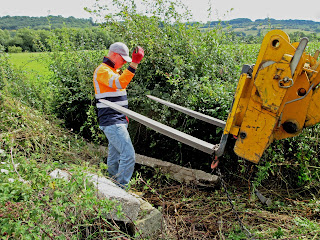 Here is Jules directing Dave into the deepest part of the brambles, to hook up one that was upside down. Dave stayed safely on board the Telehandler, as he was in shorts today and scratched his legs immediately on arrival. Ouch! Lesson learned. 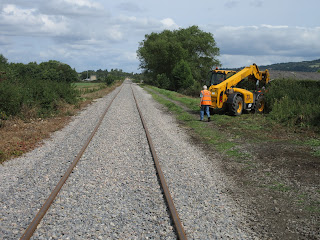 Mid afternoon the Peasebrook Farm site was pretty much cleared. The track laid here seems to stretch into an interminable distance. What a lot of work we have done here.

Still on site in the jungle now are a pile of 8ft rails, and a huge knot of redundant fencing material. 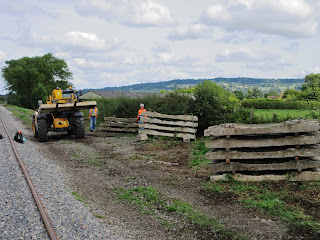 The last shot of the day shows the recovery job completed, including two found further up the line, beyond the farm bridge. There are three stacks now and with the 8 taken to Childswickham, we located and stacked not twelve but fiftyfour sleepers. They are mostly of second quality, but many of the Pandrol ones have good structure and just need the clip ends removing. 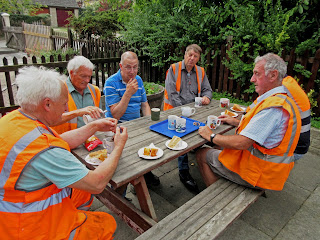 At the end of the afternoon we took the tools and Telehandler back to Winchcombe, and decided to treat ourselves to tea and cakes in the Coffeepot.

This idea was enthusiastically adopted by the rest of the gang at Winchcombe, so here we are with well deserved cups of tea, and selections of raspberry sponge or coffee and walnut cake. What a great way to end the day. 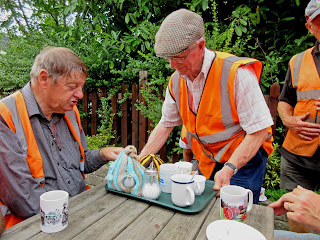 By the time Clive arrived with the reinforcements, Rick (top right) had already eaten his fill and looked to be quite full. 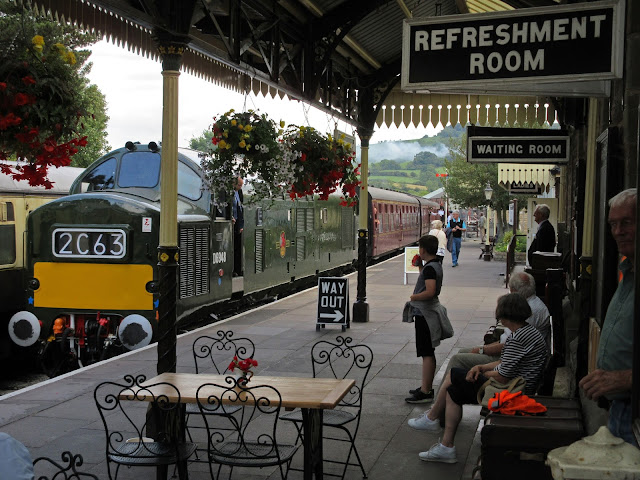 Winchcombe is always a magical place, as trains cross here and it can look very busy. There is no better place to enjoy this than seated under the canopy outside the Coffepot cafe. We hope this scene can be repeated at Broadway soon, but the cafe there needs a name. Something related to the Honeybourne line. We've got the Coffepot, what else could we call it? 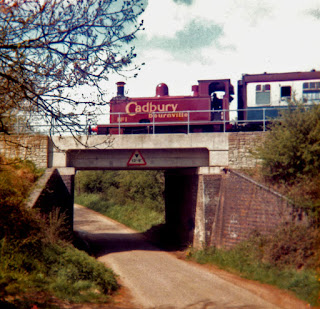 The picture above shows Cadbury No.1, the railway's first working steam loco, at the end of the initial 700 yard run on Didbrook No.2 bridge (the one repaired by BR). Note that the coach is still in BR blue and grey, so this would be an early picture, probably from the spring of 1984. Services started on 22nd April that year, now 34 years ago.

If you've got pictures of the very earliest days of the society, we'd be interested to hear. People thought that, with the bare trackbed and demolished stations, we'd never do it, but we did ! Heroic days, those. It just goes to show, aim high and don't give up.