A number of notable absences from the team today, as the effects of the summer holidays began to bite. They didn't really affect our progress though. That said, it was decided, rashly in the opinion of the tea drinkers, to skip the tea at Toddington and go straight to the site at Broadway. 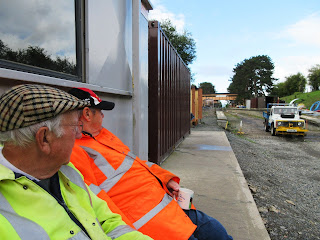 Feeling a little dry, and while waiting for the rest of the gang to arrive, three of us availed ourselves of a cheeky cuppa in the Broadway mess room. They have it nice there...chairs, a patio, watch the world go by. Here comes the Landie though. 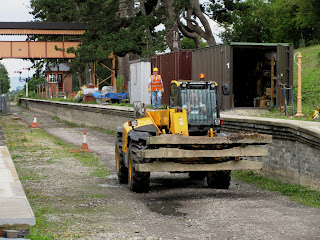 We got the tools out, and shortly afterwards the Telehandler arrived with the first load of sleepers, taken off the Warflat - loaded on Monday - at Childswickham. It's a tricky drive down the single trackbed that is available for us, just hit the fence once (sorry about that). 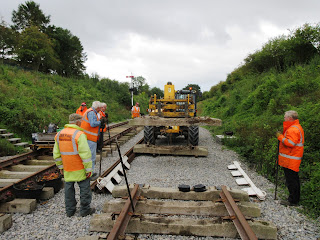 The first load was dropped off at the end of the Malvern side siding, which we then started to extend further southwards, in the direction of the platforms. 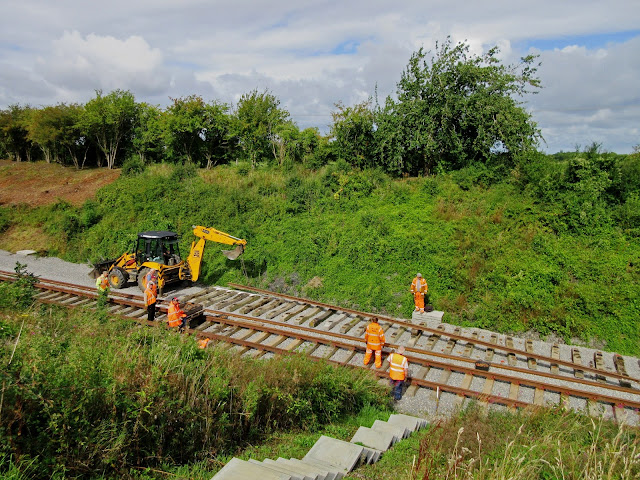 Once we had laid down 26 sleepers, Stevie came down from Childswickham (where he had been sorting sleepers) to lift in the first rail of the day. This shot shows the depth of the cutting north of Broadway, which was used as a quarry in 1903 to get material for the goods shed embankment and mainline down to Peasebrook. 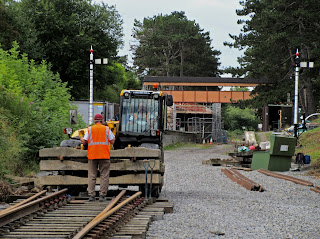 Nigel then brought another 12 second class sleepers for the siding, where 120 were left to lay to get to the end of the plain track.

Here they are being stacked temporarily at the end of the northern turnout, from where they are brought to the rail head in smaller batches. 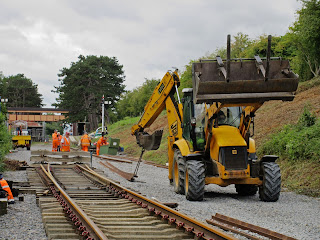 Just before we lift in the rails, Steve comes and drags down the next pair.

You can see us here getting increasingly close to the northern turnout, on the left. 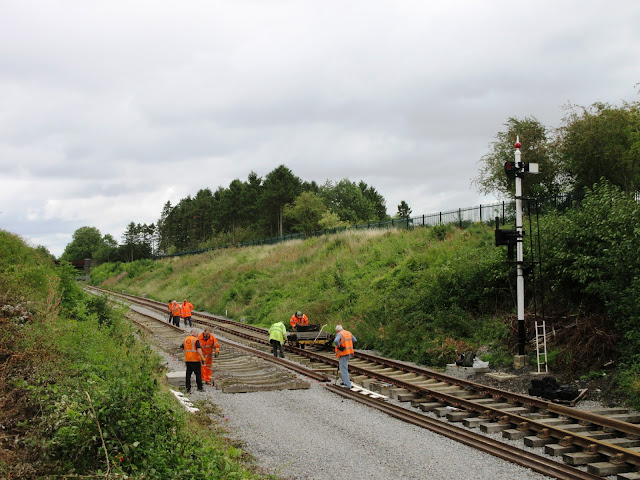 This picture shows the second length being prepared today. The double track seems to extend into the distance, all the way to Stratford, the way it used to...
We are now so close to the station that it is possible to climb the embankment for a photograph like this, thanks to recent bramble clearance by a member of BAG. On the right is the new inner home signal, with its route indicator attached. 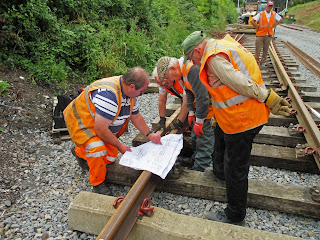 As we approach the turnout with the siding, thoughts turn to the layout of the track at this point. Just how long is this siding anyway? Where does the turnout for the siding start, how much more track do we need here?

Nigel and a number of gang members consult the drawing for the northern turnout, to see where we are. 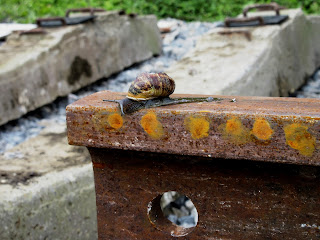 Another one watching was Speedy the snail, now getting a little concerned about the banging around the rail end, which was his home until this morning. Where to go?

Speedy eventually jumped off the end (if a snail can do this) and vanished under a sleeper, which hopefully will offer him a new home. 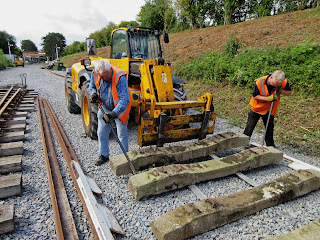 We continued laying in the sleepers. It's quite hard work as we are unable to use the spreader bars and the JCB to drop them in. Instead they have to be manhandled into position with bars, first roughly off the wobbly forks, and then more carefully into their exact positions, left or right, forwards or backwards. 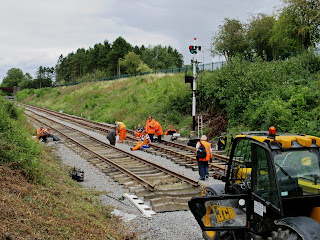 By lunch time we had passed the signal post, and we felt we deserved a rest. The weather was dry and pleasant, so we sat outside on the track and ate our salads. 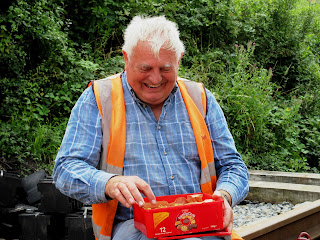 Shortly afterwards the cakes were made available. This coffee and walnut one had been eagerly awaited by Neil, and there it was! Yes! 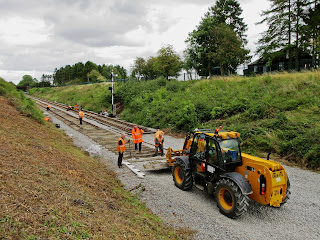 After lunch, we lengthened the siding some more, and it now started to overtake the mainline headshunt. Tail wagging the dog here!

The Telehandler brings in another load of sleepers, making 26 and time for another pair of rails to be laid in. 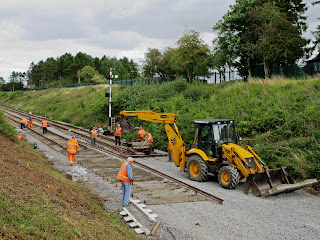 As the siding was now longer than the main line head shunt, Steve was able to position himself alongside, which made lifting in the rails a lot easier. This was the last panel constructed today, four in total. From here on the track in the foreground meets the turnout from the loop to the siding. 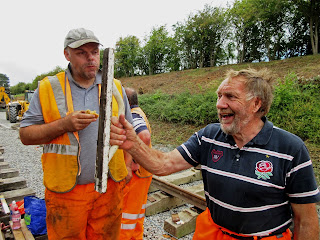 Our white spacer board is having a hard time. It was made specially for us, and has been in constant use throughout the extension. Today the grab handle fell off, a sad reminder of its deterioration. The question is, will the remains last to the end of the extension track laying?

At least Steve L will now be able to use the handle for his plastering jobs at home. Just like this. 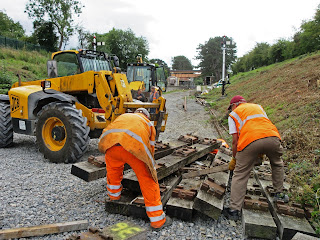 Having completed the siding, our attentions were turned back towards the northern main line turnout, which we had left well started, up to sleeper no. 26.

Now, where is no. 27?  Naturally, it is always at the back, or on the bottom of the pile. To boot, we were also short of bars today (where are they all, they're not in the site safe?) and you can see Ivor here trying to lever one timber off another using just a bearer from stacking. 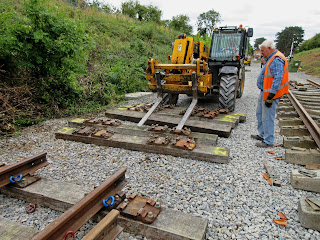 Batches of 4 timbers were laid out in the right order further up the trackbed, and then brought down and dropped off roughly into position. 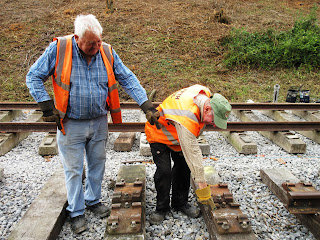 Their precise position is critical, as they have two tracks that gradually diverge, and you can't get the rail in if the angle of the chairs does not fit underneath.

Here Neil shows Pete where to point... put your finger just here. It takes skill to know that, not everyone has it. 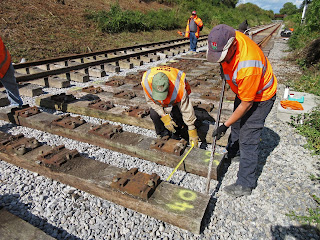 After consulting the diagram, each sleeper was precisely positioned in relation to its neighbour.

In the picture we are up to no.40 already, but there are plenty more to come. The timbers get longer and longer (centre left) until they gradually interlace with those of the adjoining track. We haven't quite got there yet though. 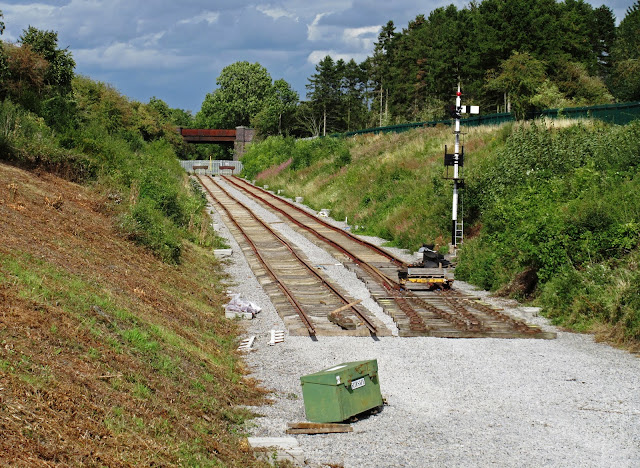 You can see on this closing picture that the timbers are just about to do this (centre). The turnout on the right is main line to loop, and the one that will go in by the site safe is loop to siding. The two turnouts will meet in the centre; the whole thing is known as a crossover on double track. 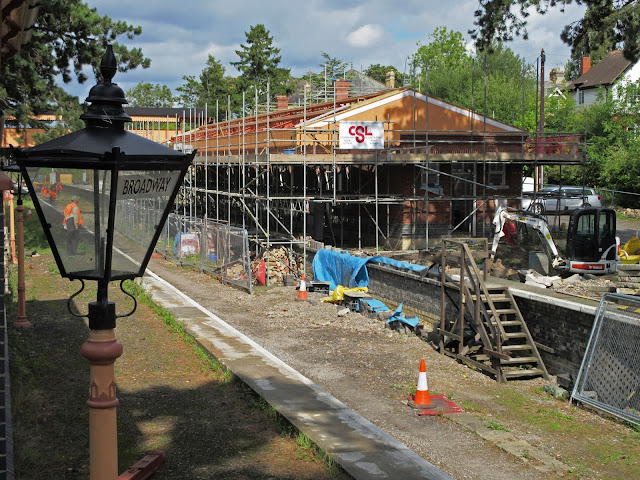 With today's fine weather, the Broadway gang made good progress, as you can see from this photograph taken from just south of the signal box.
In the centre the first row of engineering brick corbelling has been laid on the platform closure. The wall is now too high to just step over, hence the steps on the right.

The canopy sees work almost every day now, and the woodwork on it is coming on in leaps and bounds. The white lines on the canopy end represent the start of the typical chunky moulding that the GWR canopy has here. It will have a second moulding fitted on top of it, and finally an angled piece to support a short overhang in the corrugated sheeting on top. 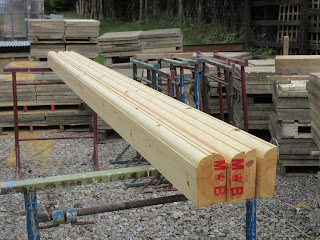 This is the chunky second moulding that will go on top of the white strips in the last picture. 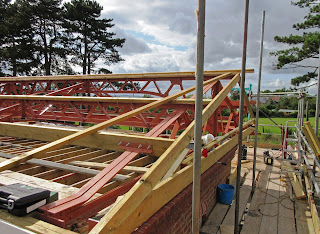 At the northern end, the second canopy end framework is being constructed.

This framework is almost identical to the first, but will be removable in order to add on the canopy overhang to the footsteps that belongs here. When we can afford it.

The diagonal length of wood was used to check that the wooden supports fitted to hold the sheeting are properly in line. And they are.

A veteran Broadway member Terry has made available some old colour prints of the first days at Toddington. We'd like to share these with you, but we're not too sure who is on them. Can anybody say more, or provide some reminicences? 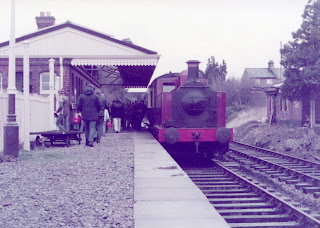 This shot was taken in February 1984 at Toddington.

The platform 2 waiting room is still derelict. Platform 1 has been rebuilt.

There's a Midland lamp post on the platform; it's not there any more today! 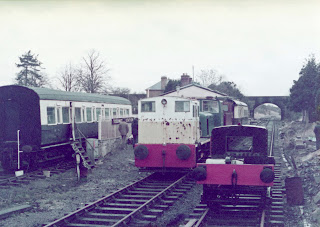 Also taken at Toddington in February 1984, this shot shows the same short train in the background, with other industrial stock in the foreground, none of which is on the railway today. In those days you took what you could.

The steps to the carriage on the left are marked 'Autocoach'. Where is that today? 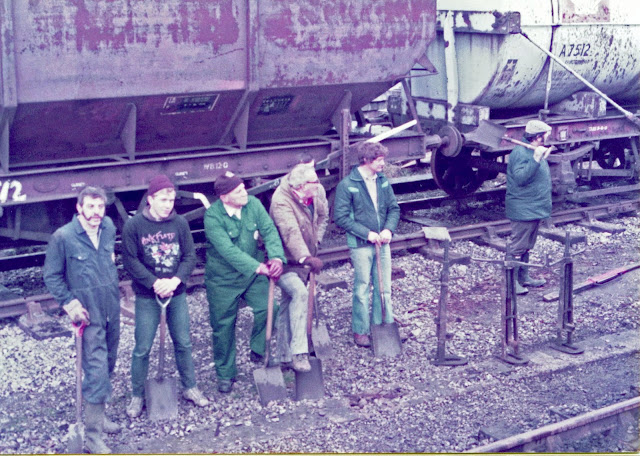 All we know about this one is that it was taken in February 1984. It's thanks to these guys that we are running trains at Toddington today, but can anyone identify them? 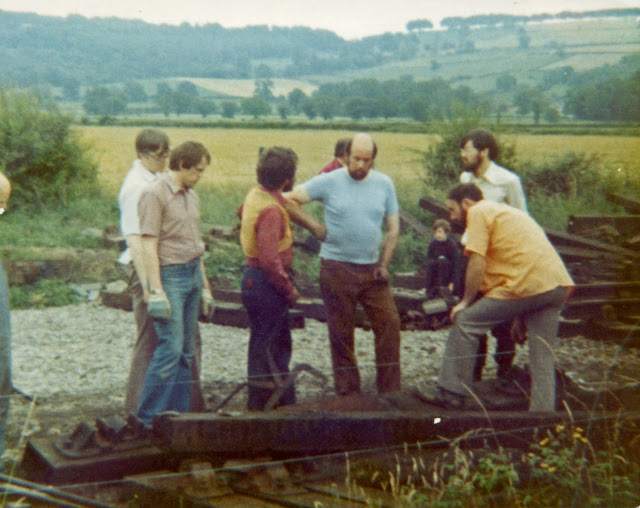 If you are old enough maybe you recognise this crew? They were snapped by Terry in 1981, right at the beginning of the GWSR revival of the Honeybourne line. Note that there is no track at all in this picture, which was nonetheless taken at Toddington. 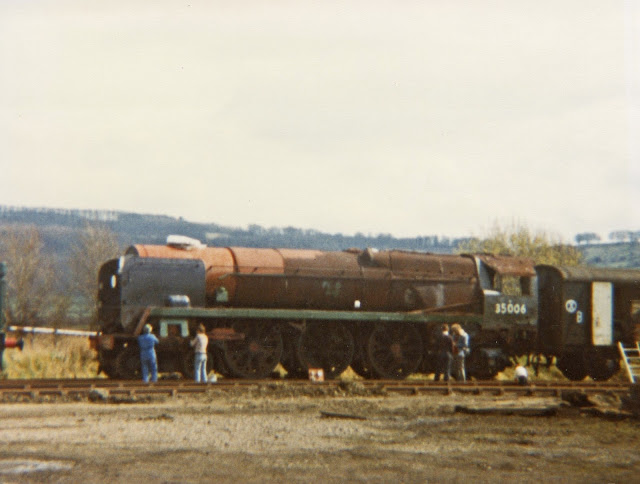 And what about this Barry wreck! Recognise it? Now that P&O is up and running, it is easy to forget the enormity of the project taken on by its owning group. It didn't even have a tender, but it certainly does now. It just makes you appreciate what they have achieved.

If you also have some old photographs you want to share, you can send them to breva2011 (at) hotmail.co.uk.  Once we have some captions for them, they will go on to the Flickr site here:
https://www.flickr.com/photos/73536293@N02/sets/
which includes a section on old GWSR photographs.