A gang of 12 was on three jobs today:

- Sleeper stacking at Gotherington. The lovely pile we made there earlier has gone! Someone loaded it on to a train and took it away, so we have to start all over again.
- Laying out the materials for clipping up after stressing, along the second 1000m to be stressed at Little Buckland.
- Making two ballast drops on the northern half of the second 1000m to be stressed.

But first things first: the next lot of new rail has arrived! 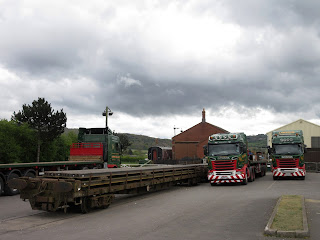 Three lorry loads arrived on Monday, and at the end of the day +/- 48 rails had been loaded on to the two bogie flats. This would give over 400 yards of new track when all is laid.

Complicated manoeuverings then ensued, which involved the fully loaded ballast train (with extension ballast) heading south, away from the extension! At the time on Monday there was a sleeper train being loaded at Gotherington, and the manoeuvre was required to bring the ballast wagons ato the rear of this extension train. The rails are now at the front, and the sleepers in the middle. Did you get all that? 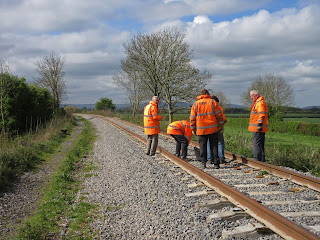 Three of us set off for Gotherington Skew Bridge, pausing at Winchcombe to pick up the Telehandler. As we can stack about a hundred sleepers in a day, it takes at least three days of stacking to get a supply for a trainload. 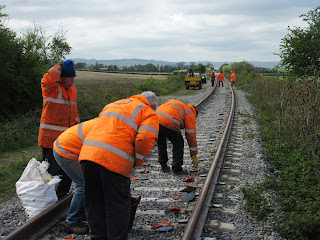 The other 9 repaired to Little Buckland. Here we completed laying out the plastics and steel clips for the first 500m of the next rail to be stressed.

Plastics, pads, clips, John is scratching his head over what to do next.... choices, choices. 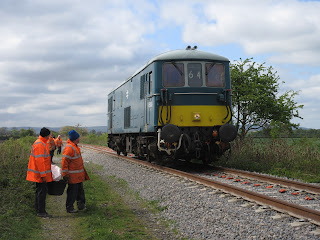 In our portfolio we already had the availability of a full ballast train. The loaded wagons were at Peasebrook, the loco at Toddington. How to get one to the other, while there were train loads of passengers running? The answer was to get the class 73 out on the extension early, then quickly bring back the staff to Toddington for the DMU to do its regular run to Laverton.

Here the loco for the ballast train is passing the gang laying out the plastics at Little Buckland curve. 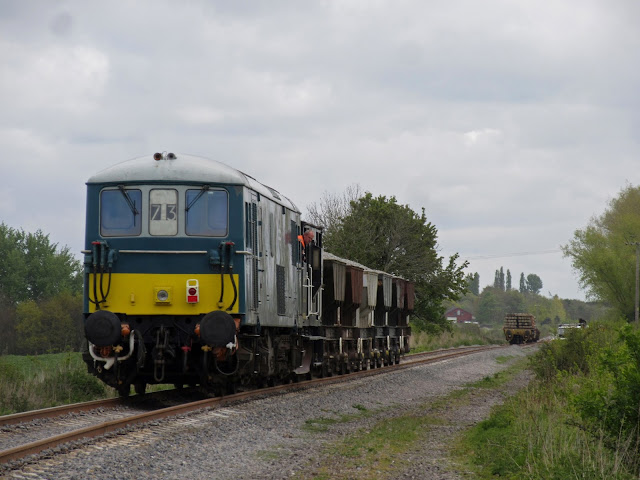 A few minutes clater, the class 73 was back, now heading south again with the 6 Dogfish in tow. The desired point of discharge was just north of the bridge, on the second half of the next length to be stressed. 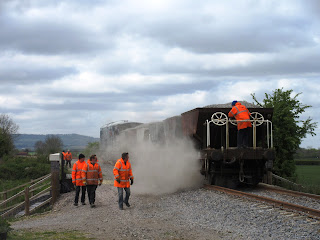 John opens the centre doors, as the train starts to reverse back north. A huge cloud of dust emerges from underneath the wagon, the result of the many dry days we have been having. 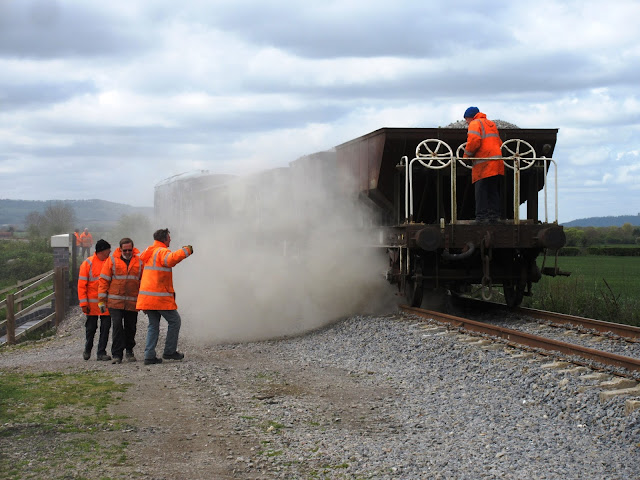 As John opens the chutes with the wheel, a huge dust cloud advances on the unsuspecting gang members. Not so much John, whoa ! 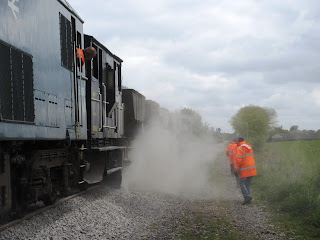 The train passes the camera and envelops the banksman trying to give instructions for the drop.

Maybe the loco driver can see better, but from the ground there isn't a lot to see through this big cloud. 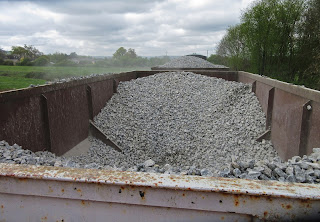 Up above things are a little better, providing you picked a wagon with the platform that was upwind. In seconds this 20 ton load disappeared down the chute and on to the new track. 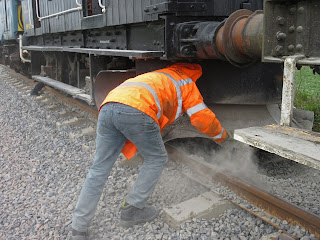 Heading north, the ballst drops were 'sharked' to transfer excess into the cess. Heading south a few moments later, a tyre was added to the plough for extra effect.

Here a GWSR director - yes, they get their hands dirty - cleans off the ballast and fine dust from the plough after the first move. It's dirty work, even these modest hand movements create their own little clouds of dust. 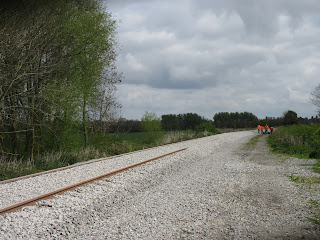 After the passing of the train, this is the result. More ballast round the sleepers, this to hold the track tightly in place so that it does not move after it has been stressed. Two trainloads were dropped here today. 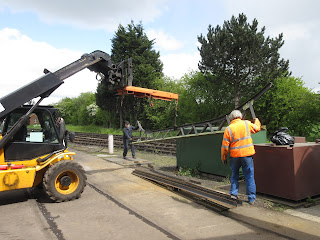 We went home to Toddington to have our lunch - sandwiches, alas, and not even that for one member of the gang, who made himself a lovely pile of them, but then left them at home - and we caught sight of the loco gang lifting one of the Broadway ridge purlins out of the workshop. 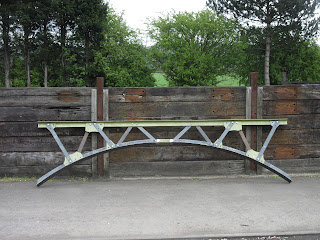 This ridge purlin is slightly shorter than the others, and is destined for the part of the canopy that connects with the footbridge steps. Love that arch!

The loco gang has been riveting furiously. There are 68 rivets in a truss for example, and it takes all day to do one. All the intermediate purlins are done, and 4 out of the 7 trusses. 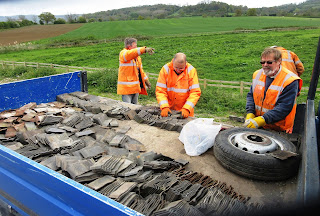 After lunch, it was back to laying out the clipping material. A vast quantity of steel SHC clips was required, we calculated. Nearly 2 stillages worth were stacked on to the company truck, which we had to go and borrow from B&S / the drainage gang, who were rebuilding the steps for a foot crossing nearby. They were kind enough to let us have it, provided we drove it to Alderton first! Why are things never that simple? But fair's fair, we did that, then returned to Little Buckland with about a ton of these things. 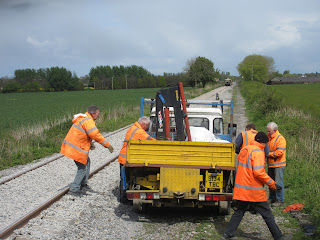 Moving slowly north, we made little piles every 18 metres with enough material for a length. The Landie had the plastics, yours truly on the truck had the SHC clips.

Peasebrook Farm is up by the trees in the distance. 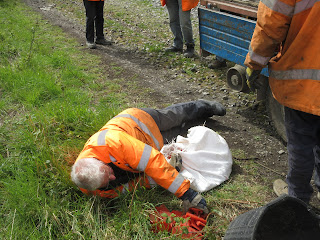 Not sure what happened to Robert here (he was not injured) but it must be an easy way of getting the plastics out of the bag through a small hole.

At the end of the day, we had stacked more sleepers (number not known at the time of writing), laid out all the materials for the next 1000m to be stressed, and dropped two trainloads of ballast north of Little Buckland. All with 12 men, not a bad effort, we thought. 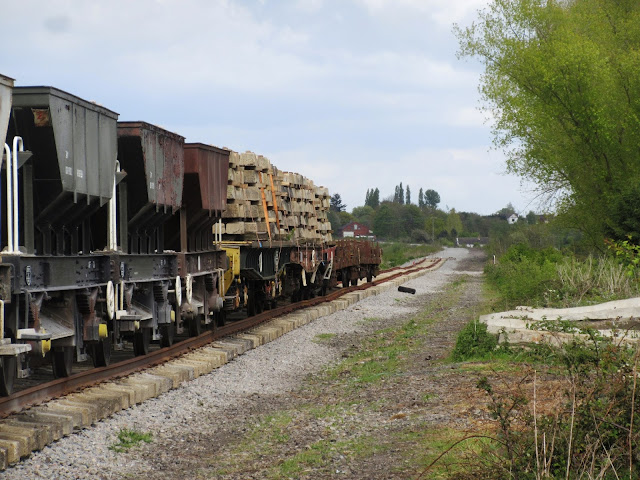 The extension train at Peasebrook Farm is now fully replenished. New rail, and two wagon loads of concrete sleepers. We are ready for the next laying session.

The contractors for the soil nailing here have arrived, and brought the first equipment in on Monday. 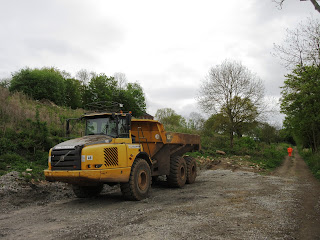 An enormous dumper has been delivered. It's a 25 tonner! It does make you feel rather proud that this sort of equipment is need to shift what our humble volunteers put there over the years with only a 6 tonner from time to time, and quite often only the little trusty one tonner that has been on the railway for so many years. It has a single cylinder Petter diesel engine, is hand cranked, and has never let us down. Probable date of manufacture: 1975. And still going strong, the best of British quality. 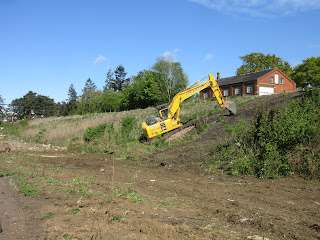 On Tuesday, actual work had already started, using a big 360 excavator. Here it is carefully scraping off the top layer of vegetation along the slope that is to be soil nailed. This is being done to give the soil nailing team better access to the slope to be stabilised. 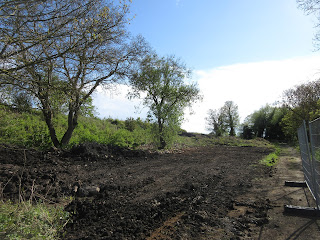 What was also intersting to note was that the many piles of material dumped here in the course of work at Broadway (mainly material taken out of the new platform and building foundations) have already been flattened out, and it looks almost serviceable for a car park.

Previously, this area was about 2ft lower, and was once used by the Broadway station residents for allotments. Now everything is at the level of the private road that runs down the side. 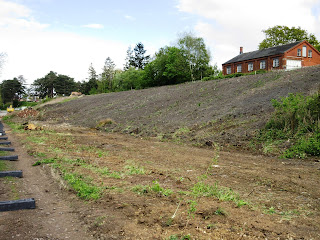 Today, the third day, the entire slope below the goods shed has been cleared of vegetation, and made flat. The once lower area in the foreground is now at the level of the private road. 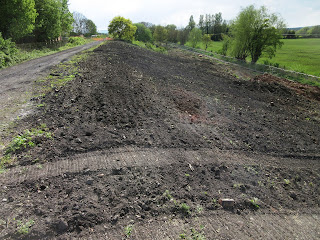 This is the same area, seen from above. The double track used to run on the left, while area under the camera, and slightly to the right, was once a long siding. This has already been partly removed, and the ash spoil used to flatten the slope.

The big dumper, which will be used to ferry the remaining Mythe rubble to the Childswickham end of the site, has been parked on the top. The trackbed has been blocked with Heras fencing, so no PWay movements through here now for 3 months.
Posted by Jo at 20:01