We split ourselves into two groups today (or perhaps two and a half, as we also had a track walker).

One group carried on with sleeper stacking at Gotherington (amount not known as we go to press, but they should have been able to complete the next train load of 320 now)

The other set off for Laverton south. 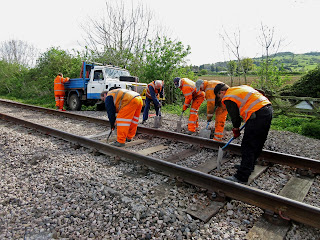 At Laverton south there is the crossing for a bridle way which needed to be reinstated.

First, dig out your crossing. 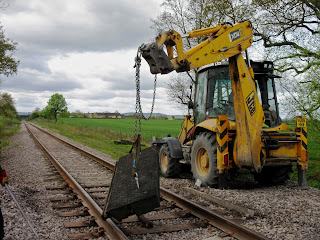 Then, summon your friendly JCB driver, to get him to lift in the parts. They are heavy. 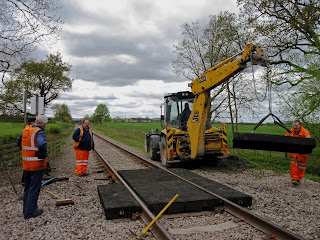 These rubber pads look simple to lay, but actually they are 'handed' and a bit of a puzzle to get right. They also interlock. 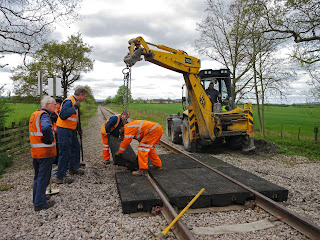 Here the last one is laid into position, the a bit of ballast is shoveled against them, so that they do not move before the ballast is heaped up left and right. 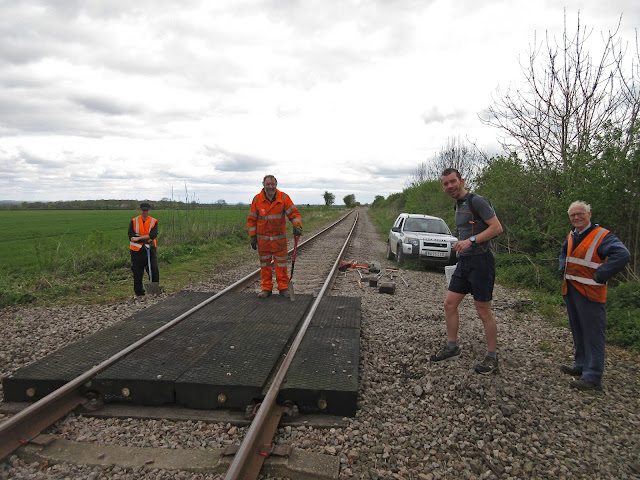 We were just standing back to admire a job well done, when a jogger appeared from out of the bushes, and we invited him to be the first person over the reinstated crossing. He was visibly happy to christen it for us! 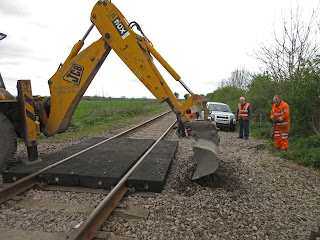 The jogger jogged off, and Steve took the opportunity to push the ballast together. This locks the pads to the rail, and makes a trackway leading up to them.
Our estates manager can be seen in the background, edging nearer and nearer in his car. 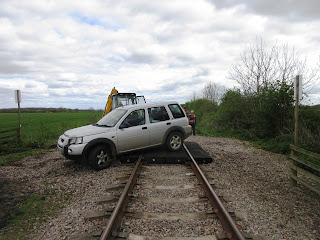 Steve had hardly finished, when he decided to become the second user of the crossing, which was not quite what we had in mind. Oh well. The crossing does make a handy place where vehicles can change sides from one side of the line to the other.

Social media today has ruined the art of conversation, it has now infiltrated our gang as well. Gr8!

At this point the track walker called in to report a broken fish plate, which had to be attended to immediately, as there were trains running. At the same time, we are trying to build an extension. Such is life.

We hopped back to nearby Toddington for a picnic lunch, our usual maitre d' not being available on this Easter Saturday. 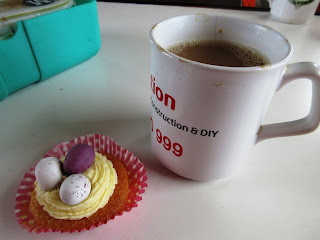 The mess coach was in the Parlour Road (why is it called the 'Parlour Road' when it was actually a cattle dock?) and from there, as we chewed over sandwiches and salads, we observed well filled trains and a crowded car park. Good news. Luckily Mrs. B had thought of us, and had baked little Easter pop tarts with mini chocolate easter eggs on. They were eagerly consumed. It was noticeable that those sitting further away from the end table with the tarts had one each, those sitting a bit nearer had two, or even three, while those sitting at the table with the tarts had - Five! 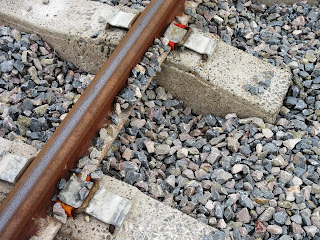 After lunch, we set off for Little Buckland to brush off the southern 500m of the next section to be stressed. The passage of the ballast regulator had left these rows of stones on top of the clips, which needed to be cleaned off before we lift the rail on to the rollers for the stressing. 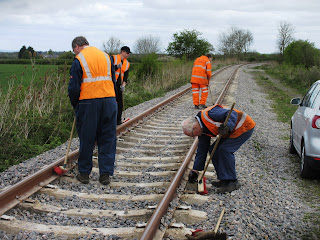 Here's the gang brushing the 4 sides of the rails at the south end of the curve leading to Little Buckland. This area was also the northern anchor point of the first length to be stressed. 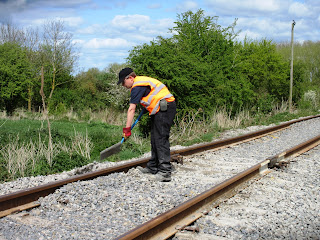 Leigh got the job of shovelling out the mound left by the regulator where it stopped. This is also the pulling point of the second section. (see the temporary fish plates on the right) 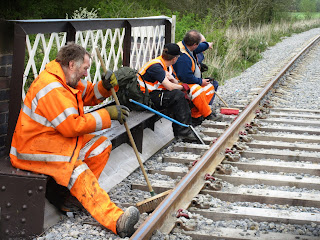 As we arrived at the pulling point near the bridge, we stopped for a well deserved rest.
Inspection of the second half of the next section revealed that it needed more ballast before it could be successfully stressed. We intend to do this next Saturday, if the Dogfish can be reloaded in the interim. 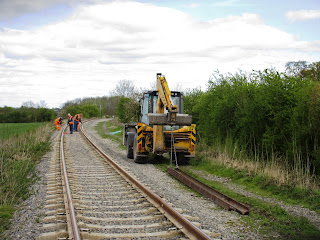 Following the lifting in of the crossing pads, Steve had the time to do a few more journeys with rails in tow for Broadway. It's quite a long, slow crawl from Laverton, perhaps 2 miles to Broadway north, then back again for more. 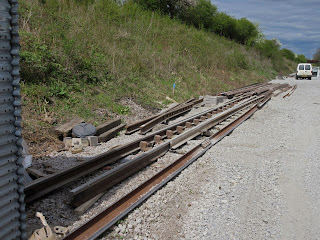 At Broadway, the pile of rails continues to grow. At the time this picture was taken, 36 rails had been taken up (18 pairs of 18m each then) and in the foreground of the picture you can see the component parts of the Laverton loop southern turnout, which at Broadway will form the northern turnout for the loop to be built there. Its timbers have also been moved up. One more week to go, and we will be denied access to Broadway from the trackbed for 3 months until the end of July. 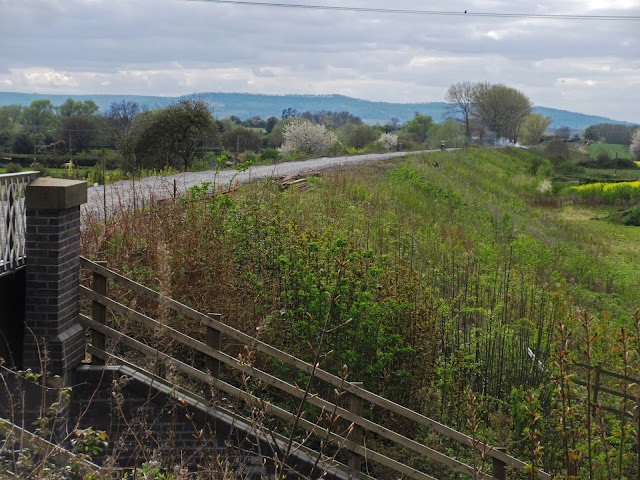 To finish off with, here's a view from the Childswickham Road bridge, back down the recently ballasted trackbed towards the extension rail head. This rail head is currently located at this end of the row of trees in the distance, which stand alongside Peasebrook Farm. In between you can just make out Pry Lane bridge. It doesn't look that far, but remember that the image is zoomed in. We're probably talking about 600 - 700 yards to go still. We're going to finish laying this, then hop over to Broadway north and start back in the other direction, with the embankment works going on in the middle.
Because of your blogger's almost continuous attendance ballasting for the best part of a fortnight recently, Mrs. Blogger has extracted a week's holiday in Cornwall in return. So please be patient for a week or so while we examine the flowers in the Eden Project, and perhaps, look over the fence at the Bodmin & Wenford.