On the road with the tamper

While the original 07 Mk5 tamper is awaiting a quote for the repair of its gearbox, the replacement 07 Mk2 tamper swung into action today and made a start on tamping the entire Broadway extension, i.e. the whole stretch from Toddington to the railhead. We need to have the extension tamped to the highest quality, in order not to have to go back to it any time soon, so to do it properly, tamping starts at Toddington north.

Today's job was a stretch of track which basically covered the through line of the former Laverton loop, starting a few dozen yards south of it. 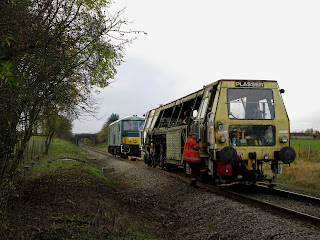 The tamper was pushed out to the site by the class 73, which then backed off to allow the crew to set themselves up.

This involves getting out the trolleys and support bars behind it, with a pair of steel wires which run from the farthest trolley, through the machine and all the way to the forward cab. This arrangement allows the machine to measure where it is going and what it should do.

It's an older arrangement, no longer required by the newer Mk5, but it worked fine, as we could see afterwards. 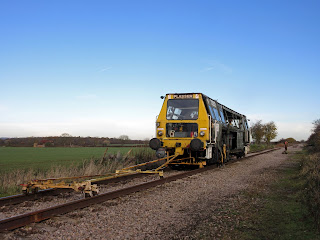 Here is the pair of trolleys, bars and wires fully rolled out.

Progress was pleasingly rapid, once all was set up. 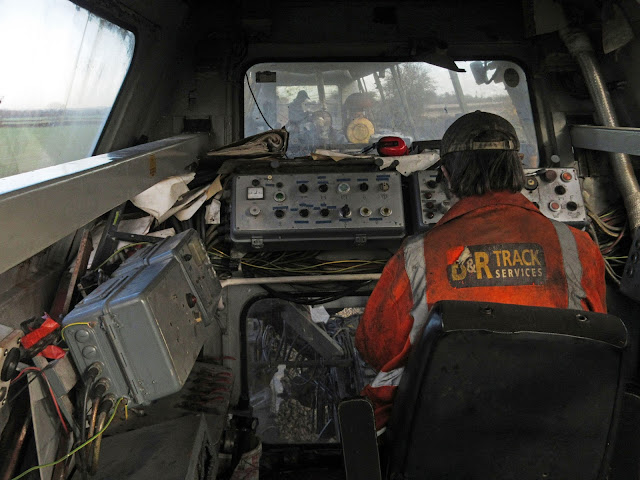 Here is Bob (the B in the 'B&R', the 'R' being just visible in the far cab) at work in the course of operating the machine. The process in this model is to a great extent a manual one, and it is the operator that moves the machine forward between each sleeper. It has one advantage in that you can easily identify any obstacles, such as cables crossing the track, or extra large gaps between rail ends, which can swallow the small diameter wheels of the trolleys - it has happened. 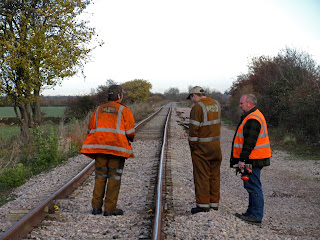 After a while a short site inspection took place, in particular to inspect the shape of the insulated block joint (yellow marks), and to see if it posed a problem for the tines. It didn't.
The slightly irregular path of the rails can be made out; this is what we came to fix. The location is the through road of the former loop at Laverton. 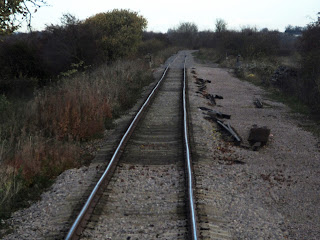 This shot from the forward cab shows the slight irregularities  being addressed today, and more substantial wobbles and dips in the distance, where the new track has been laid and provided with extra ballast to allow the tamping corrections.

In particular the area north of Laverton bridge shows a larger than normal dip, coming off the raised level of the bridge and its thicker deck. Manual jacking here to raise the track to a level that the tamper can handle easily proved fruitless, and a jacker / packer has been hired in for next week to do this. 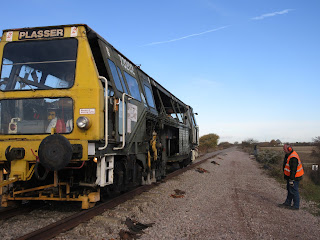 The tamper then arrived at Laverton bridge, here doing the last few yards, being observed by Neil, who had come to move the machine to a second site at Toddington. 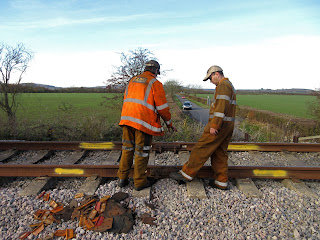 Once again the crew got out in order to inspect a potential problem; here the pulling point for the future stressing of the CWR. Again everything went fine. The larger gap here (deliberate) has been temporarily bridged with a short piece of rail and clamped fishplates, so no problem for the little trolley wheels with us. 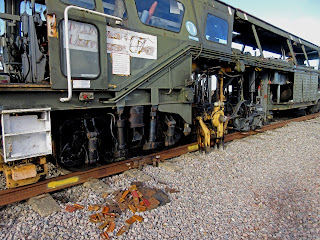 Shortly afterwards the tamper passed over the pulling point, and did a few more yards up to the top of the bridge.

This was the end of the first job today. 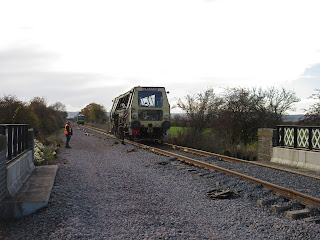 Here is the tamper stopped just before the pulling point, with Laverton Bridge in the foreground.

The class 73 is poised in the background, ready to haul the tamper back to Toddington for the second session today. 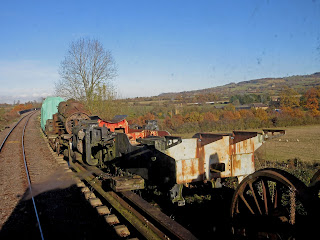 On the way back to Toddington, we passed this kit of parts for an engine that could be very useful on our line, being modern and not too hungry for coal.

Anyone see what it is yet? 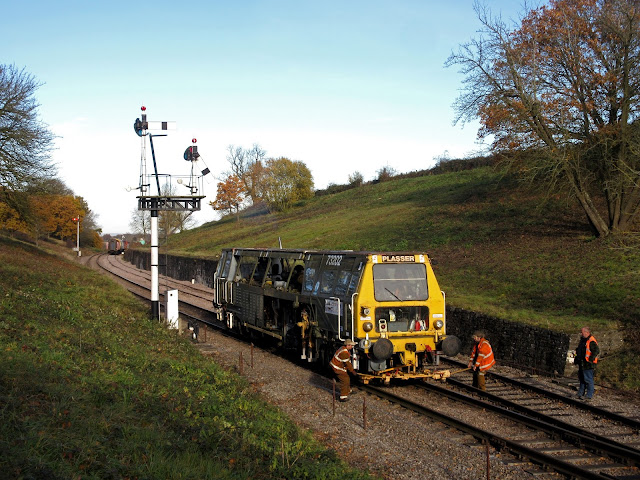 After being taken back to Toddington, the tamper was readied for the second session, which starts at the beginning of the Broadway extension, just north of the stock siding. Bob and Rick roll out the trolleys again.

The second session also went very well, and we did more than expected.The tamper worked its way all the way up to the signal that can just be glimpsed in the distance, just short of Stanway viaduct.  This will be the starting point for Monday.


A quick glimpse into the shed at Toddington showed that work on the authentic canopy for Broadway continues. 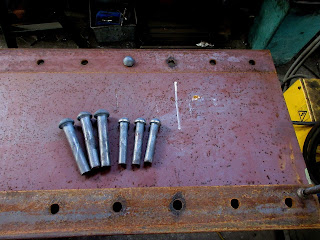 More fascia boards are under construction, and a large pallet full of rivets has been delivered. They come in two sizes. The smaller ones are for the fascia boards, and the larger ones for the trusses. 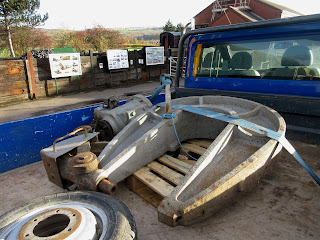 A riveter has also been borrowed, seen here on arrival in the back of the Transit. It's enormous! It looks as if it could happily handle cold riveting, but in fact we are going to do it hot, the traditional way.