Following on from the Jacker / Packer

After the successful lift made by the Jacker / Packer last week at Laverton, the bump over the bridge has pretty much disappeared. It's a great little machine! It did leave behind about a 100yd section of voids, where the track has been lifted out of the initial bed of ballast, and this now needs to be filled again with another ballast drop. That takes us to today.

This morning, Steve spent 3 hours once again filling the 6 Dogfish - you have to wonder how many times he has now done this, bless him - and just before lunch time they were taken to Didbrook (just south of Toddington) where 4 of the 6 wagons were emptied into a gap created by a recent maintenance relay. Lunch for Steve was a hasty bacon bap with the Hayles gang. He turned up very late there, and had the very last one. He was almost served up a spare bap with a mouse in it, if evil plotters had had their way. We are awful. 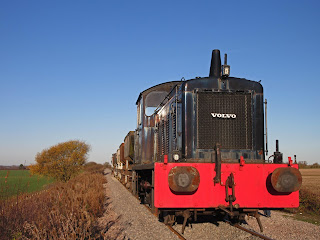 Two o'clock saw the ballast rain arrived at Laverton, here photographed from the Malvern side, as the low winter sun makes photography a bit more awkward this time of the year. Can't go any further left, it's a steep slope of angry brambles here.

The train was unusually not headed by the trusty class 73, but by the 04 shunter, the yard pilot at Toddington. Yes, it's a VOLVO ! And you thought they had a Gardner 8L engine.
Curious coincidence: One of the leading lights in the loco dept has a Volvo..... 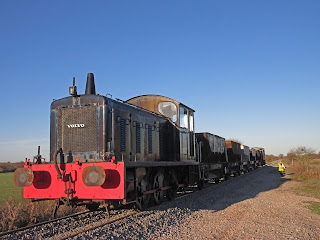 Here is the ballast train parked at the 'hot spot' just north of Laverton bridge. Stevie is just directing Neil to park it in the right position. 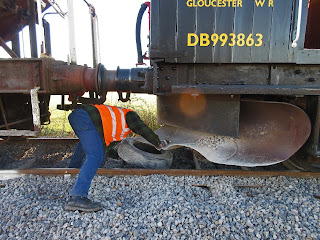 Neil here is fitting the tyre to the nose of the ballast plough, while Stevie inside the 'van is winding it down. The wheel was so stiff we found him on his hands and knees yanking at it to get the spokes round.
Yours truly opened the hopper doors on the two Dogfish in question. 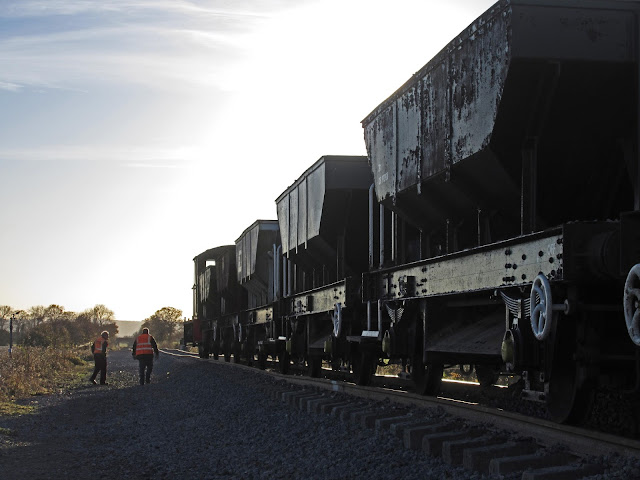 With hopper doors wide open, a small quantity of ballast falls out until the chutes are blocked by the pile. Neil walks back to the loc to draw the train forward over the voids, some of which can be seen in the right foreground.

We all patted each other on the back when it appeared that two Dogfish with 40T of ballast were just right to fill the voids in the 100 yard stretch. Job done! 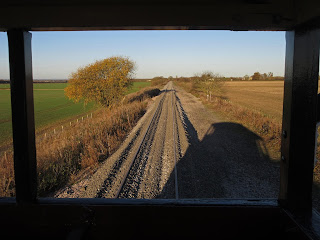 The view towards Broadway shows a nice deep bed of fresh ballast, neatly swept left and right into the shoulders. Now for the tamper to consolidate this, then it can move on further to Little Buckland and Peasebrook farm.
At the time of writing, the guess was that the tamper would do this in the latter half of the week, after first consolidating a maintenance job elsewhere. We shall see. 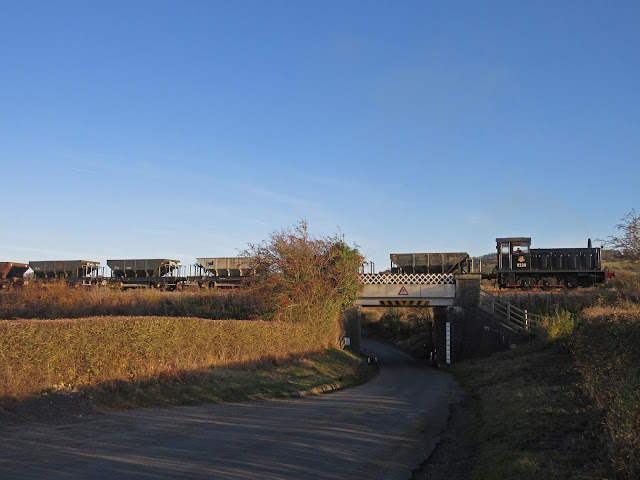 This is Laverton Bridge seen from the Malvern side, and on top of it the now empty ballast train is about to set off for Toddington again. 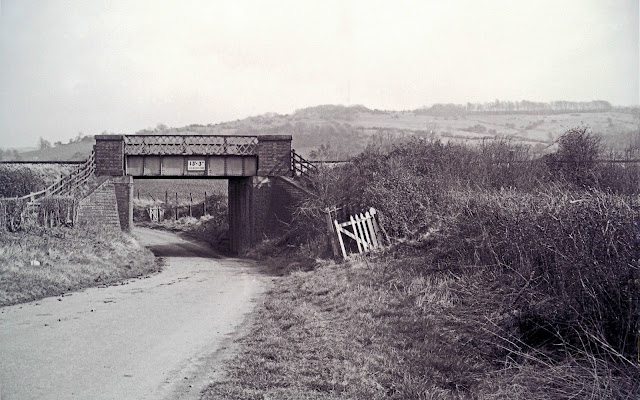 You might find this historical picture interesting. It was lent to us by Tony Harding, with his permission to use, but not for you to download, so please respect that. We have reduced the resolution just in case.

The two pictures were taken from exactly the same place. We don't know the date, but it would have been the period 1960 - 1976, as the tracks are still down, but the halt is clearly out of use.
Note the two white gates - one in the foreground, one beyond the bridge. These were the entrances for the paths leading to the old Laverton Halt platforms. The halt was clearly on the southern side of the bridge. 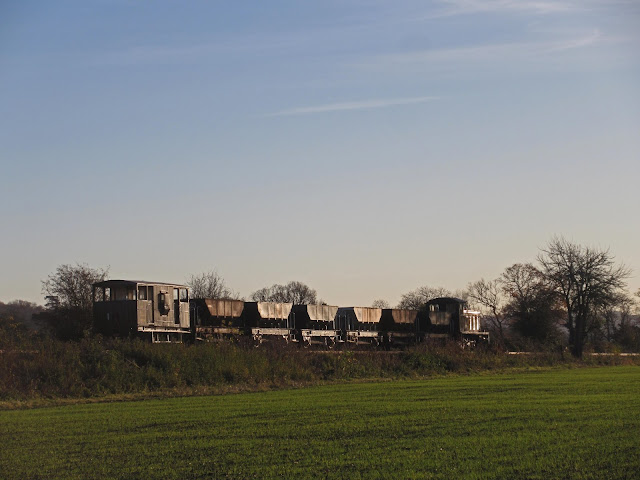 In our final picture, the empty ballast train trundles back south towards Toddington.
It's a photographer's dream - a glint shot! But of an 04 shunter? Well, we have to start small. Maybe Formarke Hall here soon !