All the remaining clips on the 20 length headshunt at Laverton have now been removed, and the rail tipped out. 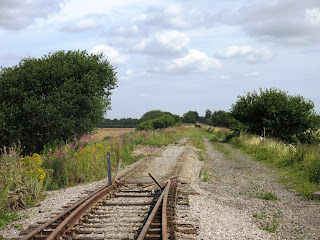 Today Steve took out pairs of rails and dragged them up to Broadway for further use there in due course. In this picture you can see the end of the northern turnout, with the first pairs of rails of the old headshunt removed. The JCB is returning from Broadway in the distance. 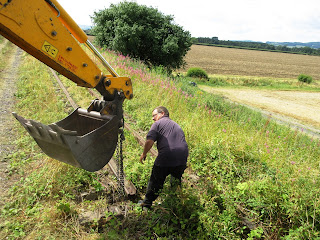 After quite a few shuttles up and down over 2 days, almost all of the headshunt rail has now been dragged up north.

Here Steve is attaching the last pair of rails to go.

The headshunt section is now ready for removal of the concrete sleepers. These will be stacked nearby, the trackbed graded, Terram and new ballast added, and the sleepers, together with new rail, relaid back in their places. Plenty for the PWay gangs to be getting on with. 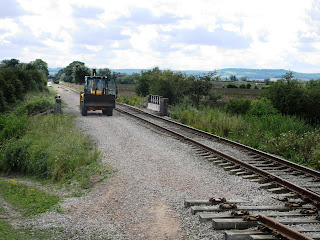 Here you can see Steve just passing over the road bridge at Laverton, with a pair of rails from the old loop in tow.
The 2 and a half lengths between the bridge and the turnout in the picture still need the rail replacing, and then the turnout can be disassembled and also taken up to Broadway.

New rail for all this is arriving in two lots in the first half of September. After that has been laid - and it needs to be laid quick, as we need the bogie flats for the next delivery - then the push towards Peasebrook Farm can begin. 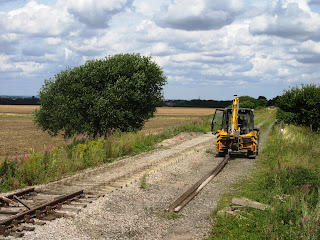 This is how the rail is taken up to Broadway. It's basic, but very economical, and it works. The pointwork may need a trailer to take it up.

Little by little this is becoming an attractive reality. Over three weeks, three trusses have been assembled. Excellent progress! 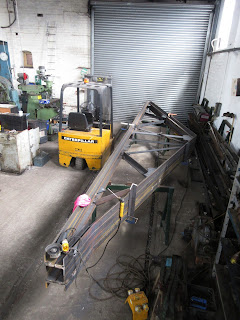 The first two are in a pile, one on top of the other, in the loco workshops at Toddington. Our Broadway painters have been down to inspect the extent of the work required from them.

Nearby, a fascia board was being made up. 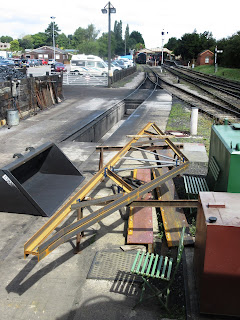 Outside the loco workshops, the third of the seven trusses was being assembled.

Underneath are two more fascia boards. Three purlins are in the loco shed

It will be very interesting to see what the central arches will look like, with their characteristic curves. None have been started yet; they will be done last.

Note that the car park is full, and should translate into fare paying passengers. The trains certainly looked well used - well, it was P&O in charge - and so was the cafe in Winchcombe, always popular.


With Mrs. Blogger stationmaster at Winchcombe today, a quick trip was made down there to say Hello and enjoy a cup of coffee in the Coffeepot.
P&O trundled in, and what a magnificent sight that makes too. Winchcombe, with its cafe and passing place for trains, is a great place for people to linger. 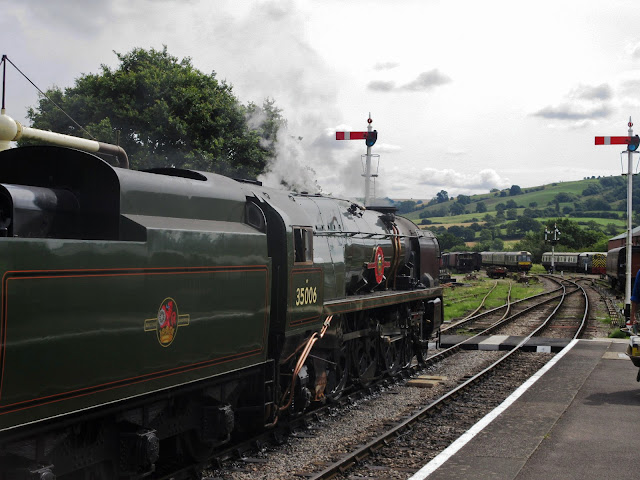 This magnificent main line loco pauses to allow the DMU to arrive, get the token, clang the signals, great 'business' about the station. 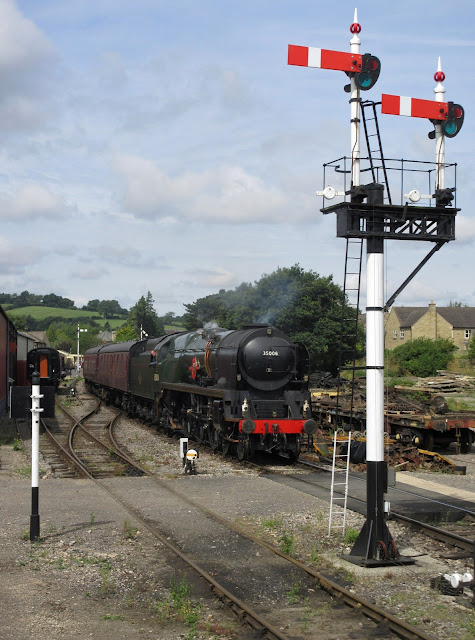 Then, off she goes past the bracket signal by the C&W shed. Great stuff !


Finally, this flew over Winchcombe today: 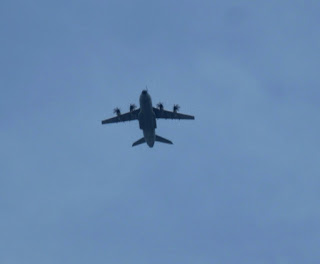 Strange how those propellers rotating at speed give the impression there is a segment missing.