A day out with the tamper yesterday, and a useful chat with the PWay gang.

There don't appear to be any images around of this tamper at work, so here's a little report, and an extension update. The tamper is an 07 and it's been hired in to do regular maintenance on the running line, working north from CRC. Yesterday it had reached Gotherington, where we tamped the loop, then worked further north to the overbridge beyond the sleeper depot at Skew Bridge. 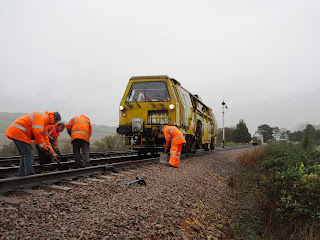 The job was to fill in the voids in the ballast left by the tamping tines. Looks simple enough, you just follow the slowly moving tamper and shovel ballast into any holes. However, after an hour of non-stop shovelling your muscles start to complain loudly, and that rain forecast to ease off during the morning just hasn't ! The march of the tamper is relentless, and after 5 hours, and perhaps a mile later, we were pretty much exhausted. 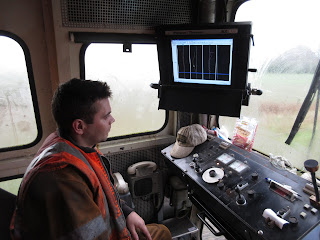 There is a brief respite between runs, as the tamper passes over the next stretch to be done and measures it. The data is stored and acted upon during the actual tamping run.

This picture taken during one of the measuring runs shows the second man and recording screen with up to 4 variables visible.

Ideally, a team of 6 on the shovels is needed each day during the week. Thursday looked a bit bare, with only 3  PWay crew registered (or still fit after working Monday, Tuesday and Wednesday!) so two members from BAG came down to help on a BAG non-working day. 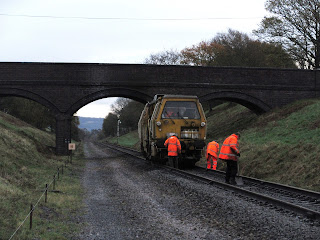 Having tamped one side of Gotherington loop, and completed the second half of the other, the machine skipped Gotherington platform (we tend not to tamp within stations, in order to avoid raising the trackbed) and continued north thereafter, reaching this bridge at the end of the day, when the light began to fail. 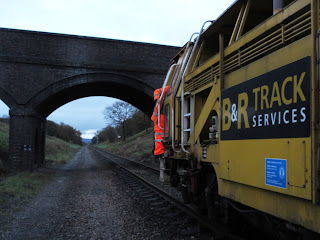 A grateful member of the gang climbs into the cab, which is dry and well heated. It even has a little grill to heat your lunch! We were then given a lift home to Winchcombe, and Toddington. 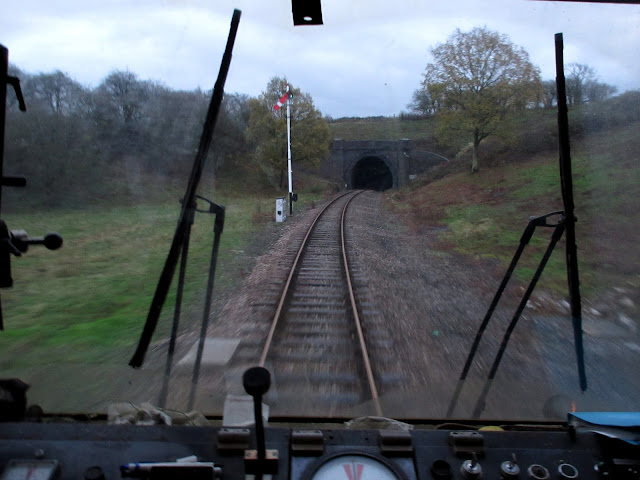 There isn't much room on board - three seats at one end, two in the other - but those in the driving end on the return journey got this view of Greet tunnel. Who knew it had such a long curve in it?

After this week, the tamper will return in March to complete the job along the rest of the running line.

Extension update:
The extension railhead is now within a stone's throw of Little Buckland bridge, maybe 6 panels to go. We now have the opportunity of winter maintenance during the short few months when normal trains don't run, so expect to see the PWay gang out along the main running line instead. Currently they are moving a point into a more logical position outside the loco shed at Toddington, and in January and February they will be relaying the platform 2 road at Winchcombe, and the southern part of platform 1. This ties in neatly with the B & S project to lengthen platform 1, and some of the spent ballast will be used as infill there behind the new wall now being built.

Trains start running again in March, so the Winchcombe relay needs to be completed by then. In the meantime, contractors will be replacing a damaged drain that crosses under the extension trackbed just short of Little Buckland bridge, and this is in the way of the 6 panels, so they can't be laid until that job is done. A culvert near Peasebrook Farm also needs closer investigation, as it has a tree growing on top of it. The trackbed has been neglected for 40 years, and no doubt little was done to maintain it in the closing days, so you can imagine that we can't just clear the undergrowth and start laying rail. There'll be quite a lot of 'civils' before we get to that stage.

What is perhaps less well known is that the final lengths of the Laverton extension also need relaying, from a point at a CWR 'breather' south of the loop, through the loop and into a headshunt north of it, latterly used to store the PWay relaying train. The slightly lighter rail used here was laid during a period of financial constraint, and while it is suitable for station confines, it needs to be replaced with heavier, main line quality when the loop is taken out. This will take place from March onwards, when the loop is removed, ready for transfer to Broadway. Initially, the materials will be stored, not taken to Broadway immediately. Hence the next purchase of new rail, a question often asked, will be for this stretch, from the southern Laverton 'breather' to the start of the extension. The rail being replaced is not wasted, but will be used at Broadway for the station loop and northern sidings. We will then have a high quality, new CWR line all along the extension.