The ballast line from Peasebrook Farm gets ever nearer. Today saw the back broken of this job, as we joined up the line heading southwards with the short stretch north of the ballast pile. At last, nearly 800m done. 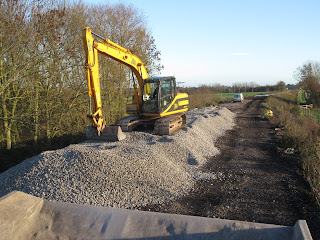 Wednesday we had a day off from ballasting, but the quarry did not, and this morning 200 tons of new ballast delivered yesterday sat there to greet us. Here is the 360 making itself a path through to the end, in order to start loading the dumper in the foreground. It was a beautiful day, and quite windstill. That would soon change, but we were ignorant at that point. We started making serious inroads into this new pile, bringing the ballasted Terram further south, round the bend and giving ever shorter trips to the dumping site. You can now make out the white strip of Terram marking the tipping site at this point.

At lunch time, our mobile site hut in the form of our Estate Manager's car arrived. By this time, Steve was starting to ready the area of the former pile close to the bridge, so that we could lay Terram here too. It will be the last stretch in this area. 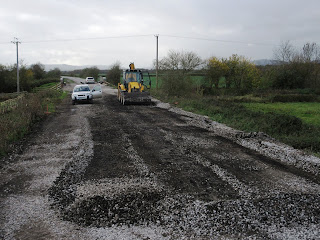 We snuggled down in the Freelander, and enjoyed cups of coffee from his warming flask. 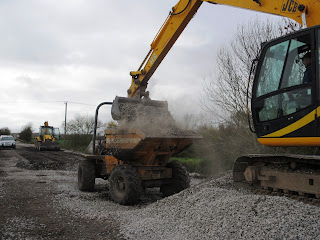 After lunch, as we got out of the car again, the weather had changed. Clouds were skidding across the sky, and a strong wind was making its presence felt. The dust from the newly delivered ballast was so strong that Adam had to close all the windows in the 360 to keep it out.

Yours truly had no windows, so decided to stand upwind from the source. 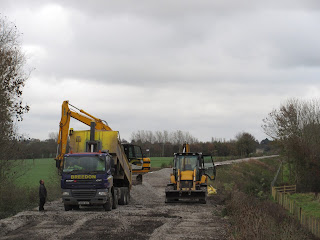 Even more ballast then arrived, perhaps 220t in total. Steve is having a chat with the driver as to where the next load should go. What we don't want is double handling when this stretch, where the stockpile is, is also laid out with Terram. In the background the stretch that is now ready extends into the distance, round the rest of the bend. The grey silo just visible belongs to the sewage farm at Pry Lane. 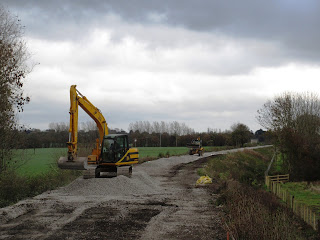 This shot shows how the ballasted section from Peasebroook Farm has now indeed joined up with the area of the ballast pile. That just leaves 100m to do under the area of the stockpile. Steve is fine tuning the levels in the background, necessitating an occasional extra trip by the dumper where a low spot has been found. He also made sure that the down line is suitable for vehicles to use. 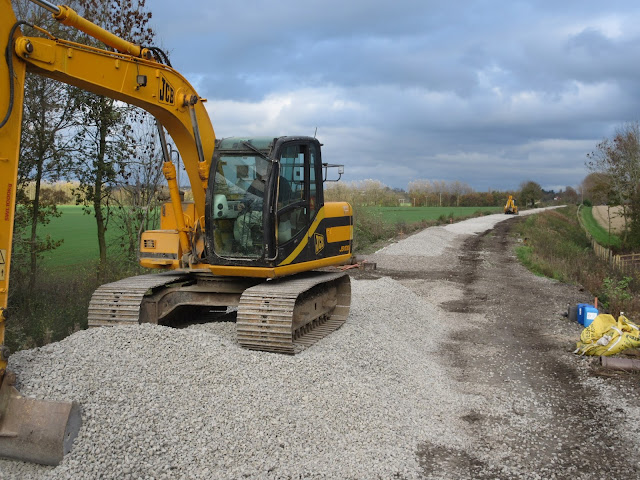 Suddenly, there was a burst of sunlight out of the clouds. It can be very beautiful here, if the weather is friendly. Steve is pottering around in the background fine tuning the levels, while the 360 in the foreground deals with the diminishing stockpile found this morning. 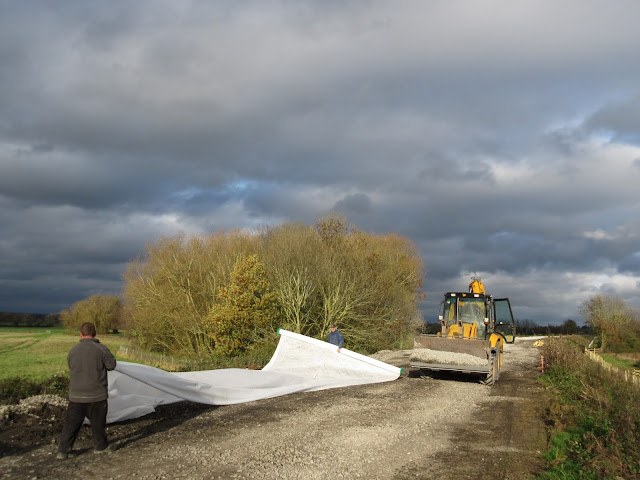 Another ray of sunlight penetrated the increasingly threatening clouds above. We had just laid down this stretch of Terram, when a gust came up and whipped it sideways.  There followed a scramble for any bricks, rocks, anything heavy that we could scrounge from the undergrowth to weigh it down until we got some ballast down on it. The Terram has to be laid fairly accurately, because the tracks laid on top tend to follow it. 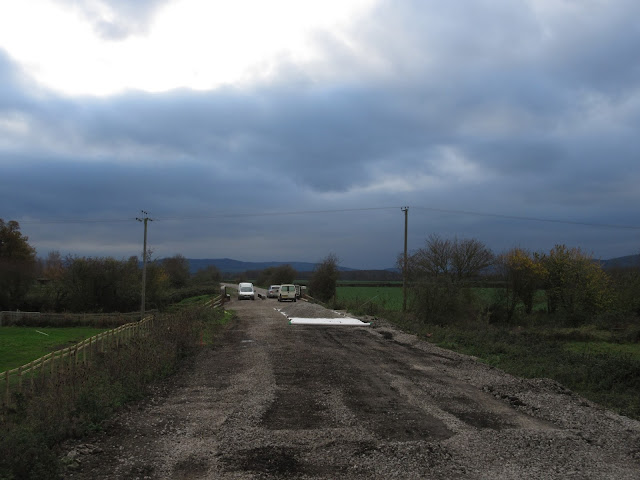 A look south shows the last roll of Terram now started by the bridge. The sky turned an angry dark blue, but the rain held off, and we stayed dry.

Tomorrow may see this job finished, or possibly Monday. The crew doing the ballasting will be back down to 2 again, as yours truly is doing a trip to Crewe tomorrow to fetch a newly acquired diesel tank for the railway. We should be able to enjoy the Staffordshire countryside at leisure, as we crawl down the M6 on a Friday afternoon, but the company will be good.