The first steps to ballasting

Today saw the first work on the actual extension track work. This was in the form of 200m of terram, covered in an initial thin layer of ballast to hold it down. We started from the current headshunt. 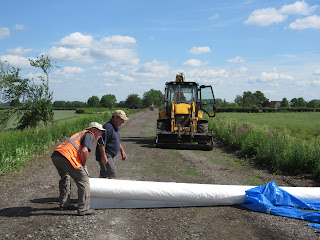 Several rolls of Terram were positioned along the trackbed, and a pile of new ballast was positioned in the 60yd gap that the gang created on Saturday. Here are Alan and Steve getting the first roll ready. Luckily the wind, often notorious here, was kind today, with just a gentle breeze, which didn't make our material flap too much. 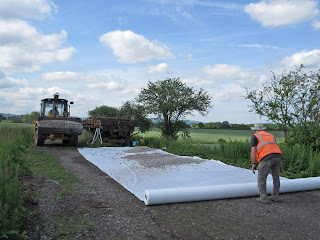 With the first 20yds rolled out, Steve was able to help himself to a bucket load from the pile down the track, and bring it round to the start. The laser level you can just see will help us get the depth right, but today's job was just to get enough down to hold the Terram in place. 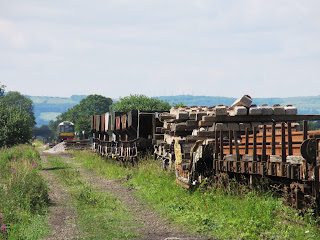 The pile of fresh ballast is between the Pway train and the end of the turnout, and yes, there were trains running today. We are that close to the end of the line, but hoping to move away further and further...

We've got our Dogfish wagons ready too, some recently overhauled, so we're ready to go. 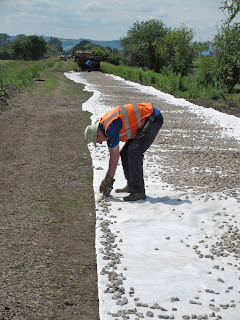 The Terram is wider than we need, so don't worry too much about the line we took - it straightens out as you can see.

Here is Andy doing a bit of 'manual labour' laying stones along the edge, in case the wind changes direction and gets under the textile on the Cotswolds side.

That's a nice row of stones there. Keep going, Andy! Just 2 miles left to do. 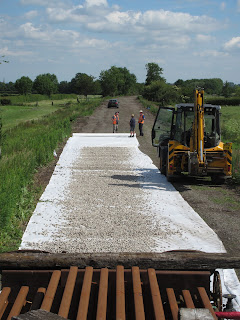 Here is the view from the Pway train, looking north. The trackbed has been further graded, and a roller brought in to compact it, so that the stones do not puncture the Terram from underneath.

After the first 30yds, there's a little site discussion to see how it's going.

The scrub at the start of the curve to Little Buckland in the distance will be cleared when the bird nesting season is over. 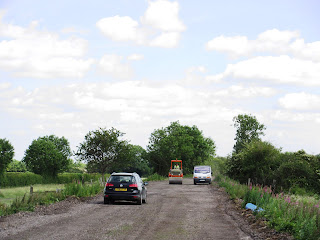 It was quite busy on the trackbed at one point. Volunteer's car, roller, contractor's van, second roll of Terram. Not half as busy as tomorrow though, when the real ballast starts to arrive. This will be emptied on top of what we put down today, for a depth of 8ins, required for laying sleepers. There'll be loads of large lorries running up and down here tomorrow. 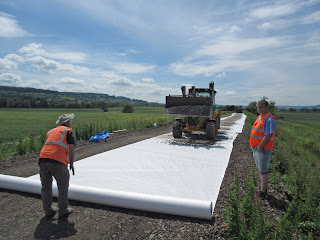 In this picture quite a bit of progress has been made (given that Steve is getting his supplies of fresh ballast from a fair distance away) and a new roll of Terram has just been opened. In all 200m of Terram were put down today, more is due later. 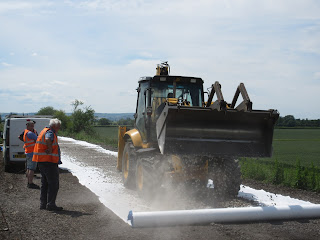 Once again - after CRC2 on Monday - there was lots of dust, especially if, like Neil, you stood downwind from it. At least it was dry. On Saturday, having walked to Little Buckland, the entire Pway team of 15 was soaked to the skin by a downpour while walking back to their cars parked at Laverton. It's quite exposed on this embankment, but at least the views are fabulous.

We hope to be able to give you a brief update tomorrow, after the lorries with the ballast drop have been in.