Today was the third day of ballasting, i.e. laying down an 8 inch layer of newly delivered ballast on top of rolls of Terram.

The day started with three of us, but soon Steve was called to Toddington with the JCB, leaving just Adam on the mini digger and yours truly on the 6T dumper. This Adam loaded surprisingly quickly each time, so the pressure was on, running up and down the extrension between the ballast heaps and the 'coal face' where the ballast was being dropped. This slowly moved northwards, about 6m at a time. 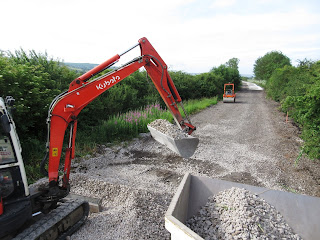 Here is the opening shot of the day. We're working from the ballast drop near Little Buckland, and in the distance, now into the curve, you can see some uncovered Terram, where worked stopped on Friday. 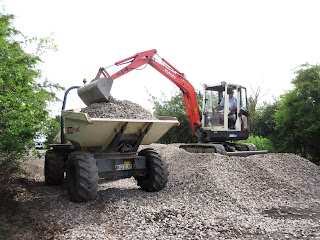 Although it's only a mini digger, it managed to fill the big dumper surprisingly quickly. It's got an expert driver! (you owe me now, Adam)

Our supply at this point was 120 tons, or 6 lorry loads. These come first thing in the morning. Adam has parked himself on top of the pile, which is a very efficient way of loading the bucket. Not so far to reach up each time either. 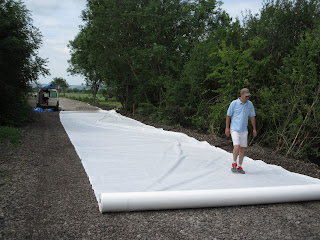 Soon we had covered the remaining Terram roll right up to the end, and it was time for a new one.

Before you can roll it out, the mini digger rectifies any unevenesses that have occurred, and the big roller then gives it a smooth surface, so that there are no projections that might puncture the sheet. 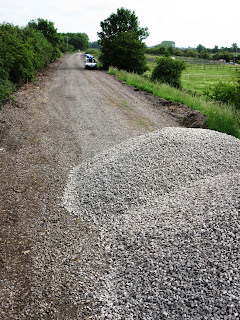 Here's a view from the ballast stockpile the other way, looking north.

In the distance, you can make out a telegraph pole - that is the site of Little Buckland bridge, the target for this first piece of track extension. It's a total of 800m from Laverton Loop. We've got all the kit for it. We should end up just beyond the bridge, with the rails we have in stock. 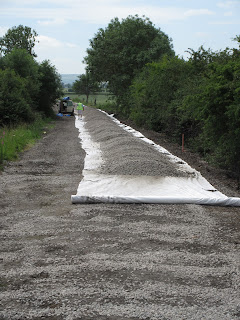 A couple of hours later, the piece of Terram Adam was rolling out, two pictures above, looked like this.

Lots of neat little dumps, which Steve still has to even out, and spread to the correct depth.

We have to be very exact, as this new ballast is expensive and we do not want to waste any, yet have enough thickness for the tamper to pass over it, without puncturing the Terram. A delicate balance then. 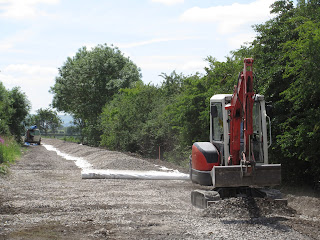 Before we roll this bit of Terram out any further, the mini digger has to even out the trackbed one final time (it's already been done once, but with all the traffic on it, more lumps seem to occur). Then back to the vibrating roller.

I've got an automatic watch, which is now wound up into the middle of next week ! Some vibrations, that. 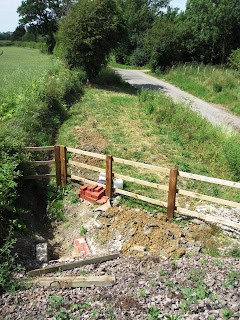 You might be interested in this snapshot off Little Buckland bridge, looking towards Aston Somerville. Bottom left is the mouth of a drain, which Andy P has rebuilt most beautifully (a few more bricks due to go on, by the looks of it) and the most impressive thing is the channel leading away from it, by the hedge, which has seen a lot of dedicated spade work. It must have taken ages, but now the water will run away again, and not undermine the embankment any more. 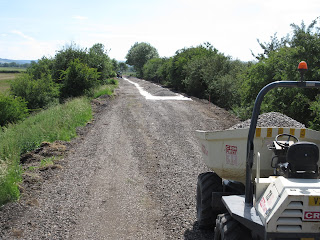 This picture shows the new Terram roll fully unrolled, and with ballast tipped right up to the end of it. This is in fact the final dumper load of the day.

We are some way round the curve, as you can see. 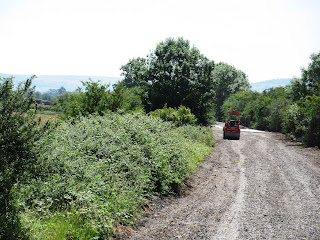 Can you zoom in on this?

The picture shows, from most of the way round the curve, where worked stopped today, and in the distance on the left, you can see the starting point with the Pway wagons parked on the headshunt. 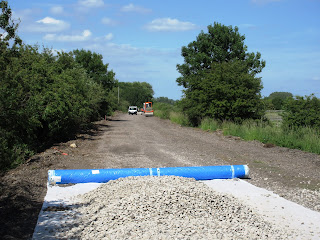 Today's last picture, work stopped here. That telegraph pole looks a lot nearer now. The next roll of Terram (each roll is 100m long) is ready for laying down, and the last thing we did was regrade the next 100m stretch, and roll it, ready for tomorrow morning. After that, we will need one final roll to get over the bridge.

Noted today: two Merlin helicopters (big jobs, they are) and a fox, 100 yds away, stood on our ballast dump, completely unconcerned by our activities. He even came back for a second look, very casually.

Tomorrow, we should all but reach Little Buckland bridge with the Terram/dumping. Steve will probably even out to the correct depth that which we have already dumped, and then...... there was talk of track laying !

Soon we shall be laying down the first 5 panels. This is what it's all about, and we hope to show you this milestone event.
Posted by Jo at 17:35