And over the viaduct.

A dry day at last, so regular work of painting and fitting timbers continued normally again. 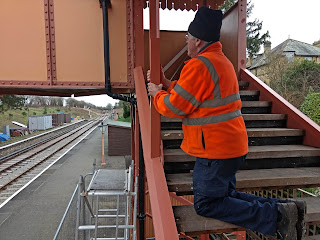 Neal has now cut everything on the Cotswolds side, and from the bottom up to the intermediate landing on the Malvern side.

In the picture you see him start work on the last two, upper, sections. 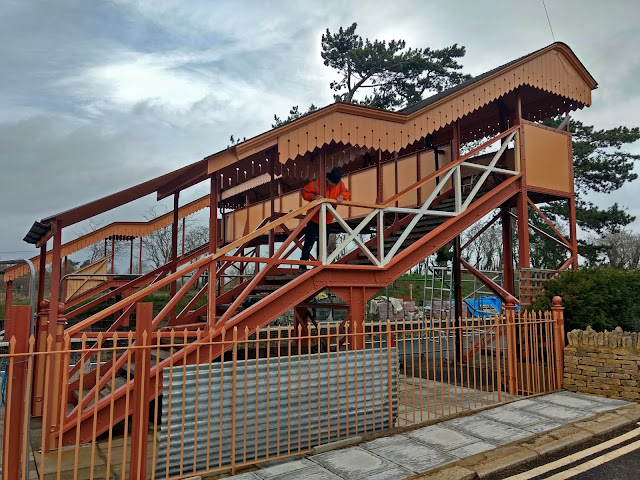 The Cotswolds side has been completely trial fitted in this picture. Actual fitting should happen soon, assisted by a healthy amount of mastic in all the joints and mating surfaces. For example, when this was taken down again, water was found standing underneath the bottom timber in the intermediate landing here. We will try to prevent this.

John and yours truly painted all the white timbers in the picture in undercoat the same day - a second coat is still outstanding.


Saturday with 'Dennis the Menace'.

We said it last Saturday, and now say it again - this is the day of the big storm, but the name has changed from Ciara to Dennis. Same job, different storm, hey-ho. 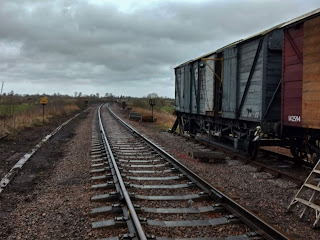 You have a long walk from Toddy to the viaduct to start with, not so bad because the wind is blowing you along from the south.

We sheltered in the mess coach for a while, but after a decent interval there was nothing for it but to climb out and face the weather. 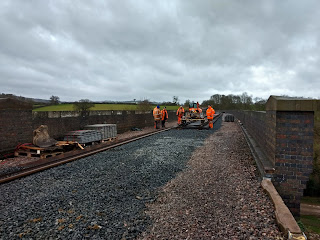 After the team on Wednesday clipped up the remaining panels from last Saturday, we had just 2 panels left to lay today, before the ends of the track were reunited again. Two panels is not much for us, but the dreaded question was, would the rails fit back together again? Would there be a gap, or an overlap? Surely one or the other, a perfect fit was highly unlikely. 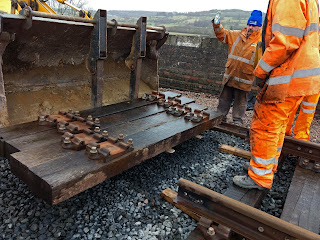 Stevie brought the hardwood sleepers back four at a time, and we laid them 26 to a panel using little offcuts of wood for spacers. 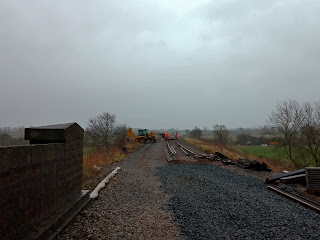 The end was in sight mid morning, but as you can guess from the picture it was raining and the high winds whipped the raindrops on to your face and made them feel like stinging hail. We turned our backs to it. 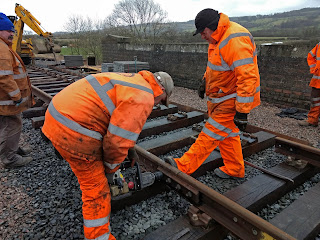 The penultimate panel was laid in and Neil here offers a helpful and vital foot to Bert Ferrule as the fishplate nuts are tightened up.

Neil had a decent wrap around sort of cap on but it was his, of all caps,  that the wind whipped off and threw up against the cab of the JCB some distance away. Neil went galloping after it, waving his arms at Stevie to cease operations until the vital piece had been retrieved. 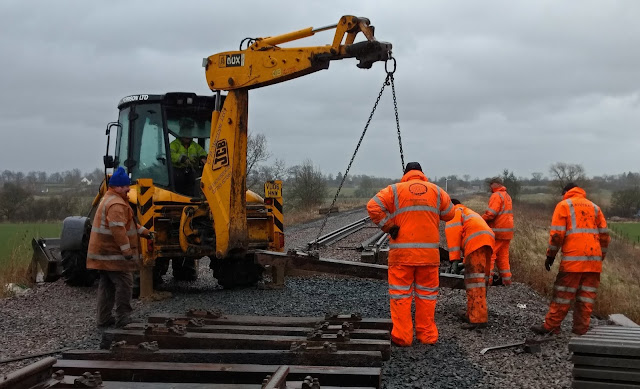 Soon the last few sleepers were lifted in, and at this point we were actually off the viaduct already, with a growing sense of achievement. But how about those rails, would they fit back in the space? 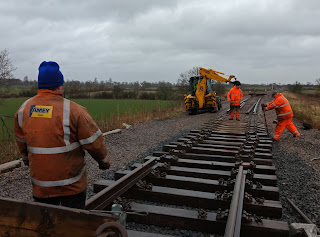 With the last few hardwood sleepers laid back in, we had a quick session with the bars to line them up.

It's Bert Ferrule wrestling with the bar, and Nigel, collar rolled up high, who's calling out the directions. 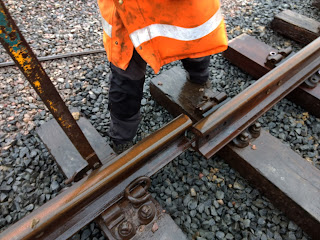 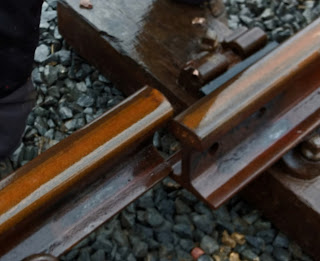 There is a quarter of an inch in it - not bad after 11 panels, but it still doesn't fit. What now?

There was a lot of wrenching around with bars to try and prise the two rails apart, but what did it was the simple idea of jacking up the penultimate rail, which due to the curvature created, made it so very much slightly shorter. But enough! The two rail ends popped together, we dropped the jack and plated the ends up quick. Job done. We relaid 11 panels round a curve and ended up with a mere 1/4 inch difference. 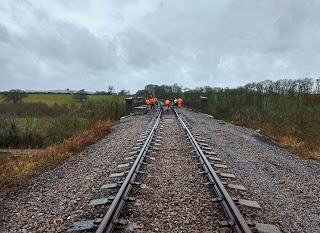 An executive decision was taken to leave the job for what it was for today, retire to the mess coach for lunch, and let Dennis the Menace roar without us for the rest of the afternoon.

A little more fettling is required to smooth the curve and take the stress out of the tight joint between the last two rails. 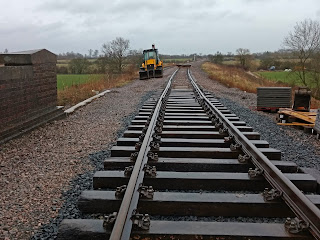 We packed up the tools and pushed the Permaquip trolley back over the viaduct. Looking back behind us - unlike Lot's wife we were not turned into a pillar of salt - we felt pleased that we had got everything back in, with a minimum of complications really. A job well done. 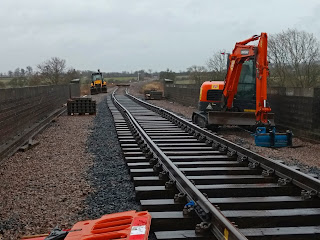 This kink towards the end still needs straightening, rough packing of some hanging sleepers, as well as clipping up the last panel are the next jobs.

The first train runs on March 7th! No pressure then... 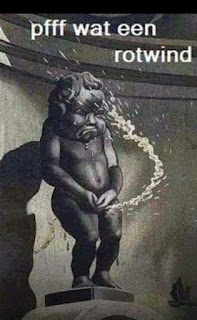 We can't go into the finest details of what work is like on a viaduct in a storm with high winds and rain. That would be too personal.

But over in Brussels is a little statue with whom we have every sympathy.

At least we were allowed home at the end of the day. We hung the wet togs up in the garage (they were still dripping even after an hour of hanging in the mess coach), put the sodden boots, gloves and beanie in front of the fire, made a cup of coffee and settled down with a book about the Tuffley loop.