There are 20 of them, 5 for each side, of which 1 short (for the intermediate landing) and 4 long ones.

The longer ones are 7ft in length, so we've laid one out to give you an idea.

They look as if they ought to sit on the stringers, but Neal advised that these are in fact the ones that go on top of the sides. 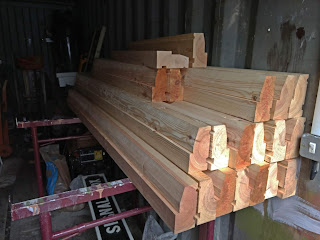 We've stored the 20 timbers in one of the containers for now. You can see the profile that was shaped on the ends here. Essentially it's a chamfer and two drip grooves.

There is quite a bit of surface work to go on these now, a coat of preservative to start with, then the knotting compound. Neal has to cut them to the exact size as well.

All this took half a day, so not much painting during the morning. Well, none in fact, we were in the van going up and down between Winchcombe and Broadway. 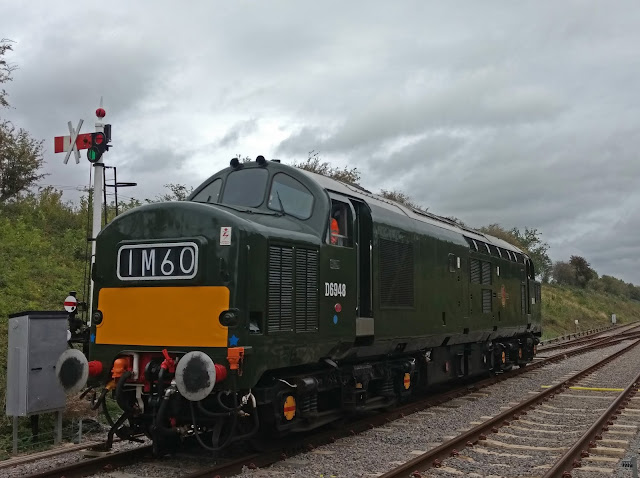 During our sarnie lunch the first of 3 driver experience trains rolled in. Very slowly indeed.

Here is the class 37 running round, outside our mess room. It's still dry, but the afternoon was awful, it absolutely bucketed down. Again. 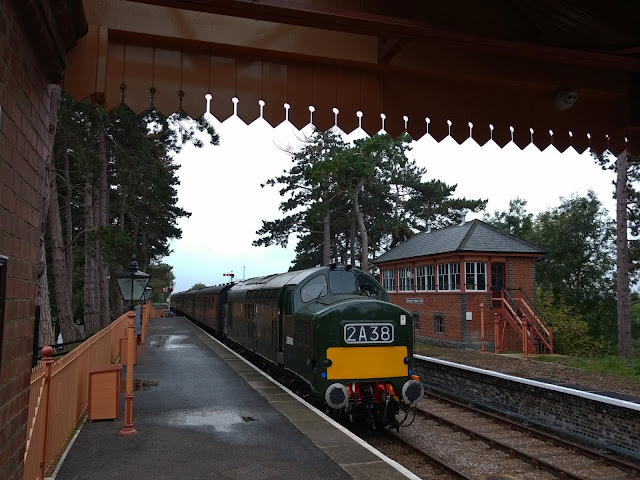 A bit later the second turn rolled in, and we caught it here by the signal box.

You can't see Cleeve Hill (should be visible in the background) so it's going to rain again soon. 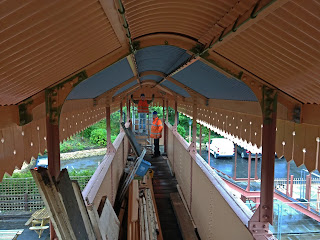 We took shelter up in the centre span, but it was only of limited help. It gets wet up there. Despite the roof and the dagger boards, the rain gets in. It sits on the edges where two angles grip the steel side sheets. Despite the shotblasting, the bridge has started to rust here. With stronger wind such as on Friday the rain reaches right in and soaks the treads inside. This is not good.

John has now completed the top coating of the Cotswold end roof panels - that's three coats of paint applied. Time for a little relaxation, as he and Neal stare over the side of the bridge. 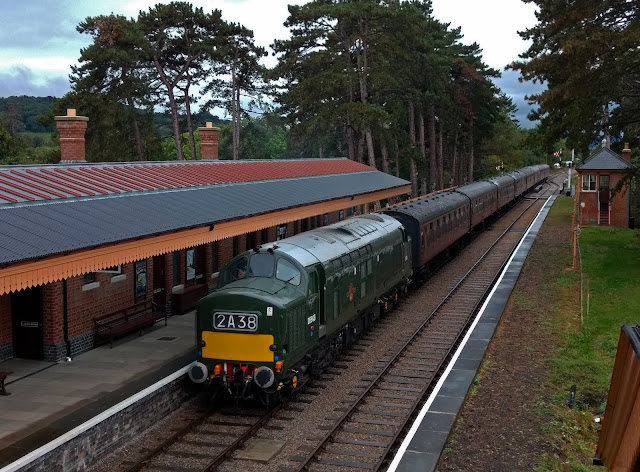 Down below the Growler came in for the third time.

At the moment we are in the privileged position to take these pictures from the footbridge, but in the not too distant future - next season we hope - you too will be able to stand up there and watch, although you won't be able to go down the P2 side until it's been built. 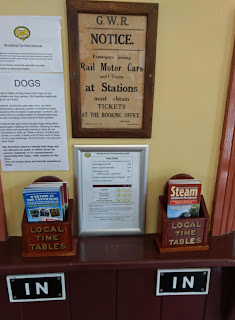 Finally we added a little detail to the booking office, replacing the initial plastic leaflet holders with home made copies of original GWR ones. They are a joint effort: Dave of the Broadway gang made them, while Alex of C&W found the original design, and then lettered them in gold, with black shading. Get your LOCAL TIME TABLES here.

And don't try and pay on board the steam rail motor, you need to buy your tickets beforehand at this booking office! Now all we need is a visit from the steam rail motor. We have seen pictures of one at every one of our stations in the early days, except - Broadway. Why not put that right one day?

The measuring gang was out again today, to size up the more complicated pointwork along the line, the plain line having been largely done now. 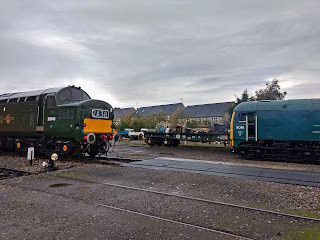 It was busy straight away round our mess coach, as this weekend is Diesel gala and two locos came into Winchcombe at once, one to pick up the third rake and the other to proceed into the station itself.

In the picture is the class 37, which has a surprising acceleration, if there isn't an 8 coach train behind it. It shot out of the picture. 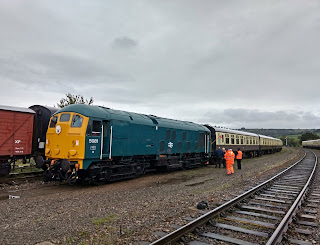 Class 24 D5081 is thumping away outside the mess coach, but we are already on our way to Toddington to do the last turnout there. 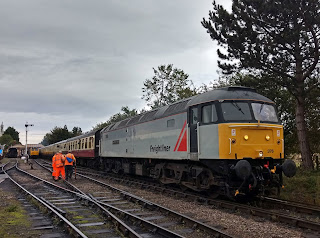 At Toddington we came across Bert Ferrule and Dave undergoing training on the track, and we stood aside to let the class 47 pass. 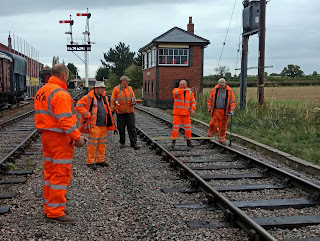 Then we spoke to the signalman and for a while the training and measuring teams worked side by side. 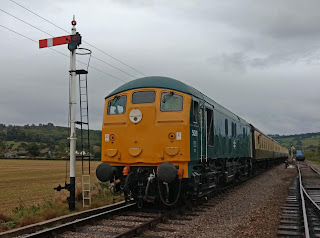 Having extracted its rake from the sidings at Winchcombe, the class 24 made its way to Toddington and beyond.

It's right on top of the turnout we want to measure here. 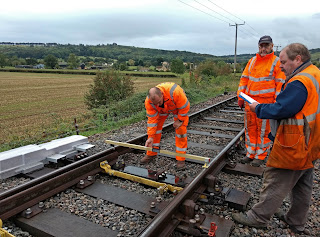 Turnout vacated, we were able to get going, starting with the gauge here.

This new turnout, which we placed as one of a pair a year ago, has now received its point motor, but it's not connected up yet. 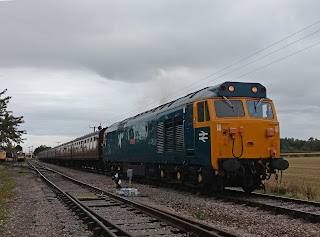 The 'Hoover' then pulled out of Toddington, so we have a few more 'Hoover' pictures in this post, as it's going to leave us soon. 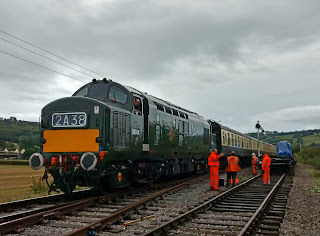 Going the other way, and while we were still on our first turnout of the day, was the Growler. The railway was very busy today, and the car park at Toddington was full. 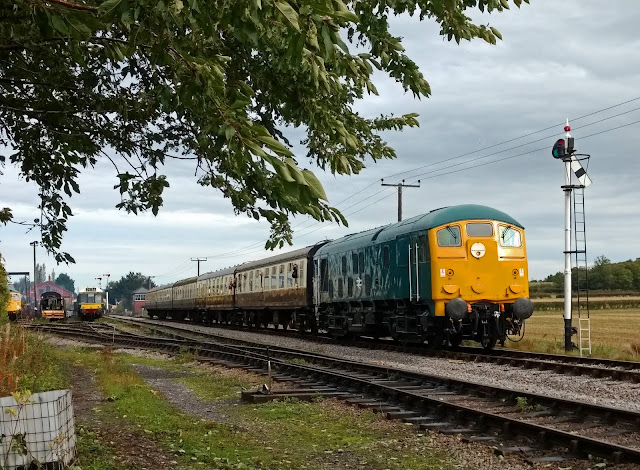 Under a slight glimmer of sun we managed to catch the class 24 with a shorter train of 5 coaches, looking quite realistic as it passes the advanced starter. 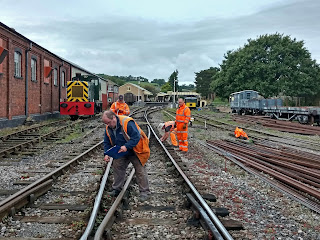 With the southern turnout at Toddington ticked off our list, we went on to Winchcombe to start on the turnouts there.

The first was this one, leading to the C&W sidings. 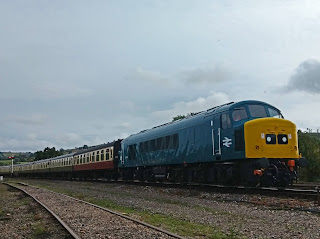 Just before we climbed back into the mess coach for our sandwiches the Peak arrived. There was certainly a lot of variety in the motive power today!

Lunch was very interesting today as we were able to talk to the trainer, and discuss our track access issues and receive a lot of practical advice. 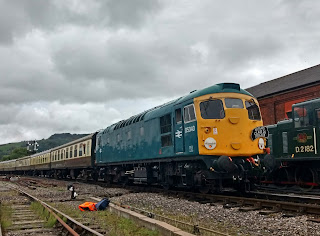 Next in the line up of today's diesel locomotives was the class 26, here just short of the platforms where a crossing train was waiting. This often means that the Toddington train has to wait at the bracket signal, and you get a bit of a bark as it pulls away over the short distance into the platforms. 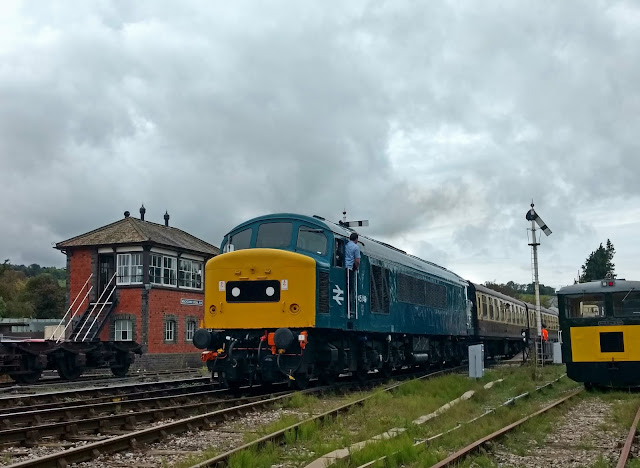 The crossing train this time was our Peak.

The second man is checking that no one is trying to open any doors as it pulls away. People do funny things. 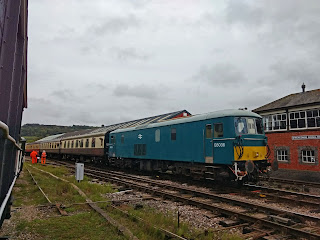 To our surprise the class 73 was also in the parade today. What a lot of different diesel engines on the GWSR !

And finally, as promised two more pictures of the 'Hoover', as it's a rare bird on our railway. 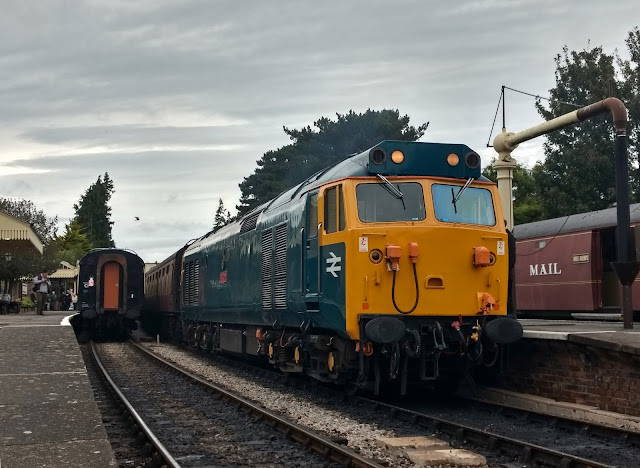 Here is 'Ark Royal', about to set off from Winchcombe.

By this time we were on our fourth and final turnout, that's about as much as we can measure in a day. Next week it'll be the southern turnout near the tunnel, then we move on to Gotherington. 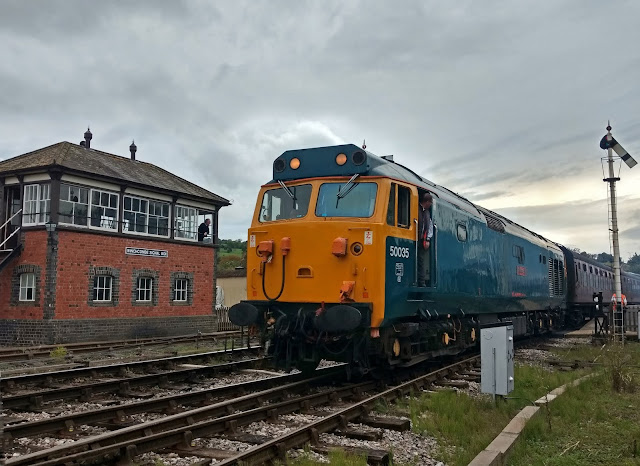 Another successful day for us, and we're about halfway through the turnouts. The closed season is upon us soon, and then we can get on with more extensive and more interesting track works.