Mouldings, and call for help

A grim day of heavy showers and thunderstorms was forecast. Optimistic, we turned up nonetheless but spent the first hour in the cabin listening to the rain rattle furiously on its metal roof. There was always tea to drink. 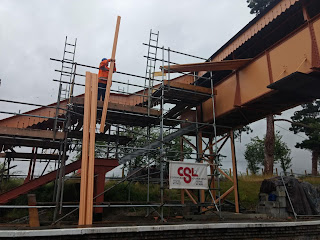 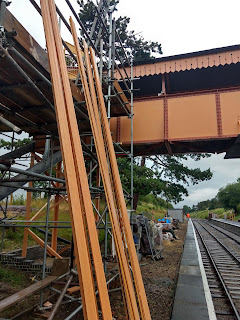 We noticed that the rain let off from time to time, so ventured out for a few minutes in lighter rain to park the boards we painted last time, as well as the remaining mouldings not yet used on the P1 side. Neal hauled them in from on top, and they are now up on the centre span, more or less dry. 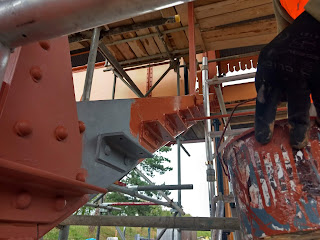 After that, the rain seemed to let off even more, so John had a go at undercoating a P1 stringer (still dry, as under the new corrugated iron roof) and Neal took an interest in the moulding needs for the Cotswolds side of the P1 steps. 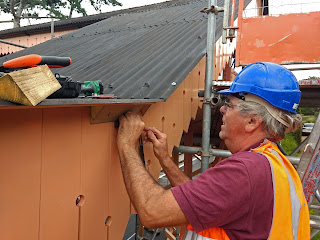 With the experience gained from the slow start on the Malvern side (mouldings up and down all the time) things went a little better on the Cotswolds side. We already knew that the triangular supports needed trimming a bit, so Neal took them off straight away and made them a bit smaller.

He then measured the angles with a bevel (did you know the name for that protractor like device he is holding here?) so that the angled and levelled mouldings would meet perfectly. 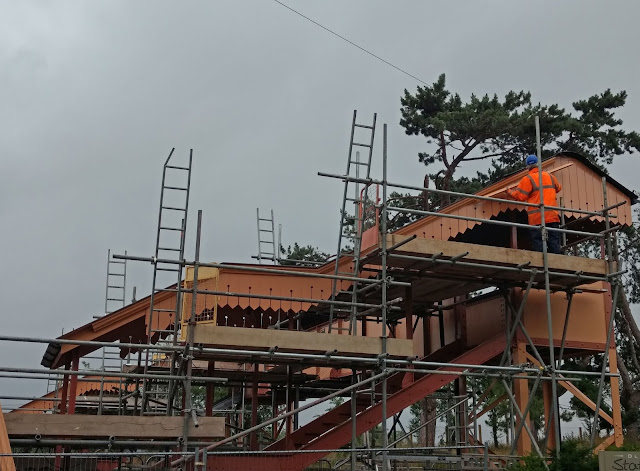 The mouldings then went on pretty quickly. You can see here how they already stretch from the bottom - left unfinished as this is where the canopy overhang comes in - to almost the top. The mouldings then have to go back down again, once over the top of the centre span roof.

The sky remained grey and threatening, but not quite raining down on us. 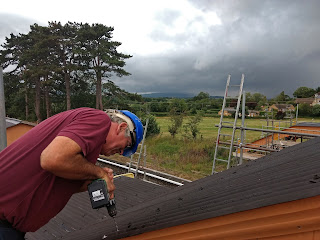 As an extra precaution the overhang on the sheets was also screwed to the mouldings, to make everything quite rigid.

In the background Dumbleton Hill is getting a dose. Would it head our way? 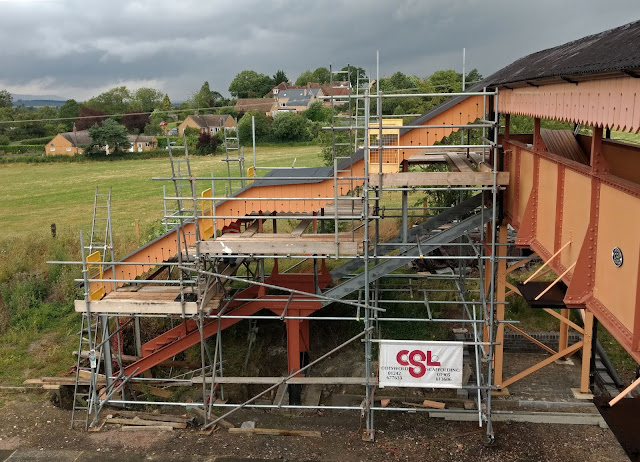 Just for info, here is a shot from one scaffold structure over to the other. Soon the scaffolding will start to come down - the Cotswold side of P1 will be removed in a week, giving us just the time to complete the attachment of the mouldings there, and the application of two more coats of paint. 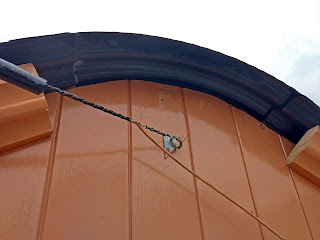 Mid afternoon we got to here: It's all on, except for the curve in the middle. How will Neal do that, with straight pieces of moulding? Originally the GWR would have mounted a shaped piece. Find out next time.

In fact it wouldn't have been the GWR, but the constructors of the footbridge. We have a snippet of interesting information, found at the Dean Forest railway. They have an E. Finch, Chepstow bridge at Parkend. It has the same panels as ours, but is of the slightly older design where the intermediate landing as a quarter turn in it. The cost, we learned, excluding assembly on site which was outsourced, came to £464 7s 4d. So start saving now, for the new footbridge at CRC! 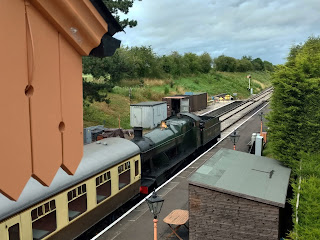 Miraculously the middle of the day stayed dry, although feeling damp and heavy. The thunderstorms never quite made it to clear the air.

A Fire and Drive train did make it though, with 2807 just pulling into the station here. This view was taken from the part of the scaffolding that will be removed shortly, so enjoy. 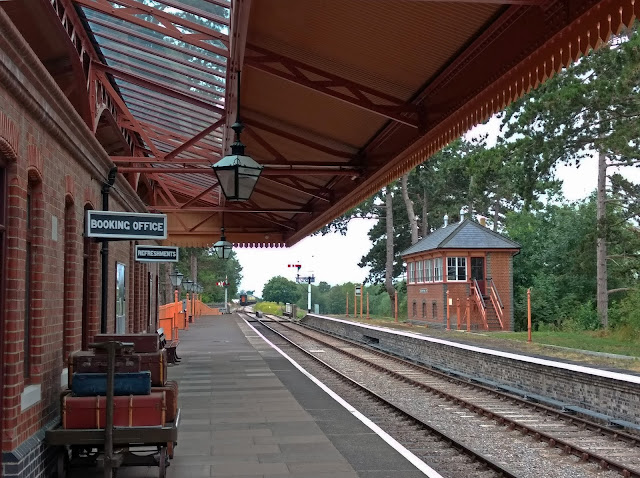 After running round, the train left again, and Broadway returned to peace and quiet, disturbed only by a kestrel mother and its loudly squeaking baby, which followed her everywhere.

Sadly cancelled for yours truly, due to an old back injury recurring. The plan was to continue replacing timbers at Toddington.

Instead, we have a call for help with an old photograph. Can anyone help with identifying the people on it? 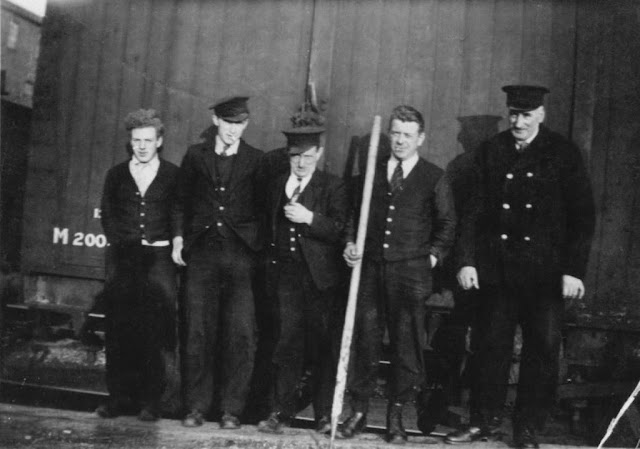 This picture, and 3 others, came to us via a relative of one of the station staff. Unfortunately she died a few years back, and this underlines the difficulty of preserving our heritage in that the people who knew leave us, and with them goes the knowledge of what went on.

We think that photograph was taken in the last years leading up to WW2, and shows railway staff by the Broadway goods shed, possibly on the platform slope leading to the cattle dock.

Can anyone say more, even identify someone?


A look over the fence - Brecon Mountain Railway

A second visit to the BMR was made for the same reason as the first: to hear the sound of a Baldwin exhaust barking uphill.

The BMR have just completed the restoration of their second narrow gauge Baldwin, Santa Teresa No. 1 . On the occasion of our visit she had started running only 2 weeks earlier, after a very heavy restoration including the conversion from a 2-6-0 to a 2-6-2 and re-gauging from 2'6'' to 2ft. The loco was found in Brazil.

Astounding are their plans to build a further two completely new locomotives from Baldwin drawings. One is a very unusual Forney type locomotive, a 2-4-4 where the tender is fixed to the locomotive, so making it a tank engine.

The BMR is quite different from other steam railways. It's a new build narrow gauge line on an old standard gauge trackbed, the former line from Merthyr to Brecon, over the mountain summit and tunnel at Torpantau. 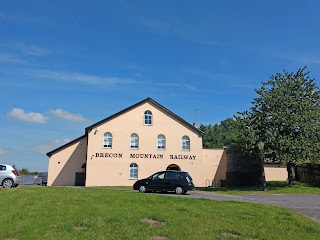 The terminus building at Pant (just north of Merthyr) is a new build and the first impression is that of a Swiss chalet. Is this really a railway station? 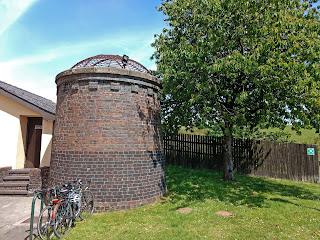 The railway network in the area is complicated. There's the Brecon & Merthyr line, which skips round the terminus, and the L&NWR line, which goes underneath it!

Hence this 'pepperpot' tunnel vent, which is located right next to the station building at Pant, and which leaves the uninitiated mystified...


You buy your ticket at a hatch just inside the front door. The staff (most seem to be paid staff) were friendly and when the plain paper ticket disappointed, they offered to go and find two Edmondson tickets thought to still exist at the back of the shop. That was very kind. 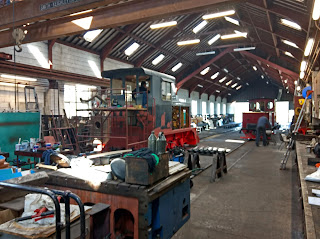 You wander up a long slope inside the building, and pass by a viewing platform of the main workshop.

In the distance is a red Jung 0-6-2 well tank 'Graf Schwerin Lowitz' which did a lot of mileage in the early days since 1981 but which is too small since the opening of the extension to Torpantau.

There's a heavy Russian Tu7 NG diesel too, just off camera to the left. 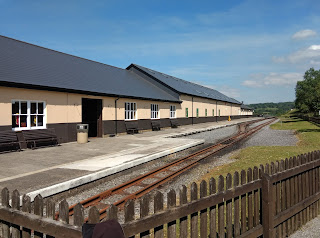 Walk up a second slope, past a model railway, and you emerge on a higher level where the main railway terminus is located. As there was only 1 engine in steam and we had just missed it, there was plenty of time to wander around. There is a lovely path leading to a picnic table off to the right, and this spot affords great views of the valley below, including the line clinging to the hillside for about a mile. You can see the train coming way in the distance. 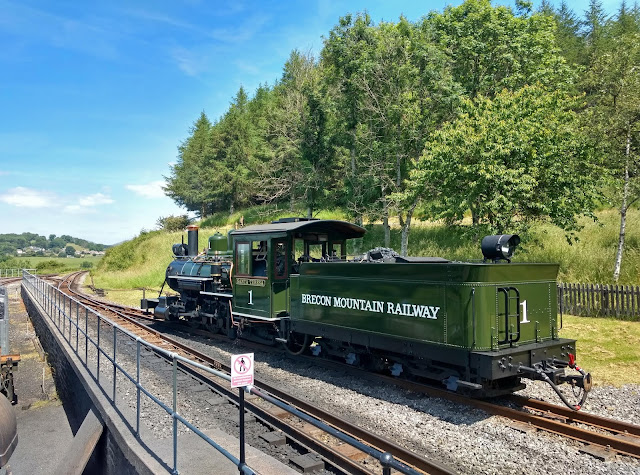 2-6-2 Santa Teresa duly emerged from round the corner, passing by the picnic site (and great viewpoint) which is located just above where the loco's chimney is in the picture. The restoration standard looks superb, and we loved the big searchlight at the back, which carries a builder's plate from Chicago. A genuine American... 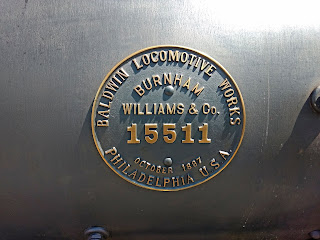 ....but of course the loco had its own builder's plate as well. Constructed in 1897, that makes her 122 years old in principle, although today there isn't much left of the original locomotive, it has been so thoroughly rebuilt.

The fireman was friendly too, a former WSR volunteer who retired to the area. This is certainly the way to be retired! 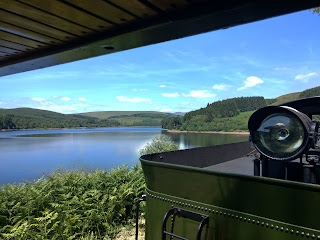 The carriages are in a western style, with a caboose brake van at the end. Those determined to hear the bark of the new Baldwin from as near as possible, and collect some smuts in their hair, can stand on the front balcony of the leading carriage.

The lake in the background is Pontsticill reservoir, built in 1927. Just about half the BMR route follows this reservoir, and the views are superb.


After the line joins a second reservoir and passes a scout camp, it becomes steeper.

You can hear Santa Teresa work hard in this video:

The line terminates at a new terminus, just short of the original Torpantau station and tunnel. This 666yd tunnel, at an altitude of 1313ft, was once the highest standard gauge tunnel in Britain.

The former station, in this wild and remote part of Wales, was only used to tie down brakes and take on water, as no one lived here. It was located near the little conical fir tree in the middle of the picture; the tunnel was off to the right and took the former B&M line nearly 7 miles down Glyn Collwyn to Talybont on Usk, crossing the Mon & Brec canal as it arrived there. It's a lovely spot to watch the narrowboats, and there's a choice of 2 good pubs. 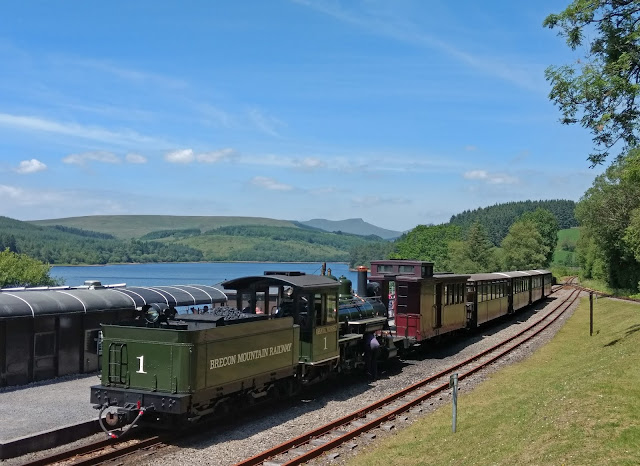 On the way back there's an extended stop by the reservoir. You can get tea and ice cream, but be smart about it, as lots of people have the same idea!

We can't wait to see the new Forney type replica. Work on it has started, including the boiler, cylinders and the bogie, so it's more than just a dream. And you get that wonderful scenery thrown in as well.