Drainage work on the culverts at Little Buckland and Peasebrook farm has proceeded steadily and an end is now in sight. 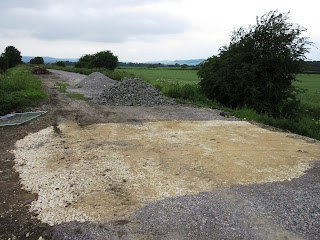 Culvert 5A just south of Little Buckland bridge has been replaced entirely and two new headwalls built L and R. Here is the site now almost fully reinstated, with just a topping of track ballast to go. The current railhead is just out of sight into the curve. 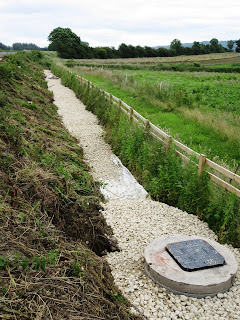 A new item is this French drain, built between Little Buckland bridge and the next culvert along, numbered 4A. It includes two inspection chambers. The field to the right is  a wet one, and includes a small pond, through which the water in culvert 4A flows. It's important that our embankment base stays dry. 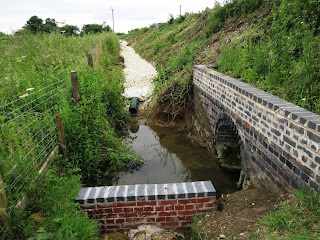 This is the other end of the new French drain, with culvert 4A passing from left (the pond) to right, where it has received a new headwall. Andy P's gang have rebuilt the headwall, and also rejuvenated the drain on the northern side of culvert 4A (from which this photograph was taken).
This drain, also alongside the wet field with the pond in it, was actually flowing quite steadily. 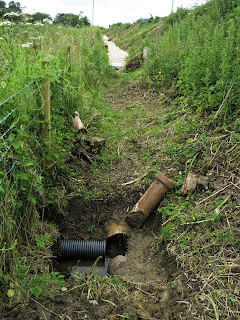 Stepping back a few yards shows the end of the new French drain entering culvert 4A in the background, while in the foreground the drainage gang have discovered an additional supply coming in off the wet field on the left. The end of this pipe has been removed, and you can see that it is completely blocked at the broken end.

Still to do on the contractor's side is the fitting of the large diameter pipe (now delivered to the site) to extend culvert 3A, replacement of the PWay ballast at 5A and clearance of the site.

The activities of the contractor to repair the culverts are the main reason the new track was not extended further than 150yds short of little Buckland. A secondary reason is that we need more new rail of course, having used up remainder of the first consignment at Laverton loop. To deliver the rail, you need the bogie bolsters, and to load these, you need the loading spur at Toddington reinstated. And they are very busy with that, so progress at various sites continues.

A quick visit to the Toddington workshops shows further progress here too. 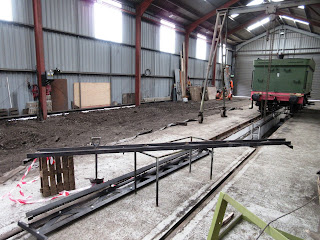 There are now three completed rafters, here stored in the loco running shed. In the rear is the last of the 4 roads in the process of receiving a concrete floor. A volunteer working on the DMU reported how vastly improved this working environment now is, with its clean concrete floor instead of the dusty ballast that once covered the entire floor area of the loco shed. A great step forward.

Back in the workshop, the steel that made an aborted mission to Broadway in error on Monday has been duly delivered to the place where the roof assembly is actually taking place. A fairly sophisticated saw is used to cut the angles to the correct degree as per the drawing of the new canopy.

What was actually under construction at the time of the visit was this: 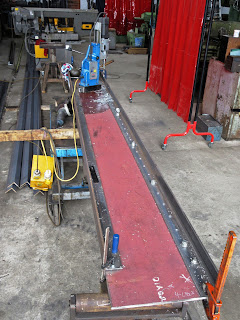 It's the fascia board, the flat piece of steel plate that runs along the full length of the platform side canopy edge. It will eventually be over 40m long, so is being manufactured in sections.

The mag drill at the rear was being used to drill the rivet holes. The bolts at intervals visible on the right will, once the rivets are in place, be removed and the holes used to secure the woodwork on which the dagger boards along the platform edge will be mounted. The staggered angles at the end are so placed to allow a secure attachment of the next section.


Just to show you where this piece is going, here is another shot of the original at Toddington: 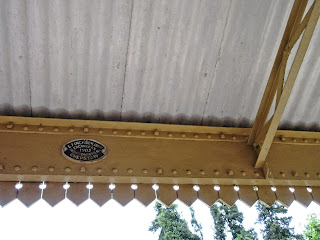 In the last blogpost we showed you the rafter on the right, and the new piece being manufactured is the flat, riveted piece running left to right, to which it is attached. The daggers, with their single row of holes (a double, staggered row is used on the footbridge) are behind. The roof covering is 18 gauge corrugated iron at this level, glass further up. We have been given a source for replica glazing frames.

We'll check in at the workshops from time to time to give you updates as the canopy takes shape.