A small PWay gang completed lifting the last panel on Saturday, and removed the last concrete sleepers, so that only the ballast now remains on the loop line at Laverton. The through line remains in place, as do the two turnouts, which still need to be dismantled (no 'e' this time!) and replaced with plain track. 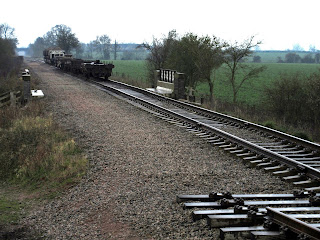 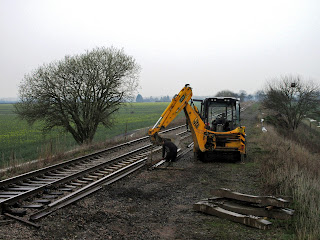 Steve, the contractor, was on site today to a). Start loading the ballast into the empty Dogfish, and b). Start dragging the loop rails over to Broadway. Here we see him attaching a pair of rails to the back hoe of the JCB, ready for the 1 mile journey to Broadway. 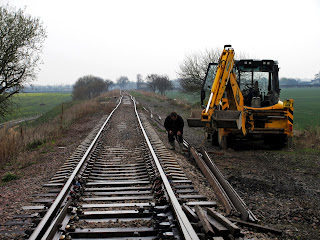 This is the view immediately north of the northern turnout. In the distance is the old headshunt, quickly laid, which will also be replaced. 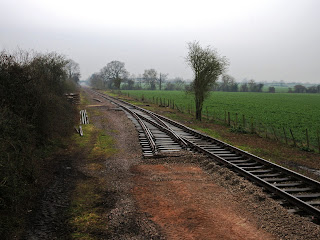 Looking at the southern loop turnout here, you can see that the ballast bed laid only a couple of years ago, is being recovered. Nothing must go to waste. This ballast, almost new, will be used elsewhere on the railway. 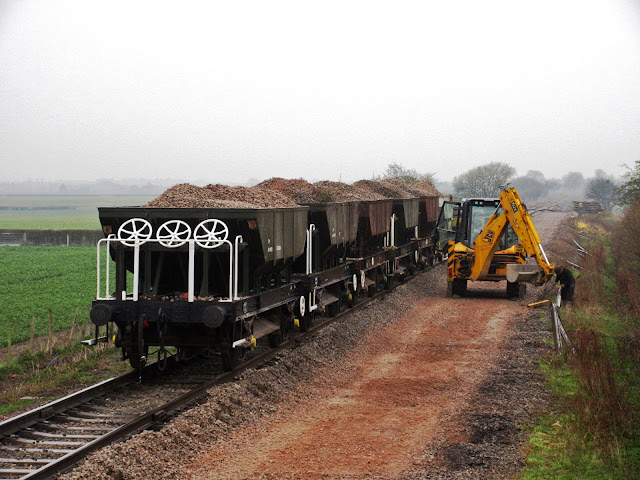 This shot shows about the middle of the loop. Steve has made a good start with recovering the ballast here, and has filled 5 or all 6 (the exact number escapes me) of the Dogfish. They now need emptying and returning to Laverton to complete the job.
This part of the track is in good condition, but needs welding up, so has to be cut to remove the bolt holes, dragged to close the gaps, and CWR welded. There's still plenty of work here for the gang to keep busy, while we wait anxiously for the outcome of the share issue. There has to be enough money in the kitty for us to complete the job. 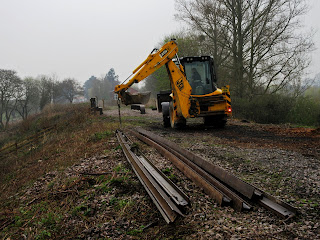 At the other end, just short of Broadway, Steve is depositing the rails that he has dragged for a good mile or so by the Childswickham Road bridge. It's the first rail to arrive at Broadway ! Another great step in progress. From here it's just a short drag to where they will be used once the PWay team gets here. They will make a start at Springfield Lane bridge, and work back. This will happen once the work at Laverton is complete, and the kitty is looking good enough to buy rails and ballast.

Broadway station was very damp today, and the steady rain prevented all but two short rows of blues being laid. We did try!


Here is a view of the BAG team taken last Wednesday, when the share issue was launched by Pete Waterman. Ian Crowder took this photograph of the happy gang. Your blogger is in there somewhere :-)