Exploration of the Broadway embankment

The extension is coming nearer to Broadway!

For this week, a substantial 45T excavator with an extra long arm was hired in to dig 15 trial trenches into the embankment at the level of the Cravan Club, or former goods yard. 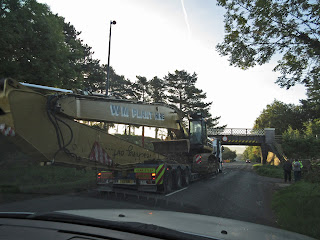 At 8am, the substantial digger was parked outside the entrance to the permissive footpath. Check out the size of that jib!

During most of the day, your blogger was at work at CRC2, but Broadway is on the way back and this allowed a quick visit to see what they had achieved so far. 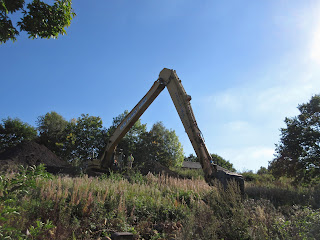 The excavator had manoeuvered up to the top and was digging a series of trenches into the embankment, which is pretty substantial at this point, as it once held 4 tracks. The two central ones held the main running lines, and on each side of them there was a siding. The area of the siding next to the goods shed has been sold off, leaving the space for the two running lines and a siding, Malvern side, next to it. 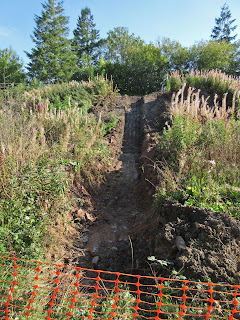 This is one of the first trenches dug. In the foreground there is rubble from the Mythe bridges at Tewksbury, then the trench gets shallower towards the top, with a solid clay bottom all along. 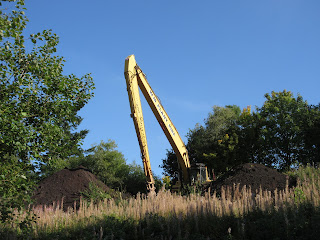 The next trenches were somewhat deeper, in a quest to determine the level of the clay underneath.

A great deal of ash was removed from near the top. 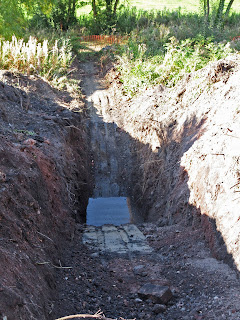 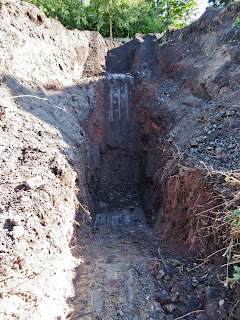 These are the second and third trenches, rather deeper and with evidence of red ash from something like a steelworks or a foundry above the clay. One has filled with water, which however drained away after a short while. 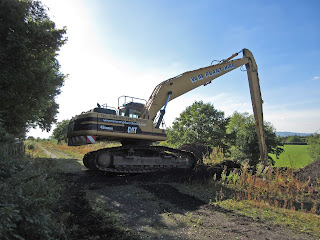 This picture shows the main line trackbed quite well. The Malvern side siding was on the right, with the goods shed siding, sold off, to the left behind the trees. 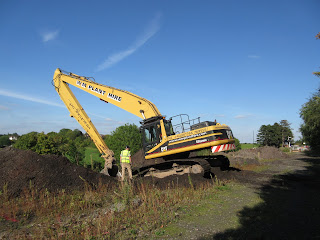 Looking the other way, we can see Broadway station in the background. The excavator has dug into the Malvern side siding area, to ascertain what it is made of. 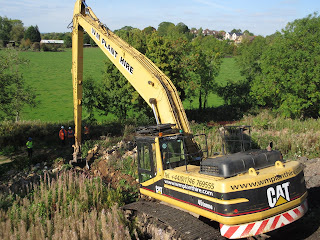 Looking down, accompanied by a contractor, we can see the height of the embankment, and the length of the trench being dug. A video of this happening is here: 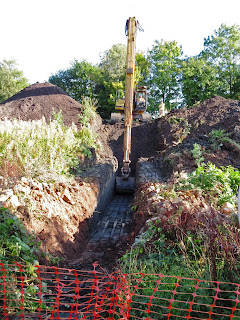 The deepest trench dug so far was the fifth one, seen here. Clay is in the middle, ash in front of the excavator. No water here though.

The excavator is here for at least all of this week. With 5 of the 15 trenches already dug, progress was good, helped by the dry weather.

Once we know how this embankment is constructed, conclusions can be drawn and any corrective measures considered.